Geared Up to Win 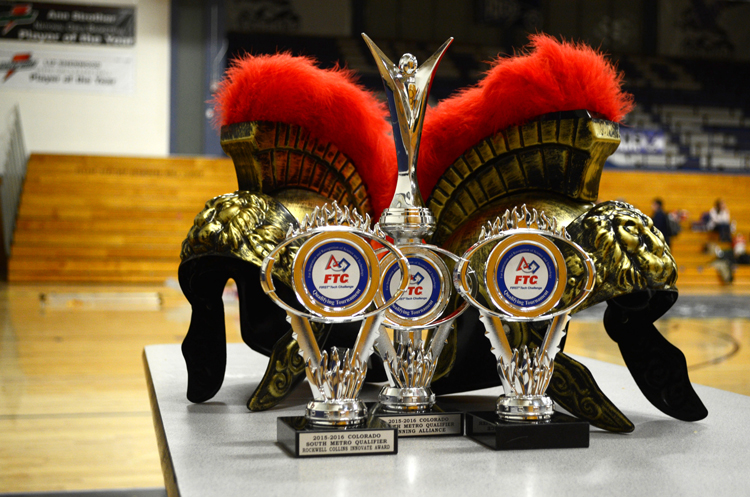 On February 6th and February 13th, teams from TJ’s robotics program took part in two Regional qualifier competition held at Highlands Ranch High School and the Lotus School for Excellence. Students from the Introductory, Advanced, and Pathways classes were able to compete, creating a unique range of skills and experience amongst the teams. Conclusively, two of TJ’s teams will advance to compete in a state-level competition and represent the school again on February 27th in Westminster, CO.

The competition “First Res-Q” is part of FIRST (For Inspiration & Recognition of Science & Technology) Robotics, the nation’s biggest robotics program. In this challenge, teams had to accomplish a series of tasks, including climbing a ramp, doing a pull-up from a bar, putting balls into goals, and parking in various areas. Teams have a 30 second autonomous period, where all actions must be pre-programmed, followed by a two minute driving period, where the robot is controlled by drivers using controllers and Android phones.

While these competitions can be exhilarating, new guidelines for the competitions were added this year, creating some frustration for students. New software and related technical difficulties provided competitors with a challenge. “Probably the most challenging part of the competition this year was having to switch our mind sets from Lab View (previous operating system) to Modern Robotics and Java/Android Studio,” explained sophomore James Oss. “Because we were taking so much time to learn the new system, we didn’t have as much time to build. Although we had many hardships we still had a great competition and came out on a high note.” Since this new program caused many robots to not work properly, mentors and coaches assisted teams so that they could be successful during their matches. “I think that FTC this year has been a struggle that at times seemed daunting and maybe even insurmountable, but the students were really able to push through it and remain positive,” said Matt Santambrogio, robotics instructor and coach. “I’m happy with where we placed and I hope that next year we continue to improve.”

Out of 27 teams at the competition, ten of them represented TJ. “It’s pretty funny to see people’s reactions when we walk into the competition with more than 50 students,” said Eileen Adair, who teaches introductory robotics. “We’ve developed quite a reputation for dominating these competitions, which is a testament to the students’ dedication and enthusiasm.” Each round of competition consists of four robots on two different alliances, almost all of which contained one or more TJ teams. These matches allowed teams to retain their competitive spirit while still supporting their fellow Spartans.

After the qualifying matches were completed, the final rounds began. During the final matches, the top four teams chose two additional teams to join their alliance. Five TJ teams were featured in the semi-finals, and in the end, showed that they were ferocious Spartans. Two teams from TJ will continue on to compete on the State level, comprised of sophomore and junior students.  “I feel very fortunate to be able to continue on to State,” explained junior Jacob Hermelink. “Robotics has taught me to overcome challenges, push on, and execute with precision.” Hermelink is a member of team “Cyborg Spartans 6246,” which finished first at the end of the elimination rounds. His teammates, junior Tegan Suzuki and sophomore Chloe Richter are excited as well to continue on to the next competition. “My goal for State is to make the best of the experience,” said Suzuki. “Mainly, all I want to do is go have fun like my team always does when we go together.” In addition, team “Sparta Familia” will move on after winning an award based on their Engineering Notebook, which documents their building process. Junior Hunter Holmes and sophomores Paul Kuenzel and Camy Guenther make up the ambitious team. If these teams perform well at the state level, they have the chance to compete in one of the Super Regional competitions in California later this spring.

On February 13, teams “Spartan Four” and “Spartan Union” had a second chance to compete in another regional qualifier at the Lotus School for Excellence in Aurora, CO. The qualifier turned out to be another invigorating competition, and the two teams from TJ performed well. “It was refreshing to see how the different teams could all come together and help each other out as a community,” said freshman Andrew Carpender.

TJ’s robotics teams fought hard during recent competitions, and the qualifying teams are sure to conquer at the State level. With hard work, grit, and a dynamic robot, robotics students showed once again that they are unstoppable.