Getting Back on the Green 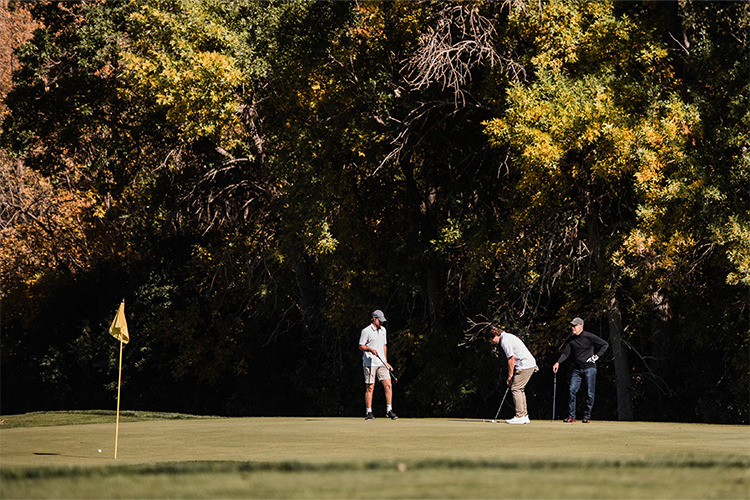 Three of TJ’s golfers on the Course chipping onto the green. photo courtesy of yearbook staff

The TJ Boys’ Golf team wraps up their 2021 season after a long hiatus from a normal season.

As the first season of sports comes to an end, the Thomas Jefferson Boys’ Golf team has wrapped up their 2021 season. The boys returned to the courses after COVID-19 had affected their season last year, but they were back in action and ready for a more normal and successful season.

This fall season did not just take the boys back to a regular season, but also brought some changes within the team. Teachers Justin Kaplon and Stephanie Sturm, the two new golf coaches for both golf teams at TJ, took the position of the previous coaches, Mark Smith and Stacey Fornstrom. Kaplon took on more of the role as the head coach, while Sturm acted more as an assistant coach. The boys’ team had eight spots total between Varsity and JV and the coaches continuously rotated out the players for different tournaments giving multiple opportunities for seniors to play during their last season. During these tournaments the team played against other Denver Public Schools, such as George Washington, East, South, Northfield, and many more.

Senior Kyle Hrin, one of the students to advance to regionals this year, mentioned that the golf tournaments were one of his favorite parts of the season. He said, “Getting to meet all the new people from all the different schools in the golf tournaments was my favorite part. It was just fun to meet new people.” Also mentioning that he was able to see some people he has known for a long time, but had not seen in awhile. This year was Hrin’s first full season playing since he joined the team half way through last year. However, for junior Keegan French, it was his third year playing as a Spartan golfer. His favorite thing was being able to connect with other students who also played, saying “one of my favorite parts was hanging out with my buddies.” French noted that he enjoyed playing in multiple tournaments as well.

At the end of most schools’ golf season, schools will send their players that qualify for Regionals. This year TJ ended their season by sending three students up to Montrose, Colorado, to play at Regionals. Seniors Dustin Bailey, Dylan Nelson, and Hrin took the five hour drive up to Montrose to represent the school at the tournament on the 20th and 21st of September. Hrin talked about the fairway in Montrose highly, mentioning that it was “really nice and a hard course.” Unfortunately, none of the boys made it to state this year; however, it is always great to have students from TJ going to participate in such big events. Ending this 2021 season by sending three seniors to regionals is great for the TJ boys’ golf team, and although the school will miss all the seniors who played, Spartan’s can’t wait to see how next year’s season goes.