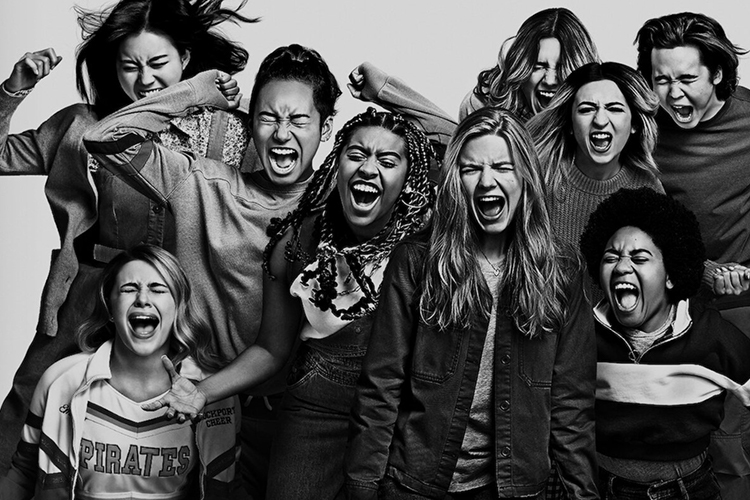 Meet the new faces of feminism! photo courtesy of Netflix

Feminism has always been a controversial issue. As with any injustice, the mistreatment of women is hard to understand until it happens to you or someone you care about. It is easy to think about feminism as a “women’s movement,” discredit it by highlighting many issues that are not addressed, or even idolize it by believing feminism is “salvation.” However, like any human movement, feminism is simply about learning even when you make mistakes. This is what Moxie is about. This is what happened to director Amy Poehler.

The movie is focused on Vivian (portrayed by Hadley Robinson), a sixteen-year-old white student at Rockport High School who experiences a “feminism awakening” when she meets Lucy (portrayed by Alycia Pascual Peña), an Afro-Latin new student that experiences harassment and bullying by the school’s golden boy Mitchell Wilson (portrayed by Patrick Schwarzenegger). Moxie tells a story teenagers already know—a cliche story that will be enjoyed, but also a story that is very hurtful.

Growing up as a Latin girl surrounded by people of different skin tones, especially brown, white, and black, I never thought to wonder whether representation was important. I did not feel the need to see a character that looked like me, or my friends, in the thousands of American movies we enjoyed watching: Mean Girls, Lemonade Mouth, 10 Things I Hate About You, Freaky Friday, and Confessions of a Teenage Drama Queen, among others. I did not acknowledge the racist components of movies where the Latin, immigrant, or African-American girls had to be saved by the white hero.

For me, it was incredible to see a group of women supporting each other, being each other’s heroes, being strong and fierce outside of beautiful and kind. I was never taught to distinguish people by the tone of their skins, the way they talked, or the language they spoke. They were simply girls, and if they could change the world, then I could do it too. When I first watched Moxie, the familiar feeling of adrenaline, hope, and inspiration ran through my veins.

And why wouldn’t the movie be about a white girl?

Watching movies now feels different because I notice bittersweet things that I did not notice before. Feminism is often represented by the rebellions of white girls, by the power of white girls, but feminism has other faces, other skin tones, and other dialects. It is, in my belief, an unconscious flaw, but an issue that must be addressed. Representation does matter. Stories do matter, and trying is the only way to improve it.

“We made a ton of mistakes. We argued with each other. We weren’t intersectional enough.” declared Lisa, Amy Poehler’s character in Netflix’s new movie Moxie, “But what else are you going to do? Nothing?”

When I watched Moxie for the second time, it was painful to see the way Claudia (portrayed by Lauren Tsai), Vivian’s best friend and a first-generation Chinese-American immigrant, was dismissed when she could not catch up with the “rebel steps” Vivian and her new friends were taking. It was painful to see Claudia’s conflict so underappreciated and unexplained. It was painful to see how the same girls that demanded to be understood, valued, and respected, neglected to understand, value, and respect the fight of a sister.

At least Claudia demonstrated that there are different ways to protest and support a movement. Then again, that is why feminism is about learning. Understanding the flaws portrayed in the coming-of-age Moxie movie—committing the mistake of poor representation or neglecting to address the clashes of beliefs and cultural perspectives—is a step on the path towards real change.

The path is challenging, and many mistakes will be made along the way, but without these mistakes, feminism would not be feminism. It would not teach anything; it would not improve.

Moxie tried to portrait the spectrum of feminism, but it is too wide to be conveyed in a couple of hours. In exchange, Moxie reminded us of something more important: to try to change the world.

Do something. It may not be the best, but it will be a start.