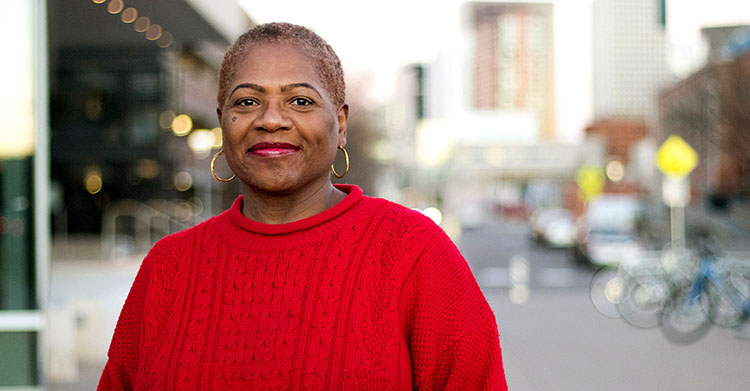 Delores Leslie talks about her educational journey from being a paraprofessional to getting her degree in special education.

On the hunt for a job, Delores Leslie was looking for a school to start her career as a first-year special education teacher. Unable to find a job, she returned to TJ in August to pick up where she left off last year. Little did she know, that there was a last-minute opening for a special education teacher at TJ and she received a call from principal Mike Christoff asking her if she wanted to take the position. The very next day, she was brought in for an interview and the position was hers. Leslie has lived in the United States for 30 years and relocated to Denver 19 years ago. She started her career in special education when she began working as a paraprofessional at Place Bridge Academy. When she found out that two of her students were transferring to TJ and were in need of someone who knew about them and help them with their accommodations, Leslie stepped up to the plate and offered to come with them. For the next ten years, longer than she expected, she would be working with children who have special needs at TJ.

Leslie wanted to go back to school after she had her son, but whenever the opportunity would surface the time was never right. When she moved to Colorado, the burning desire to go back to school returned but she didn’t know what to study. However, after all of her years working as a paraprofessional, she knew she wanted to major in special education. Although getting her degree was hard work, Leslie did not regret going back to school. “First when I started going to Metro I was excited and motivated to accomplish my dreams, but I didn’t do well in my classes so I dropped out for a year and during that year something in me just kept telling me to go back. When I went back after about a year and a half, I struggled. It was hard to reach the finish line but I did it. I was fulfilled and my dream came true.” explained Leslie.

That burning desire Leslie had led her to walk across the stage of Metropolitan State University On December 14th, 2018. She received an individualized degree titled Educational Studies for Specialized Populations. She felt proud of herself, overjoyed and sad that she’d be leaving the university but ready for a brand new chapter in her life. Grit, patience and a great ethic can help one cross their own finish line but struggles can cause one to give up. Leslie’s story is a reminder to all that education and learning has no age restriction. People must listen to the burning desires in their hearts when they want to achieve a goal or dream and never give up.  From the beautiful West Indie islands of Trinidad and Tobago to the ever so marvelous mountain peaks of Colorado, Leslie’s journey to become a teacher makes one wish they were as glorious as Delores!