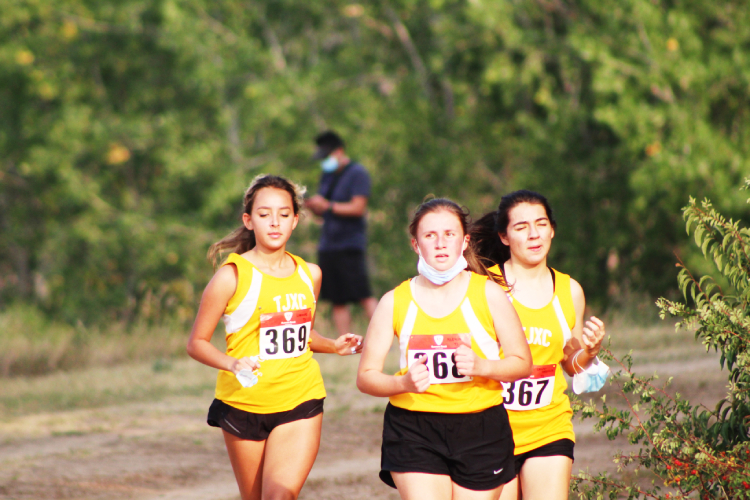 Despite the many challenges of this year, Thomas Jefferson High School’s cross country team showed great resilience during their season.

Many sports have been affected as a result of the ongoing pandemic. Many regulations have been put in place to keep all the athletes, coaches, officials, and spectators safe. Some of the regulations like wearing a mask at the beginning of the race have proved to make some activities, especially running, a challenge. However, TJ’s cross country team faced these challenges head-on and still had a very successful season.

Led by Jessica Popper, a United States history and psychology teacher at TJ, the Spartans ran countless miles around the TJ track, the neighborhood, and the Highline Canal. Running, to most, is very difficult, but these runners always found the joy in it. Whether it was practice or meets, they always supported each other and kept each other on track. Senior Olivia Cech stated, “We [all got close] pretty early in the season, so it was easy to encourage and cheer each other on during practice and meets. We have a common passion, and it was really fun bonding with the team.” It is not easy running long distances, but these athletes showed great resilience to finish the race. All their work and effort definitely showed in their meets. Popper stated, “We won two meets this year, and we hosted a meet at Bible Park for the first time ever, in which many runners did exceptionally well.”

This season looked a lot different from past seasons. Cech stated, “Obviously this was one of the weirdest seasons I’ve had and it did get really hard at times with all the rules and policies. [For instance,] only being able to take your mask off once you’ve broken away from a running group and always having to get our temperature taken before we could start the practice.” All the new rules and policies surrounding students’ participation in sports were definitely something new that the team had to overcome. In addition to the new COVID-19 policies, the Colorado wildfires had some runners concerned about the air quality. Junior Gavi Fox explained, “The air quality was terrible, and if that wasn’t enough, I had to wear a mask most of the time.” In addition to COVID precautions at meets, the team had trouble recruiting new athletes. Popper stated, “We had a much smaller boys team—many runners didn’t return this year and it was challenging to recruit runners due to the fact that we weren’t in physical school this semester.” However, these challenges did not get in the way of the athletes; there were still many moments of triumph this year. Cech stated, “My teammate Kate Little and I each won a race. and it was really special for both of us to experience that kind of rush. I had never won a cross country race in high school before, and it felt so good to know that all my hard work had paid off.” Personal best times, victories, and advances in running technique are just some of the ways that the cross country team made light of this strange season.

This season, TJ’s cross country team had twelve runners—six girls and six boys—go to the regional meet. This group of athletes has always gone the extra mile, and their incredible season has shown that. This season will be unforgettable and so will the memories that came with it. Popper recounted, “My favorite moment from the season was watching the girls absolutely crush our meet against West and Regis Groff. I almost cried watching Olivia Cech take first place and then seeing the five other Spartan ladies cross the finish line shortly after her.  We earned the best possible score for that meet, and it was really incredible.”