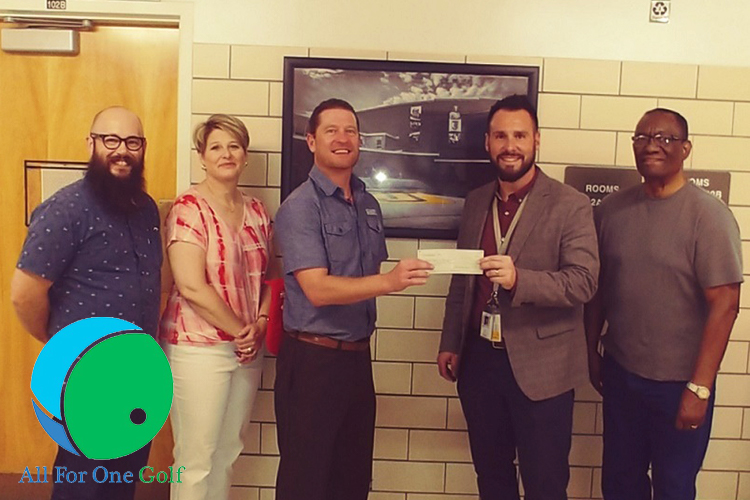 The All For One Golf Tournament is the epitome of community engagement, as the day of golf raises funds for four neighborhood schools, including Thomas Jefferson High School.

A beaming sun with no clouds in the sky marked a perfect June morning as teams of four gathered at the green hilltops of the Wellshire Golf Course at the last All For One Golf Tournament. The golfers’ loaded golf bags displayed a set of clubs, ready for action at 7:30 a.m.. The ever-present lighting from above illuminated friendly faces as the community prepared to enjoy a jam-packed Saturday of hopeful aces and the Principal’s Cup Award. No more than five hours later, the tournament came to a close and tired golfers moved to sit on the relieving cushions of chairs. The sound of laughter reverberated around the Wellshire Event Center as people reminisced with accounts of the day during the ensuing luncheon. This tranquil scene will play out once again at Wellshire Golf Course next month, on Saturday, June 12th. The 2021 All For One Golf Tournament will unfold, presenting another day of community involvement and giving back.

The first seeds of the golf tournament were planted 10 years ago, when members of the Southmoor Park South Neighborhood Association (SPSNA) came together and thought about hosting one. Community engagement was already embedded in this process, so involving the schools in the Southmoor Park neighborhood seemed to be a given. Reduced school system funding also served as a primary motivating role, as beneficial activities were being removed for students. Samuels Elementary, Southmoor Elementary, Hamilton Middle School, and Thomas Jefferson High School each receive 25% of the funds from the tournament annually; these donations have gone toward bus stipends for field trips, studying materials, decorative art for community rooms, and other specific needs. “[It’s] All For One because of those four schools; whatever proceeds we get (now there are no salaries in the organization or anything like that), whatever the net proceeds are they go to the four schools equally,” John Boozer, tournament director, stated.

Organizing the event began in February when notices were sent to golfers to organize their foursomes. Boozer and his colleagues have created an effortless sign-up process, as teams sign up on the tournament sign-up page. This registration includes a $105 payment per player that covers green fees, a cart, lunch, and prizes. A similar sign-up process extends to sponsors for the tournament, as most of the money collected for the schools comes from advertising local businesses. Tickets purchased for door prizes also contribute to these proceeds.

These processes define the All For One Golf Tournament, as all Boozer asks for is community involvement and golfers. He also encourages schools to “open their hands and take our money.” This was not possible last year as COVID-19 canceled the tournament, but this year brings hints of normalcy as the Wellshire complex abides by city health requirements. This presents the opportunity for Thomas Jefferson High School to acquire the Principal’s Cup again, as they received it two years ago. Many of the golfers who participate in the tournament live in the surrounding area, so they attended the supported schools or have kids who currently do. This brings teams together that can sign up to represent any one of the schools, and the winning team is awarded the Principal’s Cup trophy. For those not representing the schools, the All For One Golf Tournament still provides a means of support through signing up, playing quality golf, and helping the schools.

Boozer highlighted the gratitude he has for the community as they contribute money to the schools in a fun manner. “I think everybody feels good about that,” he reflected. Investing in the community does not stop here, as the tournament showcases friends’ businesses with visibility to 80 tournament participants. This advertising extends to anyone, reaping benefits for all, but the title sponsor rests with American Family Insurance under the Bryan Dean agency. Dean served alongside Boozer on the SPSNA board, so they have been involved in the tournament together since the beginning. Boozer makes it known that “[the tournament] is kind of like a family, because everybody gets to know everybody.” These connections are long lasting, as this year marks the seventh annual golf tournament. These meaningful relationships and every dollar going back to the schools encourages Boozer to continue hosting. “It’s amazing what a school can do with an extra thousand dollars each year,” Boozer remarked. In fact, one of the benches at the front of TJ was paid for with funds from the All For One Golf Tournament. Boozer acknowledges that this and other implementations of the granted money are not major, but they show that the community cares. He stated, “We never set out to be the biggest, just the best.”

With a clear focus on community, this year’s tournament is special as it will commemorate Susie McLure, who passed away since the last tournament. The women’s long drive will be dedicated in McLure’s name with a special trophy, giving all the more reason for people to participate this year. All the information regarding the tournament is linked here. As Boozer encourages, “If you’re not a golfer, then be a sponsor.” There is a place for everyone, as the All For One Golf Tournament calls the community together to do good, for good.