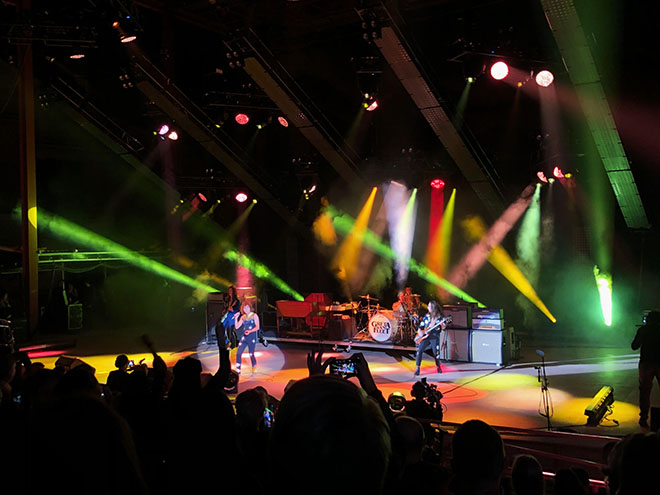 Greta Van Fleet debuts at Red Rocks after gaining popularity over the past ten years. photo by Georgia Hartley.

On Monday, September 23rd, rock and roll fans from all over Colorado flocked to Red Rocks to experience the magic that is Greta Van Fleet. Around 4 p.m. one could not tell that a concert was about to happen. By 6 p.m., people lined the entire parking lot waiting to go in. The crowd was full of people of all ages and backgrounds. One woman wore a shirt that said “I’m 80 and I love Greta Van Fleet.”

As we waited in line, everyone chatted anxiously about the show. Even people we didn’t know talked to us. When security released the lines into the venue, there was a rush for the seats. Since the whole show was general admission, everyone vied for the best seats. Security yelled at people to stop running, but no one listened. We managed to make our way down to the sixth row from the stage. We watched as the stage crew moved instruments around in preparation for the opening act. At this point, the venue was pretty empty, but as the show neared, people were packed into every possible section.

Around 8 p.m., Shannon and the Clams opened the show. The band, which formed in 2009, mixes the rockabilly sounds of the ‘50s with the punk rock sounds common throughout the ‘80s and ‘90s. By the second song, they already had the audience on their feet. As their set wrapped up everyone anxiously awaited the arrival of Greta Van Fleet; chants of “Greta, Greta, Greta” came from various sections of the crowd.

By 9 p.m., Josh Kiszka, Jake Kiszka, Sam Kiszka, and Danny Wagner took the stage. Massive cheers erupted throughout the crowd as the first few bars of “The Cold Wind” began playing. From the moment Greta Van Fleet took the stage, we were instantly at a ‘70s rock show. Before us stood four men, with hair down to their hips, dressed in bell-bottom jumpsuits and suit jackets covered in flowers and leopards. Everyone was on their feet cheering and singing along with the screaming vocals of lead singer Josh Kiszka.

After an hour and a half of explosive rock and roll, Greta Van Fleet closed their set with “When the Curtain Falls,” but the audience had not had enough. For ten minutes, screams echoed from the crowd for more; the band delivered. When they finally came back to the stage, they played “Lover, Leaver” and closed their encore with a ten-minute long, electric version of their debut single “Highway Song.” After the band left and the lights came up in the amphitheatre, people streamed into the parking lot, buzzing about the rock show we had all just experienced. People said it was the best show they had seen in years and just about the only real rock and roll show you could see in 2019. One person even said it topped The Rolling Stones tour.

In their seven years as a band, this was Greta Van Fleet’s first time performing at the iconic Red Rocks Amphitheatre and they absolutely blew the crowd away. The band, who originated in 2012 out of Frankenmuth, Michigan, is comprised of the three Kiszka brothers and longtime friend Danny Wagner. The story behind their name is quite an interesting one. Greta Van Fleet is actually the name of an 80-something-year-old woman from their hometown who just so happened to be around for one of their early gigs. Her name is actually Gretna Van Fleet, but the band dropped the n because Greta just sounds better.

The band, who incorporates “mama” into every song, is often compared to rock and roll legend Led Zeppelin, even called Little Zeppelin or Little Led at times. Some people praise the reimagined sounds of Zeppelin while others believe Greta Van Fleet is nothing but a knock off. Despite the controversy surrounding their sound, Greta is nothing short of a new-age rock and roll band with a tribute to ‘70s rock band Led Zeppelin. They continue to prove themselves and their sound with shows like their recent Red Rocks performance.

Greta Van Fleet debuts at Red Rocks after gaining popularity over the past ten years. photo by Georgia Hartley.