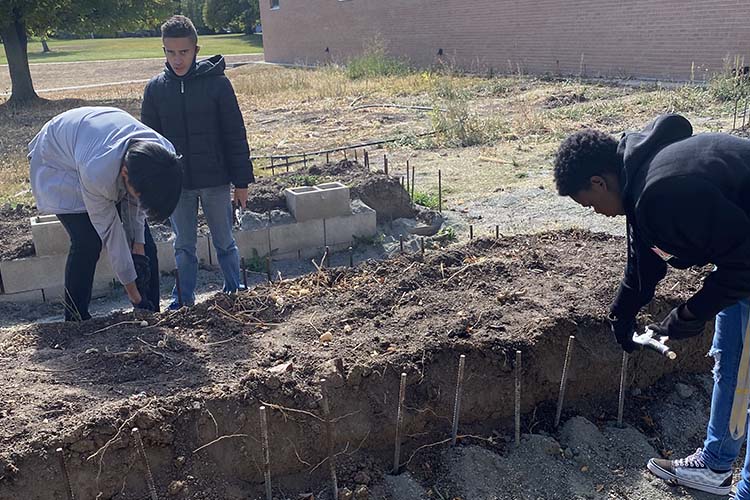 Spartans deconstructing the flower beds to prepare for the construction of Americans with Disabilities beds next spring. photo by Maria Goergen

After a few years without a successful growing season, the Spartan Garden is looking to make a comeback.

After an unsuccessful growing season during the Covid-19 pandemic, Thomas Jefferson’s Spartan Garden needs some improvements. The Spartan Garden started a decade ago. The original purpose for the garden was for students to become part of a hands-on activity as they began growing tomatoes, marigolds, and built a garden (the greenhouse was built in the 70s). In addition, the Spartan Garden is Denver Public Schools’ biggest youth garden which pays students to tend.

Elizabeth Lynch, an Alternative Career Education (ACE) teacher and Advanced Via Individual Determination (AVID) teacher at Thomas Jefferson High School, is head of the garden this year and has been involved with it since its inception. Her vision for the garden this year is to dig up all of the old beds filled with wasps and replace them with raised beds to accommodate the Americans with Disabilities Act and wider walking paths. These beds will allow the garden to be wheelchair accessible. The current beds on the ground have made it difficult for students with fine motor skills (the ability to make small movements with parts of the body such as hands, wrists, fingers, feet, toes, lips, and tongue) to decipher which plants are weeds and which are plants such as corn.

According to the University of New Hampshire, “Raised beds are often more productive than beds in the ground because the soil is less compacted, has better drainage, and warms earlier in the spring, meaning that plants will start to grow earlier in the season.” Thus, if the beds were to be raised, students with disabilities have an easier time weeding, watering, and tending the garden. Additionally, the greenhouse hasn’t been used for the past few years because the roof needs to be repaired, and the temperature needs repairs to be more consistently regulated. Because of this, the greenhouse is currently being used for storage and starting seedlings in the spring.

As of now, the participants of the garden have been in the ACE class. However, next year, there will be gardening for the ACE class and a class for any student who needs a break from the classroom and is interested in working in the garden. Ideally this class would be open to any student who is interested. According to Lynch, “The new beds are coming in next year and in order to fulfill the grant, we have to grow the program.” She continues, “[Students in the new class] will build the beds, improve the sprinkler system, work the greenhouse system, or work in the food end and help figure out what food to grow and recipes to cook the food.” By working in the garden, students learn hands-on skills,  how to take direction, and job skills and expectations. The class is worth five credits and opens up to paid internships during the summer.

If students are not interested in taking the class next year, the garden will have ten available beds, so each club at TJ can have a bed to grow vegetables, plants, and flowers, or the Spartan Garden can start it and the participants in the club can sustain it. Each club may reap the proceeds by selling the vegetables they grew, and using the proceeds to go towards initiatives of their choice. All the beds will be watered, but each club will need to maintain the beds.

In terms of preparation for these changes, the Spartan Garden is currently collecting bags of leaves to help compost the dirt while combating leaves sitting in landfills. By composting leaves, the garden saves money that can be used towards other projects instead of buying new soil. “We are getting 50 beds and filling them with dirt will be an issue,” says Lynch, so students can donate bags of leaves to the school by leaving them in front of the garden greenhouse.