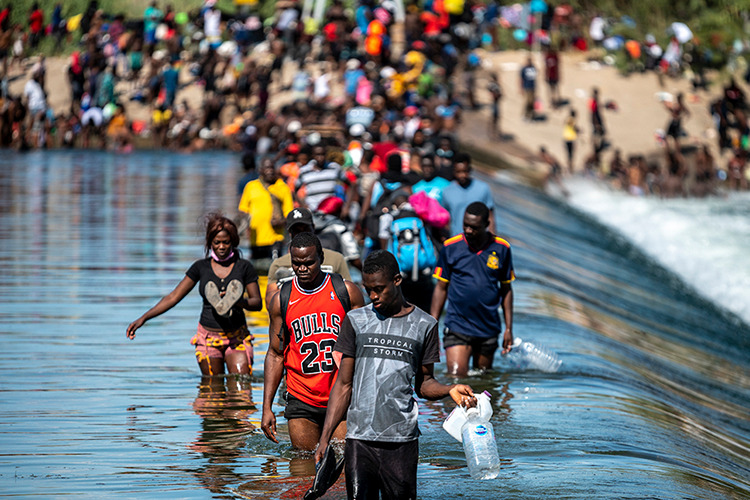 The US-Mexico border continues to be the site of access for immigration into the United States.

Since winning its independence from French colonizers in 1804, Haiti has gone through numerous economic, political, and social crises. One of the most widely known catastrophes Haiti has experienced was a 2010 magnitude seven earthquake. The natural disaster took more than 200,000 lives and caused $7.8 billion to $8.5 billion in damages. A blow like this would be catastrophic for most countries, but for a developing country like Haiti, this absolutely demolished the livelihood of the country. Now, eleven years after the earthquake, Haiti is in debt by roughly 3.94 billion U.S. dollars and around 59% of its citizens are living in poverty.

Post earthquake, many Haitians immigrated to South American countries and were able to find asylum there for the remainder of the decade. However, the economic shock caused by the COVID-19 pandemic spurred Haitian immigrants in South America to move further north. Immigration from Haiti to the United States is no small feat. Most Haitian immigrants are accessing the US-Mexico border by flying to South America, then moving north by foot or bus. This lengthy journey is dangerous, and a very small percentage of those who take it actually reach the United States. For the Haitians who remained in their native country after the 2010 earthquake, the thought of immigration has remained a promising prospect. In July, Haiti’s president Jovenel Moïse, was assassinated by foreign mercenaries, allowing gang violence to increase. In addition to political instability, the ruined economy and effects of climate change are adding even more weight to the problems Haitian people are facing.

The Biden Administration’s Immigration Policy, as seen on their website, is arguably pro-immigration, however, their actions may prove otherwise. The Biden Administration has been using a Trump-era immigration policy in court to expel immigrants seeking asylum. This policy, Title 42, allows the Surgeon General to recommend the suspension of immigration from specific countries to prevent the spread of any communicable disease. This policy is a loophole the government can easily use to block immigration or expel immigrants from specific countries. In January of 2020, 80% of migrant expulsion cases were upheld in court by Title 42. The Biden Administration has reported that these expulsions are used in hopes of deterring future migrants from Haiti, however, the number of immigrants at the US border has not shown much improvement. In July of 2021 alone, US border patrol reported that they stopped 212,672 migrants at the border, which was a 21-year high. Immigration into the US is being handled is reflected in Biden’s approval rating, which, according to FiveThirtyEight, falls at about 42%.

Starting in October, images began circulating of border patrol agents on horseback attempting to round up migrants, using any force they deemed necessary. Many of the immigrants coming from Haiti are black and receiving noticeably harsher treatment than non-black immigrants. In addition to the heinous treatment at the border, the Biden Administration sent thousands of Haitian immigrants back to Haiti. Haitian immigrants are seeking asylum for valid reasons, and being sent back to Haiti puts them at risk.