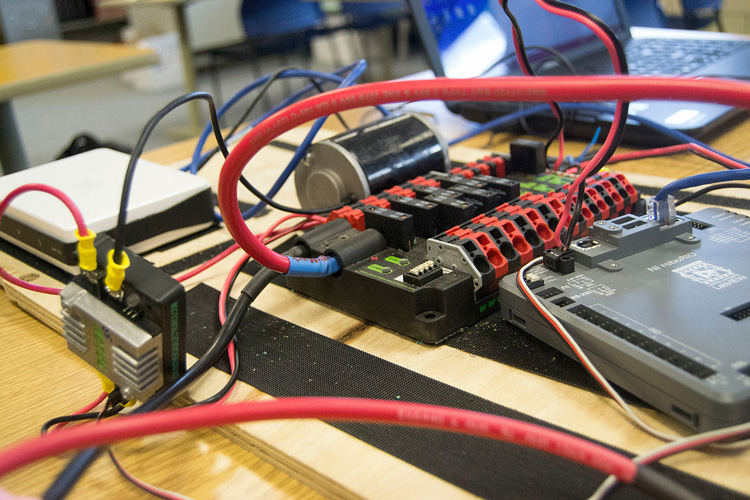 From March 24th until March 26th, TJ’s robotics team, Sparta Robotica, will compete in a regional competition held at the University of Denver. The team, comprised mostly of students from pathways robotics classes along with a handful of other individuals in the robotics program, has been hard at work since the beginning of semester building, programming, and prototyping the robot.

FIRST Stronghold is a medieval themed challenge featuring castles, boulders, and obstacles to breach. In the two-minute time period, teams must control the robot to fire foam dodgeballs into castle goals, claim their opponent’s tower, and overcome various obstacles. These hindrances include a bar to drive under, stacked blocks to create rough terrain, and various other wooden challenges. Teams also have to collaborate with other teams to form alliances that score points for each other, assist with difficult tasks, and solve problems within the game. “This year’s game is a lot more challenging because there’s more of a team element involved,” explained coach Matt Santambrogio. “This year, you definitely have to work with your alliance partners, or you’re not going to advance.”

The game was revealed to teams around the world on January 9th, and students had six weeks to construct a robot. After the six-week period was “Bag and Tag Day,” where the robots had to be covered in plastic so that they cannot be altered. TJ’s team opted to construct a second identical robot, which allows more time for practice before the competition. Students have been hard at work over the past several months, and have dedicated many of their Wednesdays and Saturdays to prepare for the competition. “These extra build days gave us a lot of time to come together as a team, which allowed for more ideas to spread and for everyone to build the robot,” explained sophomore Rachel Golledge, a first-year member of the team. “They also gave us more time to design, build, and practice.”

In previous years, no more than 12 students were on the team at once, but this year marked immense growth for the robotics program. Around 30 students are now on the team, causing Sparta Robotica to be split up into two different groups; students from period 1 and period 8 work on various tasks that ultimately come together to form the robot. Santambrogio stated that with the increase in students, leadership and productivity have increased, allowing the students to do more than just build a robot. Students have been able to work on designs for the pit area at competition, create a website and a safety animation video, and pursue various sponsorship opportunities from local businesses.

This year, several different companies were able to sponsor the team by providing food, money, and mentorship throughout the season. This support allowed the team to purchase more parts for the robot, provide lunches for students, and allow for other desires such as t-shirts. In addition, the competition season would not be able to function without the tireless efforts of dedicated mentors and coaches. These instructors, parents, and business professionals assist with both building and technical aspects of the robot in order to assure that students are successful. “Seeing difficult issues resolved and the ‘aha’ moment in any person is greatly rewarding in itself,” explained mentor Peter Golledge, whose children are current and former members of the team. “I also get satisfaction that positively influencing future professionals will ensure some great results both for the industry and the individuals themselves.  FIRST and similar programs allow students to experience working on real problems and get a chance to get mentoring on all of the key skills: design, prototyping, fabrication, project management and troubleshooting.” The mentors spend many build sessions consulting students on how to fix various problems that might occur, and embolden team members to achieve greatness. “The mentors inspire us to succeed and they push us to do better things,” explained sophomore Chloe Richter, one of this year’s new additions to the team. “They always support us.”

The competition will take place over a span of three days, the first acting as a practice day for teams. Teams from all over the region will be in attendance, including students from Colorado, Wyoming, New Mexico, Arizona, Utah, Kansas, Florida, South Dakota, and California. FIRST competitions are often vibrant events, complete with costumes, mascots, and noisemakers to cheer on determined teams. “FRC competitions are very fast paced and are quite an experience, ” said junior Colton Hook, the team’s Lead Construction and Design Manager. “I would really like to get a top ten finish and winning would be even better. Last year we finished roughly in the middle, and I think we have the ability to do much better this year. Either way, it’s a great experience and I’m excited to compete.”

TJ’s robotics students are ready to dominate during FIRST Stronghold and place highly in the ranks. With their hard work, passion, and creativity, Sparta Robotica will take on the competition with full force. Click here for more information about the schedule for spectators, the live webcast, map, and parking for the competition.