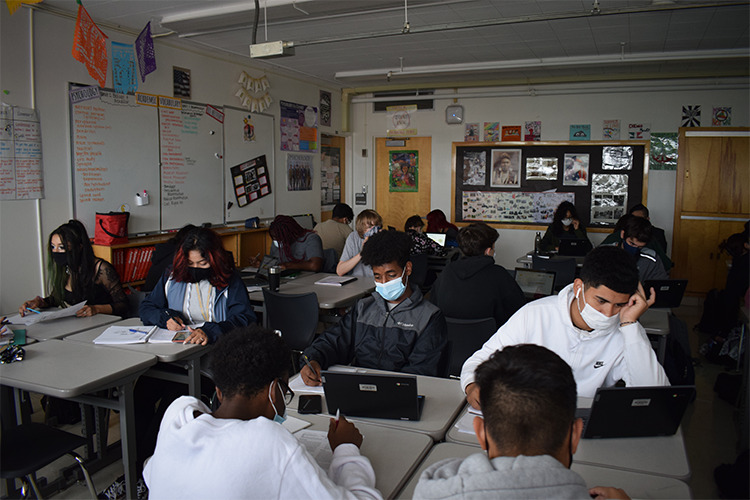 Students are finally back in person, though some are still mentally virtual. photo courtesy of Yearbook Staff

The truth behind attending online school as a freshman.

Every year of middle school is simply about getting prepared for high school. All you want to do is graduate so that you can go on to high school. When you walk out of your middle school building for the last time, you don’t think that the last time you would see people’s full faces would be then. You don’t think that you wouldn’t be able to form an opinion of your high school until your sophomore year. To simply put it, you don’t expect to start your high school life in a global pandemic that cuts you off from everyone and everything. It’s suffocating to learn how to survive instead of thrive. Thriving meant not falling back asleep in your classes and looking presentable at least once a week. Eventually, school, in general, became a chore. A chore that no one wanted to do. At least, that’s how it was for me.

In the summer before freshman year, the pandemic was something far away. As a result, I never thought that the repercussions could be so massive that I wouldn’t be able to go back to school for over a year. On March 13th, 2020, we received a two-week add on to our break due to COVID-19. Suddenly, a two-week break became three weeks, then four, and then 76 weeks. More than 500 days passed before school went back to normal— which is a relative term as there are no more smiles shared in the hallways and no emotion displayed beyond what you can see above a mask. We spent more than 500 days in isolation, and yet we still find ourselves alone in a vast sea of emotionless faces.

As we move through the hallways, some of us are alone and some of us are with friends, but all of it comes down to luck. If you were lucky, you made some friends in freshman year by reconnecting with old friends or finding new ones who got you through the year. You stared at the screens on your zoom call with a little more familiarity because you knew the face behind the icon on your computer. Thankfully, I was one of the lucky ones. Once I found that human connection, I grasped onto it and held on tight; if you weren’t lucky, you sat at your desk or on your bed and had no knowledge about the hundreds of faces that stared at their computer screens just as sadly as you were at yours. Hundreds of people, searching for the same human connection you were, even though no one was brave enough to just turn on their camera.

In the movies, high school seems scary. In the movies, if you answered too many questions you were a nerd, but if you answered too little, then you were dumb; if you didn’t talk at all, you were too shy, but if you talked too much, you were annoying. However, high school is not like how it is portrayed in the movies—not in the least. You don’t know that if you don’t experience it for yourself. No one wanted to be the one person that got a question wrong or the one person that answered too many. Not talking at all became the safer option, and after every question asked by a teacher, a nerve-wracking silence followed until someone, brave enough, decided to speak up. High school is supposed to be about finding yourself and finding the people that you fit in with, not about building up the courage to answer a question or worrying about whether or not your microphone was working that day. High school is supposed to be fun, but for that year it absolutely was not.

Online school imposed a challenge for many people and not only for the sophomores that first started their high school career online. As a result, cheating was inevitable for most, and those who didn’t cheat found themselves yearning to. The pandemic introduced two illnesses into our society: COVID-19 and an epidemic of laziness. Though I was never infected with COVID-19, laziness started to flow through my veins as I started to let go of my priorities, which I know others did as well. We lost an entire year of learning; an entire year of possible friendships and possible experiences. We had gotten used to hiding from the world during the pandemic, and now we sit in our classrooms, a little less timid, but still hiding behind a mask. But at least everything is back to normal… right?