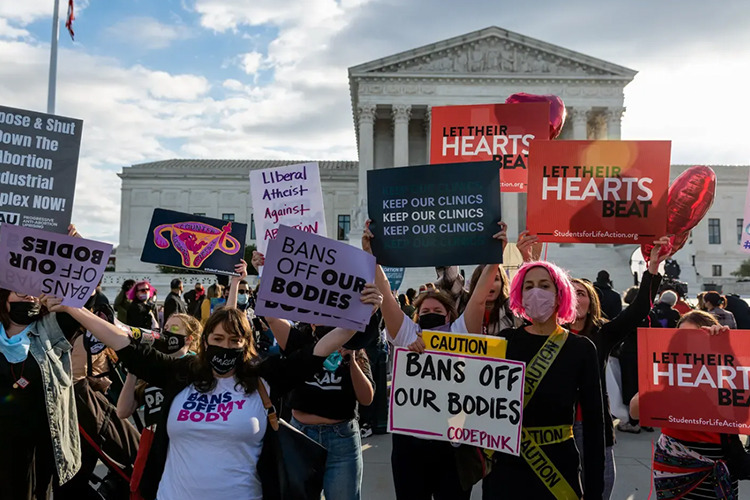 Sides of both arguments rally in protest in front of the Supreme Court in hopes that their voices are heard. photo by Eric Lee

The Supreme Court heard two lawsuits that are detrimental to the outcome of passing the Senate 8 Bill.

Another piece of history was made on Monday, November 1st, when the Supreme Court Justices decided to allow an oral hearing on Senate 8 Bill, also known as Texas Abortion Ban Law. The law which prohibits women from receiving an abortion after six weeks of pregnancy which is hindering to situations; people from all across the board gathered in protest outside the courthouse as the hearing went on for a few hours. The nine justices heard two lawsuits in the span of three hours, one stemming from the Department of Justice and the other by abortion providers residing in Texas.

The lawsuits had not pertained to abortion rights or the constitutionality per se, but more so the legality and technicalities of the law itself. Supreme Court Justice Brett Kavanaugh stated, “There’s a loophole that’s been exploited here or used here,” adding, “it could be free speech rights. It could be a free exercise of religious rights. It could be Second Amendment rights, if this position is accepted here.” Some of the arguments from other judes had been that if this right had been up for threat, who is to say that the same-sex marriage, gun rights, or birth control would not be at threat to be challenged. According to Cable News Network (CNN), Justice Sonia Sotomayor expressed, “so this is not limited to abortion. That’s the point that’s been raised. It’s limited to any law that a state thinks it’s dissatisfied with.” The concerns raised had been that Texas could potentially be creating a blueprint for states to jeopardize other constitutionally protected rights.

During the discussion, Texas state officials claimed that it could not be possible to sue the state of Texas because in court they would not be implementing the law. It would be up to private citizens to turn in anyone assisting in the process of the abortion. When it comes to the Department of Justice’s lawsuit, Justice Elena Kagen believed that the claim had just been “broad” and there was nothing that could be done in any cases in United States vs. Texas could happen to the extent the department wants it to go.

After the proceeding came to an end, many questions arose and were still unanswered, the main one being as to how the court will rule in the official hearing. Plenty of lawmakers and local Texas politicians were taking the time to decipher the words and points made by the justices and how each of the nine would rule. It was highly unlikely that a final decision would be made the same day as the hearing, but who was to say what will occur. Back in September when the law first came into effect, three liberal justices and conservative Chief Justice John Roberts all voted in favor to temporarily block the ban. If justices Brett Kavanaugh and Amy Cohen Barret were to side with them, that would enforce enough votes to temporarily block the law’s enforcement.

The future holds so many uncertainties regarding any further action with the law, especially as other states, such as Mississippi, are moving forward with their own bans on abortions on more extreme terms. Everybody across the nation watches as the next steps of actions are taken carefully.