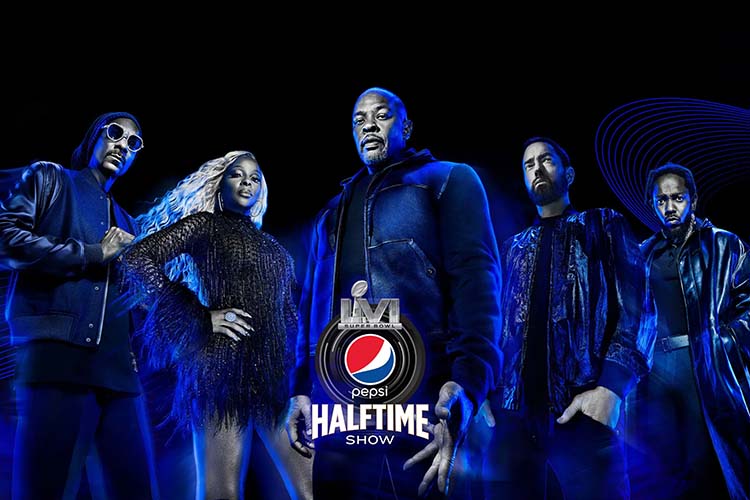 After a very intense 56th Annual Super Bowl, people are not just talking about the Rams win, but the powerful halftime show performance done by five brilliant artists. Award winning artists Dr. Dre, Kendrick Lamar, Eminem, Snoop Dogg and Mary J. Blige took the stage at the 2022 halftime show and blew the minds of countless Americans across the country. Each artist brought their own spark to an already electric show. While there were many young people tuning in for the halftime show, it was clear by the fact that the youngest artist was Kendrick Lamar (age 34), that the halftime show was a throwback.

The artists had performed an arrangement of their songs, collaborating at the next level. They would take turns with the spotlight. Each artist mixed at least one of their songs into the auditory explosion at the superbowl. Dr. Dre presented “The Next Episode” (feat. Snoop Dogg), “California Love (remix)” with 2Pac, Dr.Dre, and Roger Troutman, and last but most certainly not least, a fan favorite, “Still D.R.E” (feat. Snoop Dogg). Eminem showcased “Lose Yourself” (2002). Miss Mary J. Blige not only had an outfit everyone was talking about, but also made a huge splash with her songs “Family Affair” (2001) and “No More Drama” (2001). Lastly, Kendrick Lamar elevated the stage with his songs “Alright” (2015) and “M.A.A.D City” (2012). There was also a small performance done by 50 Cent, as he sang his popular “In Da Club” (2003).

In addition to the great music that was played at the Super Bowl, like other performances and many songs created in the past, there were emotional and sometimes political components. In Blige’s “No More Drama,” she sings that, “When you let go of all the drama in your life, Now you’re free from all the pain, Free from all the game, Free from all the stress, So find your happiness.” She was not the only one who showed her emotion during the show. Eminiem kneeled during his time on stage, and while there has been controversy over whether or not it was a political stance or simply him composing himself, it was definitely a moving sight. Dr. Dre also sang, “still not loving police … Still taking my time to perfect the beat, And I still got love for the streets, it’s the D-R-E.” Thus, pointing more attention to the many issues involving the police still happening all across the country. Songs are all these little opportunities for songwriters and performers to share little pieces of themselves. In Lamar’s “Alright,” he raps that, “But if God got us then we gon’ be alright.” He uses his lyrics to share his faith with his audience, to be an encouraging factor, and hopefully touch lives.

Each song performed had meaning and brought everyone in the stadium to their feet with an incredible feeling of joy and entertainment. Every artist brings their experiences and their emotions into their music, it shows when they perform. It is what creates their fans and brings them success, all five artists brought that to the 56th Super Bowl halftime show.