Hit the Snooze on Start Times 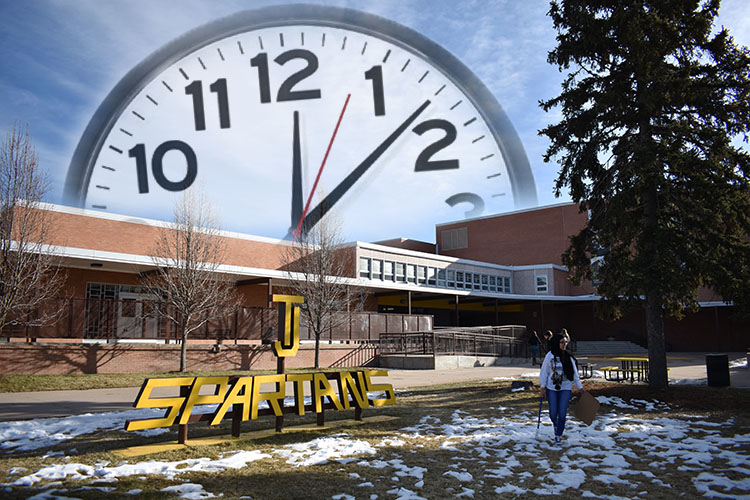 In order to promote a healthier lifestyle for students, schools should push back start times. graphic by AJ Domagala

Schools all over the country start at very early times, causing controversy between the students and the administration.

For many years, students have been fighting to be able to set their alarms a couple hours later for school. Many studies have shown that starting school at a later time will allow the student to be more alert for the rest of the day. There are many factors that go into implementing a later start time, like buses, sports, and many more.

Starting on July 1st, 2022, California middle and high school start times will all begin after 8 a.m. This decision was influenced by recommendations and studies from the nation’s top health organizations, who believe that telling students to go to sleep earlier won’t do much for their sleep schedules. “Due to shifts in their biological rhythms, adolescents become sleepy later at night during puberty and need to sleep later in the morning,” explained the American Academy of Sleep Medicine. However, a combination of poor sleep habits and early school start times means that most young people aren’t getting enough sleep.

On average, teens need around nine hours of sleep per night, and high schoolers are typically getting fewer than seven hours. With later start times, getting the optimal amount of sleep will be more achievable. There will also be multiple other benefits if there are later start times, like a decreased risk of getting into car accidents due to drowsy driving, as well as lower dependability on caffeine, and more time for teens to eat breakfast in the morning. Also, if there are later start times, there will most likely be a boost in academic performance, since students will have more sleep under their belts. Researchers have even said that delaying start times by just 30 minutes will have a positive impact on grades and performance. If students show up to school later, they will get home later, leaving them less time to be alone. This would decrease the chances of teens being involved in unhealthy or even illegal activities. Ever since the new implemented start times in California, the controversy between other school districts and different states has risen. Hopefully, California’s laws will create a domino effect and other schools will soon start later as well.

Although there are many benefits to having later start times, there are also valid concerns. If there are later start times, bus schedules will be altered, and transportation between older and younger siblings may be difficult. There is also the issue of athletics and extracurricular activities, which will end later if there are later start times. With these issues though, there are things that can be done so the health of students will improve. With the bus schedules, yellow school buses won’t have much of a difference besides having their schedules altered by 30 minutes per day. If the schools change the start times throughout that whole district, there will be no conflicting time schedules. As far as sports and after school activities go, there is a higher chance of athletes having to play in the dark. With this, there are things that can be done, such as installing outdoor lights which would optimize practice time. If this does not work, practices may have to be shortened by 30 minutes or so, or there may have to be less of a gap between when school ends and the sport starts.

The most important thing in education is having a healthy and motivated student. With the lack of sleep students receive, academic and athletic performance have declined. With later start times, young adults have more time to sleep in, so they can get the optimal amount of hours in, while also being more alert during the day. Though there are reasons the delays have not yet been put in place, the health of students should be the number one concern, regardless of potential obstacles.