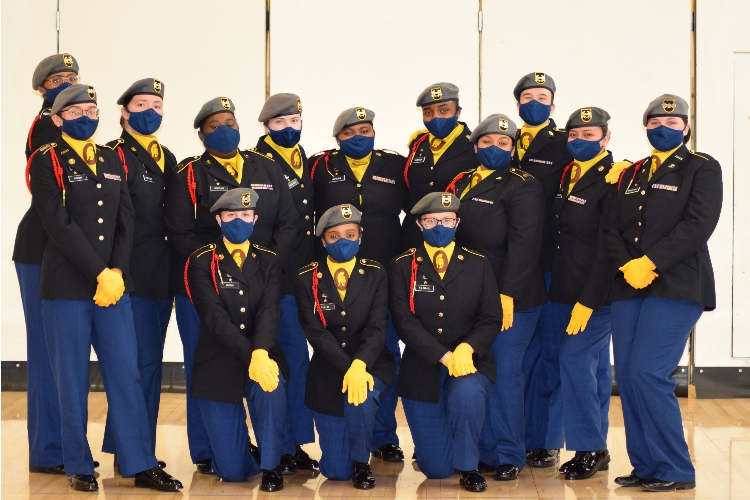 Thomas Jefferson’s JROTC as a whole has changed from its normal format this year. The Honor Platoon step team has faced a new competition obstacle like no other. Unlike most years, where Honor Platoon travels out of state to compete, this school year the competition was held virtually. Not only was the competition changed to a more virtual setting, but for the remainder of the school year Thomas Jefferson has been primarily following a hybrid learning model. Where does that leave JROTC and its teams? Well, it means that the teams have to compete virtually and that cadets’ normal responsibilities have changed.

Instead of wearing the usual uniforms on Wednesdays, cadets are now either sitting at home in front of a laptop screen or are in person wearing civilian clothes. Class parties are no longer a thing due to COVID-19 restrictions on food in the buildings and close-proximity groups with more than ten people present. It has been a stressful year for the cadets in the program and it has certainly been a downer for freshmen who chose to take this class in hopes of doing the fun activities previous students have done.

Like most classes at Thomas Jefferson, JROTC classes have been virtual with some exceptions of being hybrid and going in person to the building. While many students chose to stay home in the comfort of their beds, those who did opt for in-person have had their fair share of experiences with the JROTC setting. Senior Aliana Martinez, one of the captains for the Honor Platoon step team, is an in-person student during the hybrid school year. She explained, “I like the hybrid learning situation we have at school, but when it comes to JROTC, I really wish that we were able to do more hands-on like how we used to do before the pandemic started. Some examples of what hands on would be are falling in formation with our different squads and platoon leaders. Overall, having everyone in class would be amazing because it really sucks that I only get to see a couple of my staff members or a couple of my friends at school every day.”

While the pandemic is very unfortunate for the seniors who were expecting to have a good final year, there was some hope for the juniors that still have a chance to have a successful senior year. Junior Zoey Portillo is also an in-person student and a member of the Honor Platoon step team. This is her third year being a part of the team. “My opinion on the hybrid setting is I don’t like how hybrid made us just online but sitting in a desk. I think it’s ridiculous that we can’t do things we used to being in the school environment.”

The step team for JROTC had their own adjustments when it came to competing. Though the team was set to travel to Daytona, Florida, near the end of April, it was announced a week in advance that DPS schools could not travel out of state. That did not stop the team from competing virtually. By competing virtually, the team had to record themselves doing the events, which consist of Regulation, Expedition, and Color Guard. Normally, there would be inspection, but seeing as it was optional for this year, that event was not necessary. Recording the event was still a bit odd for the team members; most were not as motivated as they would be if the competition was held in Florida. Portillo is one of those members that did not feel as motivated as she normally would have been.

“It is kind of upsetting that we had to compete virtually considering most of the girls were vaccinated for this trip in the first place. I would have loved to travel with the team this year to really show the new girls on the team what it is like to compete at a big competition.”

Martinez added, “It was a bummer having to compete virtually, but I think it was better than nothing. In my opinion, I think it was a great way for the girls to experience what a competition would be like, rather than not competing at all. Seeing that this was my last competition, I did not get to actually compete with other schools like I normally used to. But I can’t do much about it now.”

The season was unfortunately cut short by competing virtually this year; in previous years, the season would have originally started way back in November. The fact that the first and final competition for drill season was in April when it should have been in May is a bummer. More or less, even though it was a shortened drill season, there was some good that came out of it. Upon getting the results, Thomas Jefferson’s Honor Platoon step team took 7th overall in the nation. This placement was due to them taking first in Exhibition, fifth in Color Guard, and sixth in Regulation. This was for one of the competitions that was originally going to be held in Richmond, Virginia, but was moved to Daytona, Florida instead, where both competitions were held. For the State Nationals Competition, where the team took seventh overall, the scores were ninth in Exhibition, sixth in Color Guard and tenth in Regulation. The scores were not the lowest, but that still added up to the impressive final placement.

Martinez concluded, “I would say the best thing about this year was being with everyone. Even through the pandemic, we couldn’t be together very often. I did enjoy having practices and being able to run the routine over and over again while watching the new girls. Learning Color Guard was also really fun. I really hope for the best for the next HP season. I feel like things will be a lot easier next year, but I really did enjoy being together and savoring the moment.”

With this being Martinez’s last year as not only an HP member but also her last year as one of the captains, she can say that the end to the season was rather bittersweet. As for Portillo, she has one more year to experience the thrill of competing. Portillo concluded, “The best thing this year that has happened was meeting new people and seeing everyone at practice. My mental health has also improved.”

Even in the face of COVID-19, Thomas Jefferson’s JROTC and Honor Platoon step team triumphed through this year; even though it was a long year with so little motivation, it does feel reassuring to know that hard work and dedication can pay off a ton in the long run.