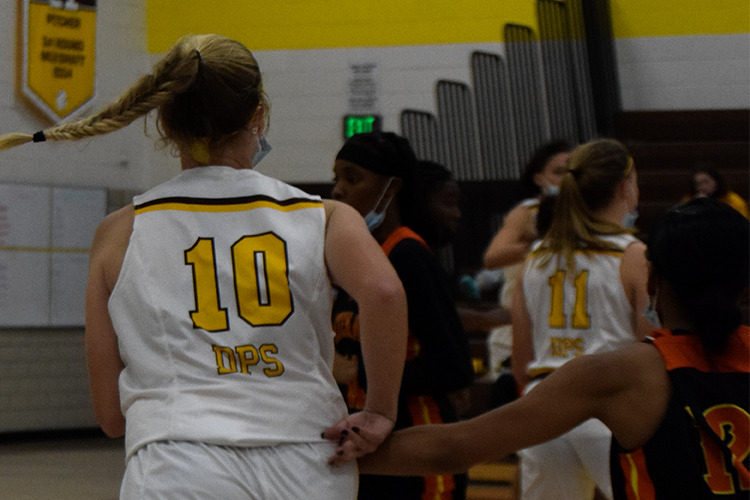 The story of the Thomas Jefferson High School girls’ basketball team will build an appreciation for all their accomplishments. photo credit TJ Yearbook

Girls’ Basketball just concluded a season in which they made it to the second round of playoffs and ended with a record of 12-13.

The 2022 Thomas Jefferson High School Girls’ Basketball team concluded a season full of memories and great accomplishments. What are the words to describe a great team? Maybe cohesive? Perhaps, selfless? Well, this year’s Girls’ Basketball team captured both of these words in their winning ways and exciting games. Additionally, this year’s team built a bond that set up future seasons for great success. To name a few moments of the season’s brilliance, TJ’s Brooke Murrell broke the 1000 point mark as a junior captain, the team found a way to beat Littleton High School for the first time in years, and they made it to the second round of playoffs.

The captains of this year’s team tell the story of an unforgettable season. Lauren Simasko, a senior at TJ and captain of the team, recalled the highlights of the season. “I think there are a few things, I think Brook hitting the 1000 points was pretty awesome, our first playoff game was a really proud moment, and as a team we just got really close off the court.” Similarly, senior captain, Grace Leonard, spoke to the tight-knit community. “I feel that our team bond has really grown from the past couple of years.” Leonard also expanded on this idea of closeness amongst the Spartan teammates when including a key detail of the season: a team dinner at her house. The girls gathered at the Leonard residence and ate pasta before their senior night the next day. If there is any indication that the bonds within the team were anything less than extraordinary, the first round playoff win tells the tale of a team successful in a quest to build a strong team stemming years ago.

Made up of an exceptional coaching staff (coaches Damion Allen, Armani Robbins, Autumn Crews, Caitlin Zeiler, Justine Taylor, and Kathryn Kindle), all fostered a culture of sportsmanship across the entire girls program. Nothing is more indicative of this support than when the entire varsity team had all individual players score points. Upon the scoring of varsity players Debbie Spanoli and Loup Povolotsky which concluded the team’s perfect scoring, all of the team’s players and coaches erupted in cheer according to Leornard. Murrell added to the narrative of the season when referring back to the one of the proudest moments for the team which of course was a win against Littleton High School. “That Littleton game everyone stepped up, people were shooting with confidence, and having fun,” she said. This of course is what the game is all about and Murrell agreed. “Building a strong connection makes the game a lot more fun.” Additionally, Murrell breaking 1000 points was a monumental moment of the season for everyone and her side of the story makes her effort and accomplishment deserved in every respect. She did not believe that she had done something so extraordinary. “I was speechless because it was the playoff game and I was into the game and then people were like ‘Brooke you hit 1000!’”

The Thomas Jefferson High School Spartans are proud of the girls’ basketball team and everything that they achieved this amazing season. Their season’s story is one of immense teamwork and cohesiveness. They look forward to continuing to build upon their successes in their next season. Well done, Spartan Hoops!