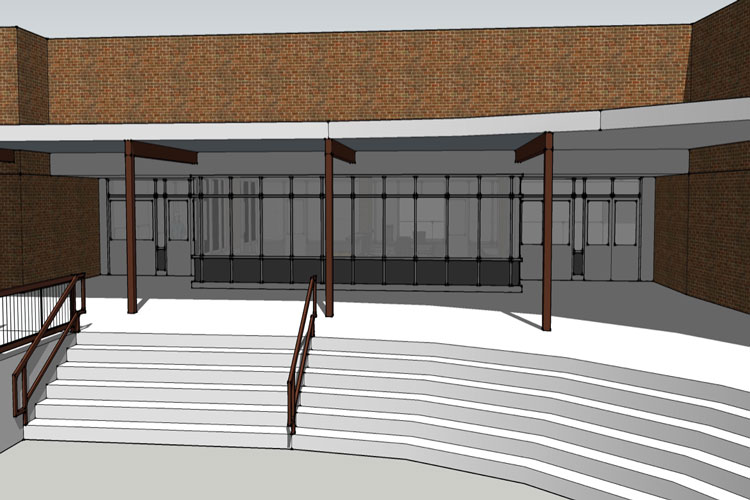 With the use of voter issued bond money, TJ will be renovated for the 2019-2020 school year. photo renderings courtesy of Mike Christoff

Thomas Jefferson High School is undergoing construction that will help modernize areas of the school.

As students walk through the halls of Thomas Jefferson High School they may notice some changes in the typical scenery. The front lobby that was once filled with photos of students, trophies, and the security desk is now an empty construction zone and covered in dust. The ceiling is now made up of metal beams and the tiles have all been stripped away. The library floors have been replaced with concrete. The dramatic changes are due to construction that will help renovate the school. Rendering of the new front lobby.

The construction is being funded by bond money that was approved by Denver voters for Denver Public Schools in 2016. The bond was originally worth $2.3 million, but through negotiations, Principal Mike Christoff was able to raise the bond to approximately $2.7 million. The bond is being used to renovate TJ and other DPS schools. “Different schools around the city were recipients of the bond money. So, some [schools] had work done in 2017, 2018, 2019, since this is a three year bond,” explained Christoff. At TJ, the money will be used to help modernize the school. Rendering of the new library. After much discussion, TJ decided to use their share of the bond money to help renovate the lobby and library, and it will also be put towards building a concession stand by the baseball field. After TJ acquired the bond money, a committee was formed last spring to decide where the money should go. The committee was comprised of ten members that included parents, administrators, students, the facility manager, DPS planners, and an architect. “We went through a series of meetings and talked about what our priorities for the school bases on things we heard from students, teachers, parents, and community members. And then [we] created a wishlist of things, then we started chipping away at ideas until we settled on the three main projects that we had,” described Christoff. There were also a few smaller projects that TJ wanted to complete, such as a new marquee for the front of the school, that could not be funded by the bond money. However, TJ still plans to build the new sign without the coverage from the bond. “Through savings that we’ve had over the years as a school, I was able to set aside enough money to add a new marquee that will be put in next year,” mentioned Christoff.

Although it may be hard to imagine the new layout, the construction will allow TJ to have a new look for the new school year. In order to help the TJ community envision these new changes, a 3D model has been made to diagram the school post construction. The construction will continue for around another four months, but many students and faculty members are excited to see the new look of the school come next fall.