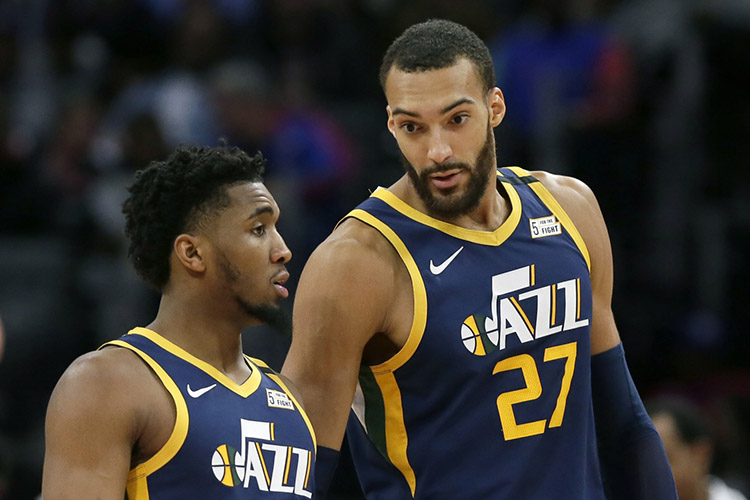 Donavan Mitchell (left) and Rudy Gobert (right) were the first two players in the NBA to test positive for the coronavirus. photo by Duane Burleson

After the season was suspended indefinitely, the NBA and its players look to support COVID-19 relief efforts and those affected by the virus.

On Wednesday March 11, 2020, the stage was set for the Oklahoma City Thunder to take on the Utah Jazz in a regular season game just as planned.  Minutes before tip off the game was suddenly cancelled, and it was soon to be discovered that Jazz Center, Rudy Gobert, had the coronavirus.  The following day the NBA suspended their season indefinitely and Americans were shocked.  Prior to this news many Americans looked at COVID-19 as a serious issue around the world, but it didn’t necessarily pose any real threat to their own safety or way of living.  With a colossal industry like the NBA shutting down their operations, it showed that this virus was in fact a problem that was going to affect our lives in one way or another.  In the days following, the NBA started a domino effect and other organizations subsequently shut down, including the NCAA and MLS, and just about every sports league in the world canceled their seasons indefinitely.  It was clear that the coronavirus just changed the lives of millions.

Despite their seasons being put on hold, many NBA stars began to make a difference off the court.  Many arena workers were without a job because of the virus and several players stepped in to help.  Stars such as Kevin Love, Zion Williamson, and Giannis Antetokounmpo were a few of the many to donate thousands of dollars to the workers after the unexpected hiatus.  Antetokounmpo, a forward for the Milwaukee Bucks and reigning NBA MVP, explained the reasoning behind his donation on social media by saying “It’s bigger than basketball.”

Another philanthropic effort that was made by the NBA and their members was a NBA2k players only tournament.  The winner of the event was to donate $100,000 to their charity of choice to support ongoing coronavirus relief efforts.  The tournament featured players including Kevin Durant, Donavan Mitchell, and Trae Young.  In the end, Phoenix Suns guard Devin Booker defeated his teammate Deandre Ayton, a center for the Suns, by a score of 74-62.  Booker donated the $100,000 to Direct Relief and Arizona Food Bank.  Not only did this event provide funding to support relief efforts of COVID-19, but it also allowed basketball fans across the nation to connect with their favorite players.  These participating professional athletes showed fans and all citizens struggling with the effects of COVID-19 that they aren’t alone and that our country and world will get through these dangerous times together.

After over two months since the season had been suspended, players are eager to get back on the court and are hopeful the season will return.  Organizations such as the English Premier League and the UFC have reopened without fans in attendance for games.  The NBA just opened practice facilities for voluntary workouts.  Superstar Lebron James input his ideas on the NBA continuing their season: “As soon as possible, we’d love to get back out there, we’d love to bring the game of basketball back to our fans.”  NBA Commissioner Adam Silver says that the league will reach a decision on the future of the season by June 5th.  Until then, hope on the season’s return will only rise as players are antsy to give their fans a reason to cheer and signal some return to normalcy.