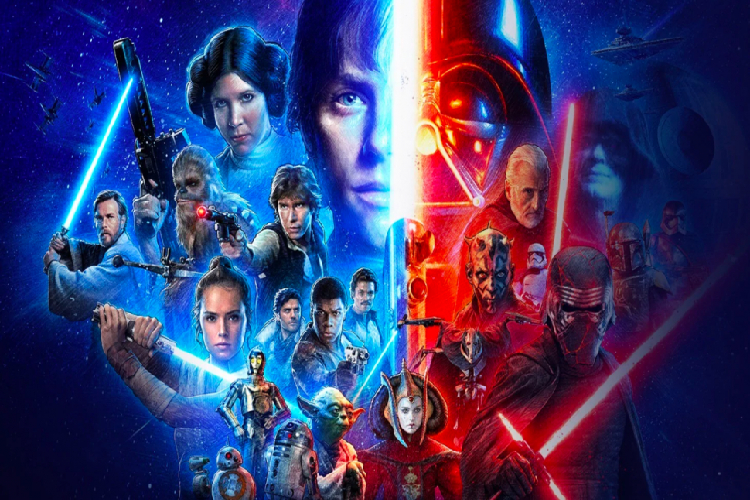 Star Wars movie collage depicting the “light” and the “dark” side. photo courtesy of etonline.com

With the announcement of exciting upcoming Star Wars projects, Disney hints to some reunions and new eras.

I had never screamed louder than R2-D2 did when I heard the announcement that Disney was going to release a gracious amount of new films and shows throughout 2021 and up to 2023. From bringing back the Scottish-American actor Ewan McGregor, who plays Obi-Wan Kenobi, to giving the beloved scoundrel Lando Calrissien his own short series, Disney has promised a whole host of exciting new projects. Star Wars fans received the glorious news on December 10th, 2020, at The Walt Disney Company’s Investor Day event. There were a total of 10 official projects set to be released with one unofficial project that is set to be directed by New Zealand director Taika Watiti.

Personally, I think that I am most excited about Lando, which will be a short series that will premier on the streaming service Disney Plus. My hopes for the show is that they get Donald Glover to fulfill the role of Lando Calrissien as well as he did in Solo: A Star Wars Story. While I will always think Billy Dee Williams will be the best Lando Calrissen in the galaxy that is far, far away, I think Doland Glover will successfully play an incredible Lando. However, it seems a fan favorite has surely been the upcoming series Obi-Wan Kenobi, which was officially announced during Disney’s annual D23 Expo in 2019. Fans are eagerly waiting for the return of their favorite jedi master Obi-Wan Kenobi, who will be played by Ewan McGregor, and the controversial role of Anakin Skywalker will be played by Hayden Christensen. We may possibly see a comeback of Liam Neeson as jedi master Qui-Gon Jinn. With the choice of bringing back Hayden Christensen as Anakin Skywalker, Disney has truly awakened the force. Bella Gassner, currently attending CU Denver, believes that Christiensen would not be a complete loss if he did not come back as Skywalker. “It was twenty-two years ago and maybe he’s improved, but Hayden Christiensen was not the best actor in the prequels so I would not complain if they recast.” I wholeheartedly agree with this viewpoint. I did not believe that he portrayed Anakin Skywalker the way he was supposed to be played. Anakin Skywalker was an incredible Jedi that turned to the dark side but was still able to turn back to the light side. In Return of the Jedi, which was episode six, we saw that Anakin was still able to come back to his light side finally and be able to die in peace knowing that he redeemed himself. Many others including myself and Bella believe that a better job could have been done for such a crucial character knowing that Anakin turns into Darth Vader (sorry if that was a spoiler alert to some, but the movies have been out for over 35 years by now). However, some people disagree with the idea that Christensen could have done better. Layla Leatherman, who has been a Star Wars fan since her preteens, believes that Christensen deserved more leniency considering he had been bullied by many for his performance. While her favorite movie is Attack of the Clones, she still defends the movie, stating “Especially the Chirstiensen era trilogy did not do so well.” She said this in regards to how happy she was to see the Star Wars saga become more popular with the release of The Mandalorian on Disney Plus. Leatherman is most looking forward to The Bad Batch, which follows a set of clones that find their way through the troubles of the galaxy following the aftermath of the Clone Wars.

Although the prequels were not my favorite movies out of the total nine episodes, I am interested in seeing how The Bad Batch and Obi-Wan Kenobi turn out. I will agree with Gassner when it comes to seeing a live action project dedicated to Ahsoka Tano, who made her grand debut in The Clone Wars. “I’m definitely most excited about Ahsoka. I used to watch The Clone Wars a ton as a kid and she was easily my favorite character,” exclaimed Gassner. Personally, I believe she is a highly underrated character, and to see a female figure in Star Wars get something that is just about them is very compelling. I cannot wait to see what Disney has in store for this powerful Jedi. It would have also been very interesting to see more of the beloved Princess Leia; I do not think that will happen due to the late Carrie Fisher, who will forever be in my heart. Similarly though, as much as I would love to see more action from The Mandalorian, I do not think we will see the beloved Grogu for a while or ever, which does break my heart to say because right next to Han Solo he is my favorite character.

Speaking of Han Solo, I was intrigued to see Donald Glover aka Childish Gambino portray a younger and more playful Lando Calrissian. I think he did an outstanding performance and quite honestly he was the saving grace of that movie. With Glover’s extensive acting background, I think if Disney were smart and picked Glover to continue to portray Lando in the series, it would be a phenomenal and witty show that would be streaming on Disney Plus exclusively. It would be very interesting to see how Lando created the city in the clouds that we see in The Empire Strikes Back, and I think it would just be fun to see how Lando became the person he is and was portrayed by many as sort of a bachelor. Plus, we would also be able to see the incredible and iconic Millennium Falcon.

I could not write a Star Wars article without getting some sort of input from the man who introduced me to the incredible galaxy that is far far away. Alex Medina, my father, grew up to idolize Darth Vader when he saw A New Hope in June of 1977 in a movie theatre in Albuquerque, New Mexico. He went on to see the film 26 more times, seeing the movie a total of 27 times. Yes you read that correctly. I mean who would not want to see the one and only Lord Darth Vader on a 30 foot screen 27 times. When asked what he was most interested to see out of all the new proposals, he replied, “Probably looking at it, I would have to say the Obi-Wan Kenobi project because hopefully they talk about what happens from the time that he went to Tatooine with Luke until obviously when the droids [C3PO and R2D2] landed and everything like that because those are the times we are missing. The nineteen or twenty years that we don’t see.” Medina expressed how he wishes to see the series shot in a smooth past and present telling of the missing time of Obi-Wan. He explained how he had been thoroughly impressed with the casting of Ewan McGregor as Obi-Wan Kenobi and was able to simply play a younger version of Sir Alec Guinness, who originally played Obi-Wan Kenobi in episodes four, five and six. He wanted to end off with a very important message to all new Star Wars fans, “Greedo didn’t shoot first.” No matter how 2021 will turn out to be, Star Wars fans gained a big win with all the new content ahead.