Kicking into Gear with Girls’ Soccer 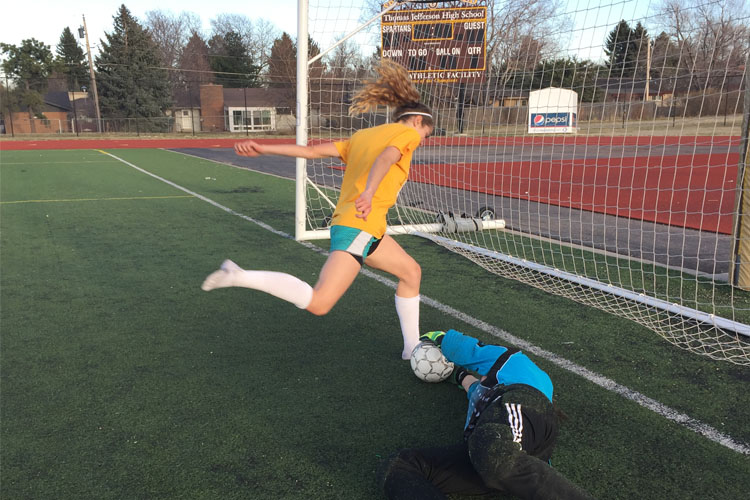 With a new coaching staff and a larger group of girls, TJ’s Girls’ Soccer is ready to take on the new season.

As TJ rolls into the spring season, many students are starting to look forward to spring break. However, for girls’ soccer, the hard work is just beginning. With two unfortunate losses against Littleton and Hinkley High Schools, and many more challenging teams to face, the Lady Spartans are ready to jump into the season with their best foot forward.

The season officially began on the week of Monday, February 29th; however, for several of the girls, preseason workouts began early in the year, before winter break. “It was really scattered and a little difficult, because we didn’t really have a coach at the time,” explained senior and captain Kaejah Simmons. “We still tried to get organized and prepare as much as we could.”

One of the most significant challenges that the team faced was relevant even before the season began; although former head coach Chris McCallum made a strong impact on the team in the 2014-15 season, he was forced to bid the team farewell due to circumstances at his job outside of TJ. Thus, the biggest concern before the start of the season was finding a new head coach for the varsity team. After a long and arduous process of interviews for prospective coaches, several of whom could be found at TJ, administration decided that Spanish teacher and boys’ soccer assistant coach Marcelino Yantas would be the best fit for the team, able to offer discipline, motivation, and perhaps most importantly, fun to a group of dedicated girls. Although Yantas previously took a leave of absence from coaching the girls, with his prior experience and his own love for the sport, he is ready to be back on the field with the Lady Spartans. “I’m excited because I’ve found a lot of good chemistry, good attitude,” Yantas explained, “and I’m ready to do big things. I want to take the team to playoffs, but we need to start working hard, and working on the basics and fundamentals.” More than anything, however, Yantas is eager to represent TJ through the players. “Everybody needs to understand that we play for TJ,” he described. “We don’t play for coach Sara, for the parents. We play for TJ.”

In addition to Yantas rejoining the team, the girls were delighted to find a familiar face regrouping the team for preseason workouts. Sara Andolsek, CCT Protech and former head coach of the girls’ team, has returned as assistant coach of the varsity team. “I’m really excited to be back,” Andolsek described. “I’ve really missed coaching and being outside, and just getting to know all of the girls so well.” With her blooming flowers and wedding business, she will not be able to fully devote herself as head coach, so “being able to be an assistant is the perfect role,” Andolsek added. She is eager to put her coaching experience to good use in assisting Yantas, already with good plans in mind. “Now that I am an assistant, I kind of follow the rule of whatever Yantas says,” Andolsek explained. “But I think the cool thing is, Yantas is really good at studying other teams, and figuring out the ways of beating them, so I think that it’s gonna be a lot of fun to go that route and actually see a different way of beating a team.”

Along with Andolsek and Yantas, John Thompson will return as the head coach of the JV team, while history teacher and head coach of the boys’ soccer team Jon Poole will work alongside Andolsek as an assistant coach. Additionally, the girls have received extra assistance in the form of security guard Chris Greer, utilizing his experience as a professional referee of the sport outside of TJ, along with his personal experience playing. “I’ve been involved with the sport for greater than 30 years,” Greer mentioned, “so it would be a waste of experience to not help out. I’ve been refereeing professionally for ten years.” Although Greer is not an official coach, he is eager to help the girls in any way that they need, and excited to see how far they grow throughout the season. “I want to help the team achieve their goals,” Greer explained. “To help them however I can, whether it be with instruction or support. It’s quite easy to say, ‘I want to go to state, I want to go to playoffs, I want all of these things,’ but you can’t get to these goals if you don’t take it step by step.” Greer stressed that he is working toward assisting these girls with the smaller aspects of the sport, in order to get to the larger goals.

After tryouts, the varsity team prepared for its scrimmage against Elizabeth on Tuesday, March 8th. As the scrimmage occurred only four days after the team was formed, a shaky start was to be expected; however, by the end of the game, the girls were playing fluidly and with confidence. Unfortunately, the Lady Spartans could not pull off the win, losing 1-0 by a penalty kick. Fortunately, the scrimmage did not count toward the team’s record, and also proved to be a valuable experience. “It was nice because we got to play as a team for the first time, without having the game really count,” Simmons explained. “We were exposed to what we need to improve on, and what we weren’t doing well, so that we had a chance to work on that stuff before we started the big games.”

On Thursday, March 10th, the team had their first game against the Littleton Lions on their home turf. Despite the hard work that they put into the game, the girls could not pull off the win, ultimately losing 6-0. “It was definitely challenging because Littleton is already such a good team, and it was only our first real game,” explained Simmons, adding, “But I think we did really well at first. We slipped up a little in the second half, and we obviously have a lot to work on, but for that first half of the game, it was exciting to watch us all come together.” Indeed, only two of the six goals were scored during the first half, while the remaining four occurred toward the end of the second half.

On Monday, March 14th, the girls played their second game against the Hinkley Thunderbirds at TJ, also offering valuable lessons to the hardworking team. Although the girls could not manage the win, the loss provided new goals and aspects on which the team can focus. “It’s never fun losing a home game,” explained Simmons, “but it happened, and now we just have to work on our mistakes, and come out even stronger next time. The most we can do is keep our heads up, and look forward.”

Overall, the Lady Spartans’ first official games have proved to be a learning experience for the team. “I would say that we need to work on completing passes, having good first touches and maintaining control,” said junior Lindsay Stoetzer. “I feel like as a team, we just need to keep playing together, and it will come – we’ll get it together. I’m excited for when we do come together and we’re able to really play together as a team.” With several energetic players and a qualified coaching staff, this season is sure to be entertaining. As with any sports team, the girls clearly have performance aspects to work on, but with dedication and practice, the team is sure to transcend these losses.