Kicking off the Season on the Right Foot 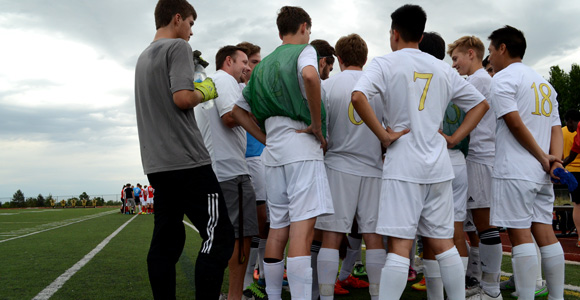 Coach Poole gets the boys fired up during a game. photo by Sasha Mesropov

Boys’ Soccer returns to the field with an impressive win.

As the school year begins and students settle into their academics, student athletes are also preparing for their fall sports. Over the past couple of weeks, several teams have had their first games, including TJ’s Varsity Boys’ Soccer team. The Spartans played against Chaparral on Thursday, September 3rd, and were victorious after a hard fight, successfully launching their season.

The boys began preparation for their season early in summer vacation, meeting up a few days out of the week to practice and scrimmage against one another. This summer practice was optional, but it provided a good opportunity to stay in shape and prepare for the upcoming season, which is especially important to this year’s seniors on the team. Thus, with the dedication and hard work of the players, it is unsurprising that they were able to win their first game.

Even before the game started, the Spartans were feeling positive. During warm-ups, the atmosphere was energetic – the ball moved from player to player smoothly and accurately, and the communication between teammates was terrific. The coaches, players, and fans alike could feel a win coming along.

From the beginning of the game, the ball moved quickly onto the opposing team’s side, and the Spartans moved swiftly around them towards the goal. For the majority of the game, the ball was kept on Chaparral’s side of the field, although penetrating their defense was not an easy feat. In the rare moments that the ball moved to TJ’s side, the situation was quickly taken care of; senior Thomas Riva, who is the team’s goalkeeper, defended his territory well.

Later in the first half, the suspense finally set in as Chaparral’s offense continued to move closer to TJ’s goal, and many shoulders slumped in defeat when a penalty was announced in the goal box. Penalty kicks (PK’s) are almost always a guaranteed goal. As Riva squared up against the opposing forward, the entire field held its breath. Fortunately, Riva was not about to give up a goal that easily; once again, he saved the ball, and the Spartan players and fans erupted in joy and relief. “One of my favorite moments was when the other keeper just completely whiffed the ball to Thomas, keeper to keeper, because that almost never happens,” confirmed senior Ben Wall, who plays as center back.

As the second half came around, the Spartans continued to fight and push for a victory, as the scoreboard was still tied at 0-0. As in the first half, most of the game was spent on Chaparral’s half; it seemed that the Spartans were getting closer and closer to the goal. Finally, an opportunity arose when another penalty occurred in the goal box. Senior and center defensive midfield Adis Rogonich stepped up to the challenge.

When Rogonich shot the ball, the keeper jumped forward a bit too early, resulting in a foul and a re-kick for Rogonich. After pausing for a moment, as the players and fans alike held their breaths, Rogonich shot the ball once more. It found its target at the back of the net, and there was an audible cheer of joy. “I knew I was going to score,” Rogonich said of his critical goal. “You just feel it, you feel it in you.”

The game continued with the Spartans continuing to put pressure against Chaparral; however, at this point the game was set in TJ’s favor. When the final whistle blew, the atmosphere was at its peak in excitement and relief: the Spartans had won their first game of the season, and finishing on a strong note.

“We moved the ball pretty well, and we basically kept the ball in [Chaparral’s] half the majority of the game,” explained teacher and coach Jon Poole, explaining the strong points of the first game. Of course, with any first game, there are bound to be areas needing work. Senior Santino Salazar explained that, “We had a bad start, we were very slow on getting there. so that kind of affected us quite a bit.” However, Salazar added that, “We finished out strong, because that’s where we had the intensity.” With time and practice, the boys will be playing at the same intensity from start to finish.

Freshman starter and center midfield Jack Thibodeau agreed that there were many areas in which the Spartans excelled during their first game. “I think we played as a team and we moved the ball really well,” he said. He also expressed that he is “excited to go on and win State.” Confidence is an aspect easy to find throughout this team.

In addition to the incoming freshmen throughout both the Varsity and JV teams, another new Varsity player has distinguished himself throughout practice and the team’s first couple of games: German exchange student Paul Kuenzel, junior and starting midfield. “[The game] was really good. I was surprised that the air was so thin, because after twenty minutes, I was done,” he laughed. “But, it was a good game, the teams were well matched. [I’m] especially excited for the game against North.”

The Spartans won another game against Conifer on Saturday, the 5th, the final score reading 4-0; unfortunately, the boys were not able to pull off wins against Skyview, Kent, Elizabeth, or Lincoln, and ended up tying their game against Frederick on September 11th. They are now two wins, four losses, and one tie, hopefully with many more wins to come. For the team’s full schedule, as well as other fall sports information, students and parents can visit www.maxpreps.com. Be sure to come show support at the games, and good luck, Spartans!