Leaders of the Marine 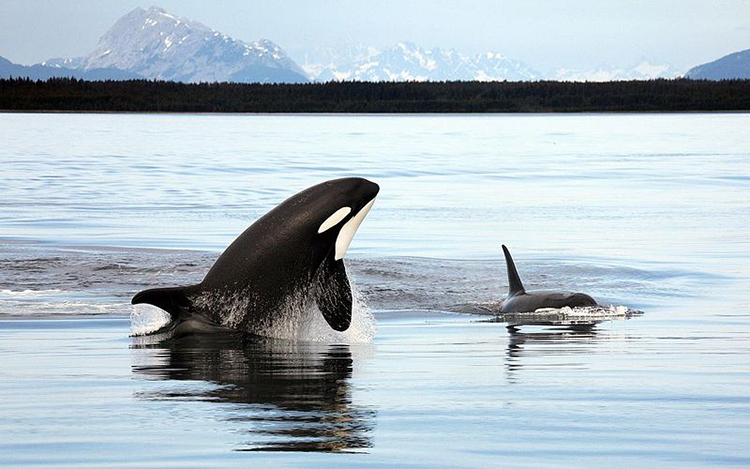 Human intervention, in unnecessary circumstances, leads to dangerous situations for the animal and their caretakers. photo courtesy of oceanconservancy.org

In the wild, killer whales have very developed family relationships, dialects, and hunting techniques but as humans continue to alter the environment, disregard for their established families may cause whales to become violent towards humans.

Killer Whales, scientifically known as Orcinus orca, are the ocean’s top predator. While they occupy the open ocean, the most abundant amount of whales live in the waters of the Pacific Northwest, along Norway’s coast of the Atlantic Ocean, and in the Southern Ocean. They are 20 feet to 23 feet long and weigh approximately 5.9 tons. Despite their large build, killer whales find families to be important to them. Unlike many hierarchies, killer whales are matriarchal meaning female whales run the pods, but not just any female, typically the oldest female runs the daily activities of the pod. Each pod has its own dialect for communicating and different hunting methods.

Currently, there are three family groups of the Southern Resident: killer whales prospectively named J, K, and L pods. Within those pods, there are sub-pods centered around older female whales. At the Vancouver Whale Watch in Canada, scientists observe the sub-pods of the L family who don’t always stick together. Joan Lopez, senior guide at Vancouver Whale Watch, describes, “the families are much more dynamic, and while males generally stay with their mom for life, there are many instances of males leaving their mothers and the remainder of their family group, sometimes as juveniles. They may reunite with their families, or be solo or connected to other families/individuals forever.” These switches in families by male whales are a contributing factor to the abundance of sub-pods within each family.

Many innovations of society have left negative impacts on the environment they live in. Many well-known causes include the planet’s temperature rising, and the polar ice caps melting. The captivity of animals, such as killer whales, has impacted the lives of the species in captivity; oftentimes neglecting their hierarchies and prey when placing them in captivity. Lopez believes that “Understanding the importance of habitat protection, prey availability, and human-caused intrusions into nature are necessary if these animals, especially top predators, are going to be able to adapt to living with our ever-expanding use of this world.”

Captivity endangers their abilities to adapt to new situations and their ability to survive.

In a study by the Center for Whale Research, the population of Southern Resident killer whales has steadily been decreasing. There are only 73 killer whales between pods L, J, and K. Between the years of 1965 to 1975, 58 whales were captured for the use of entertainment business. 13 of those whales ended up dying in the process. The rest of them were taken to various marine parks, for instance, Sealand of the Pacific would take in many of the whales captured during that span of ten years. Later, many of Sealand of the Pacific’s whales would end up in the popular marine park SeaWorld.

Captivity would soon show its effects on the killer whales. There were small acts of aggression towards the trainers but nothing could compare to the attack in the winter of 2010. In a documentary entitled, Blackfish, senior trainer, Dawn Brancheau, was killed by the largest whale in captivity, Tilikum. She reportedly slipped and was attacked by the whale. Despite the fatal attacks by whales in captivity, Lopez states, “wild killer whales have never been documented to harm a human, even when they had the opportunity and reason to do so, as they did during the time of captures.” This suggests that there is a link between violence done by whales and captivity.

These acts against killer whales and other marine animals in the marine park haven’t gone unnoticed. Immediately following the fatal whale attack, SeaWorld was investigated by the Occupational Safety and Health Administration (OSHA). After their investigation, SeaWorld was found to have violated its duties as an employer by exposing its employees to a hazardous work environment when the trainers worked with the killer whales. OSHA required SeaWorld to set limits on the interactions between the trainers and the whales. The resulting action taken by SeaWorld was requiring trainers to have a physical barrier between them and the whale, ending in-water training. After the documentary exposed the theme park for its actions against marine life, California passed a bill known as the “Blackfish Bill”. The bill prohibited killer whale captivity, breeding, and trade in the state. In an article from ww.huffpost.com, the rights group, People for the Ethical Treatment of Animals (PETA), director of animal law Jared Goodman stated, “brings to an end the days of trainers standing and riding on orcas for human amusement.”

Such establishments like SeaWorld or any circus serve no place in an ever-expanding world. As society’s knowledge about the environment and conservation continue to become more advanced, these places will soon fade into a thing of the past. For the whales that are currently in SeaWorld, no answer has been given to what will happen to them. Organizations, like The Whale Sanctuary Project, hope to create a sanctuary for captive whales to live out the rest of their lives without being in the cement tanks of a theme park. Lopez finished by stating, “Treating the ocean’s top predator as an entertainer, with food as their primary payment, is as unethical as it is cruel.”