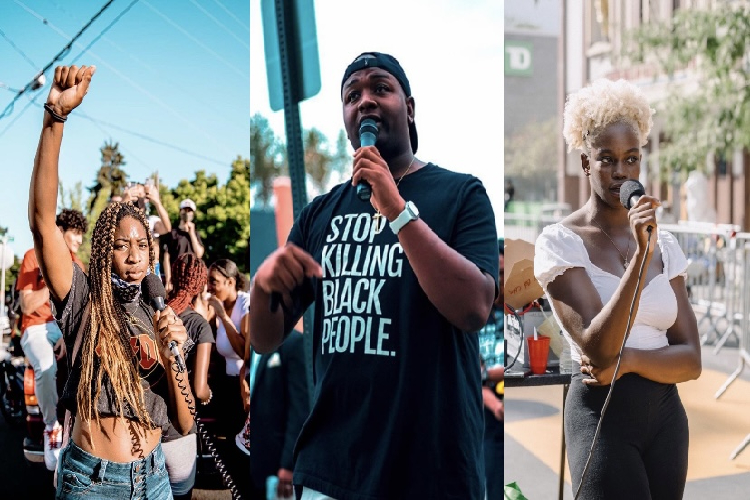 Protest leaders across the U.S stand proud and tall as they speak into the crowds. From left to right: Mary Gach in Portland, Oregon photo captured by Andrew Le, Tay Anderson in Denver, Colorado captured by Glenn Payne, Kiara Williams in Brooklyn, New York captured by Justin Aharoni

The 2020 Black Lives Matter (BLM) movement is one of the largest social movements in U.S. history. Founded in 2013 by Alicia Garza, Patrisse Cullors, and Opal Toretti, Black Lives Matter is dedicated to fighting racism and police brutality. The movement began as a social media hashtag (#Blacklivesmatter) after the acquittal of George Zimmerman, who is responsible for the death of Trayvon Martin in 2012. Since then, the movement has grown nationally and has resurfaced bigger and stronger than it has ever been in all 50 states and across the world.

In Denver, our demonstrations of the Black Lives Matter movement have been nationally recognized. On May 31, 2020, in downtown Denver, demonstrators laid face-down with their hands behind their backs chanting “I can’t breathe” for nine minutes in honor of George Floyd’s last words. Tay Anderson has been a pillar for the protests that have been taking place in Denver. As Denver’s youngest elected school board director, Anderson’s responsibility includes creating policies for the district to ensure the best educational outcome for students is being met and see to it that the district is reflective of whom they teach. Although he has only been in office for less than a year, Anderson’s accomplishments could fill a chapter book his most notable accomplishment being that he successfully removed Denver police officers from DPS buildings. Anderson has attended almost all the protests that have taken place in Denver this summer. The death of 32-year-old unarmed Philando Castile in 2016 is what ignited his passion of advocating for the end of police brutality. Since then,  he has been protesting and participating in activism for years. Anderson is no stranger to using his megaphone to raise his voice for his community. History shows that Black people are used to raising their voices for racial equality. Anderson beautifully stated, “BLM, before it was called BLM, was the 1960s civil rights movement; that was the BLM of their time.” He mentioned sharing feelings of anger, fatigue, and frustration amongst his fellow protesters after being assaulted by the Denver Police while protesting and suffering for three weeks. Anderson has proven to be very familiar with racism and police brutality. “I believe our next steps are to defund the police and put their money towards education and healthcare,” says Anderson; he continues to lead protests all over the city to this day.

Protests throughout the United States have inspired individuals to band together and form organizations. Twenty-year-old college student Kiara Williams is a co-founder of the non-profit organization Warriors in the Garden. Founded in June of 2020, Warriors in the Garden is a collective of nonviolent activists in New York City dedicated to protecting their community from all forms of systemic oppression. All five of the co-founders met protesting in NYC and have since then become “chosen family,” and Williams stated, “I can’t see myself fighting injustice with anyone other than them.” Williams is the event planner and secretary for Warriors in the Garden and is responsible for organizing events in the city, as well as making sure members are properly maintaining their roles. She has no fear of raising her fists and leading hundreds of people through the streets of New York to amplify their voices as high as the New York skyscrapers. She has been protesting for the past 100 days and has organized over 50 protests, including New York’s first-ever children’s protests that took place on June 9th and June 13th of this year. Williams is also a victim of police brutality. She shared, “I’ve been pepper-sprayed seven times in two months, I’ve witnessed one of my organizers get pummeled by six officers, and I’ve had nightsticks shoved continuously in my back.” Though she has to bear the pain due to the wrath of the police, Williams continues to rise and be an example for protest leaders across the country.

Another organization has formed as a result of the fight for racial inequality known as Fridays4Freedom. Fridays4Freedom is a community organization in Portland, Oregon led by students of color who fight for Black Liberation by having a march every Friday leading up to the election. There are twelve main students as leaders, one of which is Mary Gach, an active speaker, and leader for Fridays4Freedom who has been protesting since she was 14 years old. She is now a freshman at the University of Oregon aiming to remind Black students across the U.S. why protesting is an essential part of getting a message out there. “Nobody’s got us as we got us.” Gach’s experience with the fight towards racial equality is unique but is, unfortunately, one that many Black teens can relate to. Having been adopted by an all-white family who struggles to understand the difficulties that she and her little sister go through, Gach amplifies her voice both inside and outside her home. Portland is one of the whitest cities in America, therefore Gach is no stranger to feeling like an outcast and being bullied by her fellow peers at her private Catholic high school. Despite this, Gach did not let their words or actions stop her from creating the first-ever Black Student Union in her high school. “I went to elementary school in a very conservative and rural part of Oregon. I remember being called burnt and charred by my classmates,” described Gach when discussing a memory that sticks with her every time she carries a megaphone across the streets. This memory reminds her of why she leads, not only for herself, but for Black students who have had similar experiences. Gach is a reminder that one should direct their emotions created by these painful memories into something that benefits all.

Williams, Anderson, and Gach continue to protest and spread positivity in their communities. To learn  more about these movements and support Tay Anderson, visit Warriors in the Garden, and Fridays4freedom at: https://i-d.vice.com/en_uk/article/889pgb/warriors-in-the-garden-up-rising, https://www.tayanderson.org/, https://linktr.ee/Fridays4Freedom