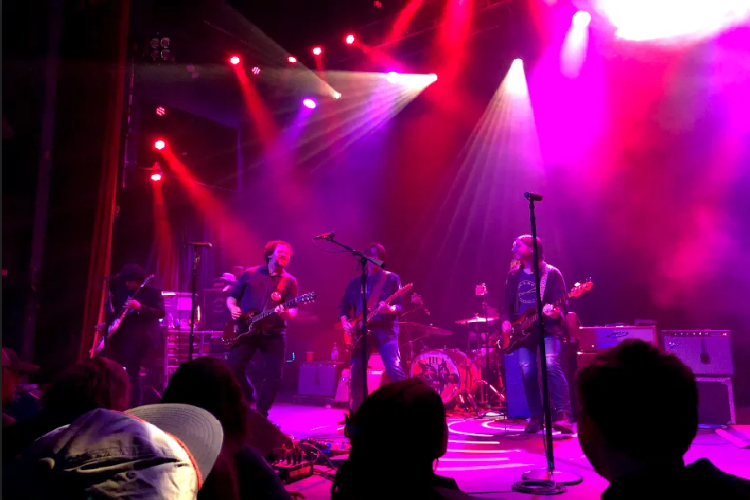 The Drive-By Truckers play a pre-pandemic show at the Gothic Theater. photo by Georgia Hartley

After a year of canceled concerts, live music is back, and I could not be more excited.

One of the last things I did before our three-week-turned-full-year spring break last March was attend a concert. For two months into the new year, I felt like I was right on schedule to see a bunch of shows and fuel my concert addiction. In January, I had seen the Drive-By Truckers play at the Gothic Theater in Denver. I insisted that we be up at the front, the only way to see a concert at the Gothic. Their 30 song set definitely took away some of my hearing, but every minute was worth it. On March 2nd, I headed to the Bluebird Theater in Denver to see Amanda Shires and her band play. Like before, I made sure we were touching the stage as L.A. Edwards opened. Shires played a phenomenal show even with a bit of a head cold. She laughed about being sick and told the audience she had been tested for COVID-19 every day, but her doctors were not sure what it was. She told us how she wished it would be coronavirus so she could “get it over with,” and we all laughed with her and continued to dance and sing with complete strangers, tightly packed, not a mask in sight.

Within a week of that show, live music was put on pause for the foreseeable future. I had been looking at the Red Rocks lineup just days earlier and planning to attend shows with friends, but now everything was canceled. It all felt a little surreal. I missed live music instantly. I usually try to sprinkle in a couple concerts every few months to get my fix, and now I could not. I missed that moment when the music is loud and you are surrounded by all these perfect strangers. You are from all walks of life but you are all there to experience the same thing and it is beautiful and happy. Everything feels okay in that moment. I missed that.

The worst part of it was the uncertainty that everyone experienced. I did not know when I would get to another concert, but most importantly, the artists did not know when they would get to play live again. Amanda Shires, like many other artists, had to cancel her tour shortly after her show in Denver. She was now missing out on a crucial part of her career, as was her husband, Jason Isbell, of Jason Isbell and the 400 Unit. The two teamed together and came up with an idea to livestream a show every day. Each night for several months of quarantine, Shires, Isbell, and the two friends they were quarantined with would livestream a show from their studio barn on their property in Nashville, Tennessee, which they called “Isolounging.” My dad and I both missed seeing concerts so much that we tuned in almost every night. For that hour, we would listen to them play “live” and talk to each other. At times it felt like we were in the barn with them. It was a great way to cope with the withdrawals from live music. Many other bands and artists also partook in this type of “live” show like Shires and Isbell. My all-time favorite band, Houndmouth, produced several livestream concerts and recordings, which I watched and still watch repeatedly.

I’ve kept on with the live streamed shows since March of 2020. I’ve even donated to the artists’ funds to support them during this time of no concerts, but it is not the same, and I have found myself wishing more and more for a summer of concerts. Luckily, on March 30, 2021, over a year after live music was “canceled,” Red Rocks announced that they would be opening this April. Now, it looks like my summer of concerts may come to fruition.

I had tickets to two shows that were supposed to be in the summer of 2020, both of which have now been moved to this coming summer. I am beyond excited to go to these concerts this summer and see The Revivalists and Jason Isbell and the 400 Unit play Red Rocks. I have also bought tickets to see the Jayhawks play at the Chautauqua Amphitheater in Boulder and the Black Pumas play at the Mission Ballroom in Denver. With a year of live music missed out on, I am on the lookout for more concerts to add to my schedule. Whatever shows I end up at this summer, I am just giddy to experience that feeling of happiness with a bunch of perfect strangers again, even if it is masked and socially distanced.