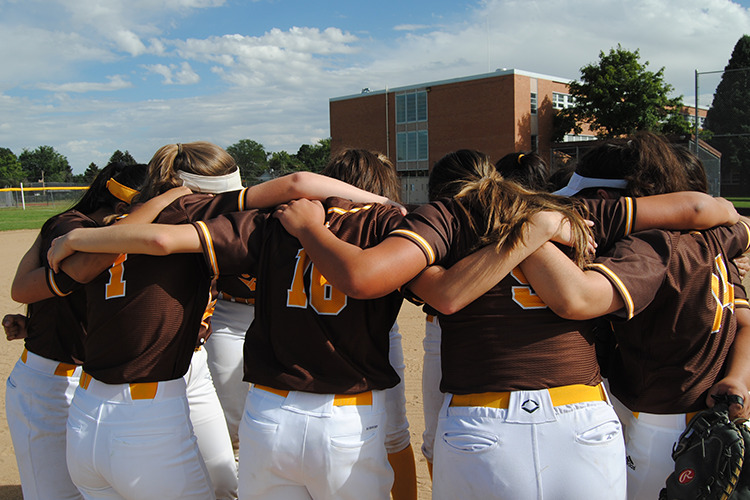 A young TJ softball team looks to continue to grow together. photo by Maria Williams

TJ softball reflects on a season of many accomplishments.

Last season’s unprecedented ways marked a growing season for Thomas Jefferson High School’s softball team, which included a 5-11 record, and earned them 5th place in the Denver Prep 4A/5A league. However, with this season being provided the full regularity of a practically normal season, the team looked to take full advantage of the opportunity presented with no restrictions. Although hopes for a playoff spot were on all players’ minds, the team was proud of the effort set forth that concluded their season, which ended with a record of 10-9, making it a winning season. Additionally, the ladies of the team know the possibilities that await due to not having any seniors on this year’s roster, as they will have the same players returning next year.

Last season, the softball team was allowed 90 minute practices and only played DPS teams. Fortunately, this season followed a less restrictions which included two hour practices and a 19 game season that included ten non-league games. This warranted for a longer season that allowed the full development of a team to take place. Lucy Lloyd, a sophomore at TJ, and captain of the softball team, highlighted how “[the team] bonded together more than we have our past years,” she went on to say that the bond “was more of a friendship than being teammates.” Indeed, the relationship between the players led to their successful season and provides a strong foundation for the upcoming one.

The tides of change can also be attributed to the leadership of the team. With the introduction of a new coach, Katie Tyler, and the work of the team’s three captains, Lloyd, Allyson Brady, and Layla Colonno, the team’s leaders stepped up to set the plate. Colonno, a freshman at TJ, expanded on her role on the team, “[being a captain] is pretty cool. It is a lot of responsibility and a lot of work, but I think it is good and fun to be able to have and make relationships.” The growing leadership of the team is undoubtedly a major benefit to the overall team bond.

With next season brimming with potential, the team will look to build upon the things that have worked for them and continue to grow. Alize Martinez, a junior at TJ and player on TJ’s softball team, recognized that “what [was] special about the softball team this year [was] the bond the team [had] with each other, and even our coach.” Martinez looks forward to next year’s season. “What is important to me about TJ softball is being able to play the sport I love, while also having a family bond with the whole team.” The bond of the team is so important and continual in its growth, which will only prove to be a major factor in the team’s successes.

With TJ softball’s promising response to a “normal” season, the ladies of the team will look back fondly on the bonds established and look forward to using those relationships to dominate. Fantastic job this season, Spartan Softballers!