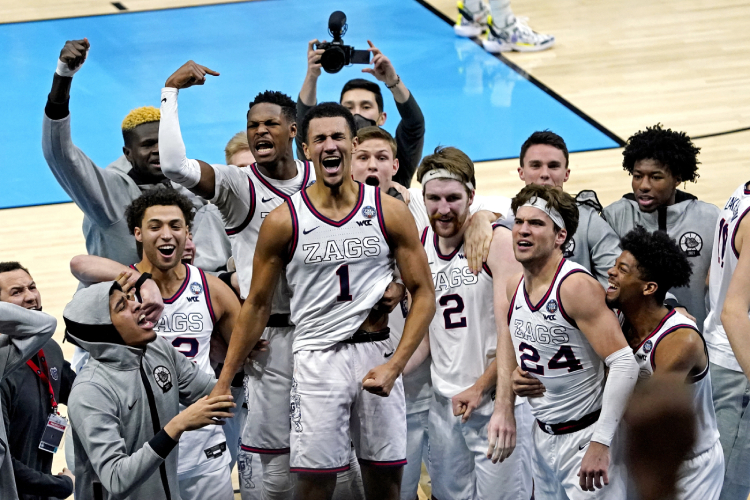 The Gonzaga Bulldogs celebrate after Jalen Suggs (#1) made a half court shot to beat the buzzer and send the Bulldogs to the Championship. photo by bustingbrackets.com

College basketball’s biggest stage made a reappearance in 2021 after being shut down the year prior.

March of 2021 blessed college basketball fans with the return of the March Madness Tournament. With the 2020 tournament being canceled due to COVID-19, this time around felt all the more precious. The National Collegiate Athletic Association (NCAA) created a mass bubble for all 68 teams competing in order to ensure the safety of the players, coaches, and all involved. The tournament was set to take place in Indianapolis inside six different venues around the city.

Selection Sunday, where the seeding for the tournament takes place, revealed the seeding and matchups for the upcoming tournament. The four teams who received the first seed were University of Michigan, University of Illinois, Baylor University, and the top seed in the tournament being the undefeated Gonzaga University Bulldogs. The tournament commenced on March 18th with its usual four play-in games, and finally March Madness was back. The first round happened over the next two days, and hundreds of young athletes sought to prove themselves and their team to the basketball world. Notable victories including 13th seed Ohio beating fourth seed Virginia and third seed Purdue falling short against the underdog North Texas. Despite these surprising results, there is one game that stands out as the first bracket-breaker of the tournament. The 15th seeded Oral Roberts came out on top against the second seeded Ohio State in a thriller overtime victory that left fans dumbfounded. After the first two days, the field was cut in half as only 32 teams remained for the second round of the tournament. This is where the tournament claimed its first fallen first-seed as Illinois was bested by eighth seeded Loyola Chicago. Several other favorites were unable to continue their run in the tournament including West Virginia, Iowa, and Oklahoma State. The biggest surprise of the second round came from Oral Roberts once again as they surpassed Florida by a margin of three points and the Golden Eagles unofficially became the Cinderella team of the tournament.

The Sweet 16 began on Saturday, March 27, and had very predictable results. The only upset was the 11th seeded UCLA beating the second seed Alabama. Unfortunately, Oral Roberts’ run met its end as they fell one shot short to Arkansas. After these two days, only eight teams remained including three first seeded teams. Houston outlasted Oregon State and Baylor and Gonzaga handled their matchups handily and booked their final four tickets as well. The upset of this round came with UCLA, who was forced to win a game just to get into the tournament, beat out the number one seeded Michigan Wolverines.

The tickets were punched and the matchups were set for the Final Four. The Baylor Bears faced off against the Houston Cougars and blew them out in a dominating fashion. The other game was much more exciting. The undefeated Gonzaga Bulldogs, led by three All-Americans, squared off against the UCLA Bruins in a game that will be remembered by all college basketball fans for many years to come. The game was back and forth throughout its entirety and was tied at the end of regulation. With 20 seconds left on the clock in overtime, Gonzaga was leading by two points. UCLA’s leading scorer, Johnny Juzang, had the ball in his hands and willed his way to score a layup with three seconds remaining and the game was tied. The game was looking like it was headed to a second overtime, but Jalen Suggs, an All-American freshman for the Bulldogs, had different plans. Right before the clock hit zero, Suggs banked in a half court heave and Gonzaga remained undefeated.

The matchup America was waiting for was set. Gonzaga and Baylor were undoubtedly the best two teams in the tournament from the beginning and proved it by battling to the Championship game. The Baylor Bears were fresh off their blowout win against Houston and didn’t miss a beat in this game. It was their first finals appearance in 73 years and the Bears went home a little heavier. The Bulldogs were unable to put together any of their magic from their previous game and were blown out by Baylor, ending their perfect season.

Due to COVID-19, the 2021 March Madness Tournament meant a little more than it normally does. It reminded America to cherish the fun filled events that we as people all love to experience because you never know when they might disappear.