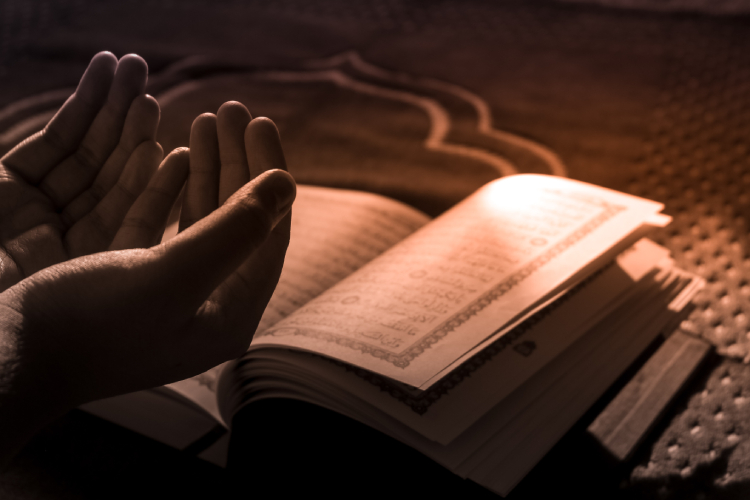 A Muslim making Dua (an act of worship by making a request/ supplication) as they read the Quran (Islam’s sacred book). photo by Faseeh Fawaz

Uncertainty is met with resilience from the Muslim, Jewish, and Christian communities.

Since the dawn of time, people have sought answers to the mysteries of this world and the nature of reality. Through the search for trying to understand the fundamental nature of the world, the universe, and the beings of life, people have been brought together for a common purpose and connected by a single belief—religion.

Religion has provided the earliest laws and guided people on how they should live their lives based on the codes of ethics and principles that are established within each religion. Across all races, ethnicities, cultures, regions, and nations, religion has played a fundamental role in uniting people, shaping societies, building traditions, and forming identities. This year has been an unexpected time for thousands of people across the globe as there has been a lot of uncertainty concerning the future—now more than ever. Typically, adherents of religion would turn to their scriptures or faith for guidance and take comfort in the sense of belonging that comes with being a part of a religious community. Due to COVID-19, the important aspects that have defined the way a group of people practices their faith has been restricted across multiple communities. At a time where unity is now needed more than ever, one of the oldest ways of connecting with one another has been limited, thus leaving people with a mix of emotions as they try to adjust to the new norm.

“[The] social aspect is kind of lacking; we’ve had to learn how to connect differently than we’re used to,” stated Kathryn Lafayette, one of the leaders at the Islamic Outreach Center of Colorado, as she described how the Muslim (Adherents of Islam) community has been impacted by COVID. Islam is both a religion and a way of life for thousands of people here in Colorado. Two of the biggest communal events for Muslims is Ramadan and Eid. Ramadan is the ninth month of the Islamic calendar wherein Muslims fast as an act of worship. This practice is a way for individuals to be more compassionate to those in need and to take the time to reflect on themselves and their relationship with Allah (God). It is a time when Muslims gather with their friends and families to break their fast with a big feast and later on go to the Mosque for Taraweeh prayer, which is held every night for the entire month to relax and to worship their creator. However, this year, the Muslim community saw lots of changes in terms of the way Ramadan would be taking place. On March 13th, Denver Mayor Michael Hancock ordered city venues to close their doors and cancel any events. With this announcement, a lot of uncertainty surrounding the celebration of Ramadan, which was to begin April 23rd, began to take root in the heart of the community. Lafayette recalled the turmoil that had spread, “Do we pray Taraweeh anyways? Do we just ignore the regulations and pray? Or do we try and fit like ten people in the masjid (mosque) and pray? Or do we pray at home or do we pray in a park?” Lafayette expresses the concerns she heard from the community, which stemmed from a place of confusion, uncertainty, and fear. As the number of cases had increased and Imams (a Muslim leader in a Mosque) had begun to speak about the dangers of COVID, lots of people had begun to realize that this virus would stick around for a lot longer, thus requiring patience, faith, and resilience.

Currently, the Islamic Outreach Center of Colorado has been hosting youth groups for young Muslims around Denver in order to create the stability that was lost due to COVID. The youth groups are spaces where young Muslims can gather to learn more about Islam and express themselves and their concerns. One of the responsibilities a Muslim has to their brothers and sisters in Islam is to visit the ill and bury the dead immediately. Unfortunately, due to the new regulations at hospitals, people can no longer visit the ill when they are dying and cannot immediately bury people who have died from COVID-19. Mosques typically hold a funeral prayer for the dead, where the community gathers and mourns, but this too has been canceled, forcing many to adapt. Furthermore, one of the five pillars in Islam is that Muslims must complete a pilgrimage to Mecca if one is financially and physically able to do so at least once in their lifetime. However, this year millions of Muslims were not allowed to complete this journey as COVID-19 spread throughout the world and countries began to close their borders. Additionally, Muslims in Colorado have been implementing social distancing and wearing masks to avoid deliberately putting themselves and others in harm’s way. Many have been finding alternative ways to connect with others through social media or other platforms. Some people have been falling back on the basics and really focusing on strengthening their faith through Dhikr (a ritual performed to remember God), Tahajjud (a prayer performed at night), and other religious practices that can be performed in accordance with pandemic guidelines. Although uncertainty is present, strength and hope continue to prevail in the Muslim community.

The Jewish community has also implemented the new guidelines set by health officials to ensure the safety of those attending congregations and the staff. Social distancing and masks have been widely accepted as people make the effort to prevent the spread of the virus. Many Jewish organizations in Colorado have switched to online classes and groups for the youth, adults, and elders. There are counseling and emergency financial relief services available for those who have been struggling mentally and/or financially, like the Jewish Family Service and Boulder Jewish Community Center. There have been efforts made to build a close-knit and consistent community to bridge the gap that COVID has left. For teenagers, faith is one of the main factors that play a role in determining who they become and what they value. Senior Madelyn Staples described the role Judaism plays in her life, “These are the years when I am getting a taste of adulthood and the lessons provided during service always helps me keep my head up and help motivate me to pursue an excellent future.” Staples is one of the many teens that have a strong connection to the Jewish community and needs that connection as she begins to figure out her role in the world. The Jewish community has responded in a way that prioritizes the health and safety of all its members while providing stability to those who are in need during these harsh times.

“My connection to Wellshire [church] decreased drastically,” proclaimed senior Adelaide McLain as she recalled the events following the COVID-19 outbreak in Colorado. McLain, a member of the Wellshire Presbyterian Church, provided some insight into how she is maintaining her faith and how the Christian community has responded to the pandemic. The youth group’s yearly missionary trip hosted by her church was canceled, along with any in-person activities that required people to gather such as attending community service and youth choir. However, these vital aspects of the community were not completely abandoned. Online services are also an option open to all members in order to provide a semblance of normalcy. The Wellshire Presbyterian Church hosts services Sundays on Facebook and the youth group meetings have also gone virtual with their meetings. There are the occasional small, socially distant meetups. Doing things online provides people with the opportunity to attend services at different churches without feeling like they have made a commitment. This is a great alternative as there have been restrictions on the number of people allowed to physically go to churches. Masks and social distancing have also been implemented across different churches.

The way Christianity is traditionally practiced has changed, such as, attending church service, celebrating Easter, choir, confessions, bible studies, and many more things. However, many people within the Christian community were able to take this time to strengthen their beliefs in the core values taught by Christianity, which include service, thankfulness, compassion, and many other things. The community is able to support one another through tithes (where members are able to give 5-10% of their incomes to the church), which then allocates those funds towards different areas, such as COVID relief. Additionally, people interpret things in different ways, and religion influences how people react to and understand the world around them. “[COVID-19] caused me to experience my faith in a more individual and personal way… [The pandemic] disrupted the ways in which I typically worship, but my faith has provided comfort,” stated McLain as she shared the power isolation has over one’s ability to internally reflect on their choices and life. She described how this period of isolation has allowed her to connect deeper with her religion and community as she is able to seek guidance and comfort within her faith. There is resilience demonstrated throughout this community as members fight to maintain their relationship with each other and their faith.

Religion has the power to unite people under one common cause. It has the ability to give someone purpose, strength, and stability to fulfill their role in society. It is the gift of not knowing everything but trusting in a higher power to guide you in this life and beyond. This virus intensifies the natural fear of the unknown, but through one’s faith and community, one can truly find the power to continue their journey. Despite the current conditions of our world, the Muslim, Jewish, and Christian communities display a great degree of resilience and unity that cannot be broken by COVID-19.