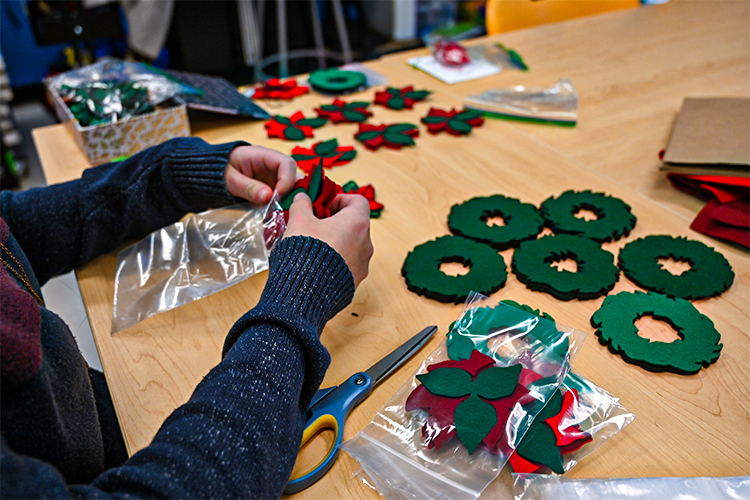 Louise Burns assembles mini wreaths made with laser-cut felt pieces in preparation for the Christmas rush. photo by Atlas Zaina

Makerspaces continue to change the definition of creativity.

Creativity: the use of the imagination or original ideas, especially in the production of artistic work. The definition of creativity has been ingrained into today’s minds: a word, an idea that might not fit someone’s identity. The Hampden Branch Library opened its ideaLAB about three years ago in hopes to provide an area for all ages to create without money being an issue. This library is one of five branches in Denver that contain these ideaLABs.  Although there are maker spaces all around the world, few of them are held in libraries for free and open access for anyone. At the lab, everyone is welcome; customers could know nothing about the tools, yet they’d be welcomed with open arms. Some people walk through the doors not knowing what they want to make at all, while some walk in with files made and ready. Either way, they are accepted into this creative family.

Coming together in a place like this builds character, creativity, and community. Everyone in this world has some sort of knowledge to give, and a makerspace provides a spot for that knowledge to be shared and taught. Angela Sheehan, the newest member of the ideaLAB staff, felt that community immediately.  “I’m not working on as many personal projects in the lab; I’m helping people, but the conversations that happen have really impacted me and the way I think about making in general,” mentioned Sheehan. Creating with a surrounding community leads to new innovative ideas as well as some incredibly long-lasting friendships.

The ideaLAB not only helps develop an increase in creativity and knowledge but it also provides an outlet for one to express themselves. A fellow teen tech, Anthony Meza spoke from his heart when he said, “It made me feel more comfortable with myself, let me be more creative in my own personal way, and let me be who I am.” This space allows people to grow creatively and personally. A long-time customer Louise Burns felt that on a deeper level, “I am able to make things that I never thought I would be able to make again.” After speaking of how she lost access to creative spaces after college, Burns stated that finding a free area to create was, “like my wings were clipped and now they’re like sewn back together.”

This is a place where people are motivated to express themselves by outputting art and creativity simultaneously. About twice a year creators come in as Makers in Residence to teach and show examples of things that can be made in the lab. The most recent Maker in Residence, Hugh Scott, came in to highlight the silkscreen. After coming in for about a year as a customer, Scott encouraged the staff to invest in a screen-printer, a tool he has been using for years. Scott spent as much time as he could teaching both the staff and anyone else who wanted to learn. Eventually, he became a Maker in Residence to continue spreading his knowledge. “I wanted to happy cry all the time when kids got excited like kids got so excited that they could go from the Cricut machine to a t-shirt in under an hour,” Scott declared. He continued to tell a story of another regular, “…she turned around and she told me a couple weeks ago that she went ahead and bought all the stuff to do this at home because she got so inspired from coming to class.” Those who come into the lab have a story of how it has impacted them and each story is incredible in their own sense.

When first walking into the small makerspace hidden in the back of my childhood library, not one person could have convinced me that I was creative. After a year working in that same setting, no one could convince me that I’m not. Working at the lab has not only made me a better person, but it’s also shown me that creativity and art aren’t just one thing. It can be whatever anyone makes of it. The tools provided allowed me to express myself in ways I never could before and the community it produced was like no other. I would have never met the people I know today without this creative setting, every single person quoted in this article I could proudly call a friend. Meza and I started working at the same time in the same position and both of us have grown tremendously. I watched and laughed as he made mistakes and in return, he did the same when I repeated the same mistakes. So many people hold praise and love for the ideaLAB and the family created within it. I suppose that people just have to stop by and see it for themselves to truly believe it.