Making Her Way to Denver 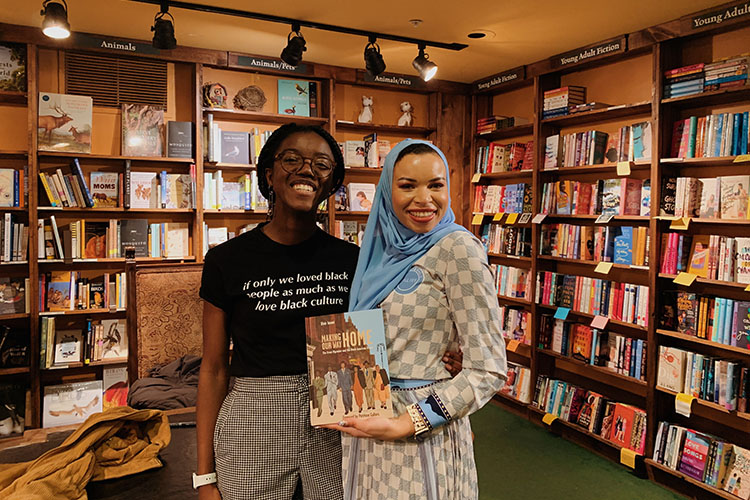 Blair Imani comes to Denver for her Making Our Way Home book tour.

Known for her advocacy for LGBTQ+ rights and author of not one but two history books, Blair Imani is an inspiring, outspoken and trailblazing historian who made her way to our home of Denver at the Tattered Cover Book store on February 24th, for her second debut book Making Our Way Home: The Great Migration and the Black American Dream, a book about the great migration that occurred between 1916 and 1970.

Blair Imani uses her platform advocating for the rights of disempowered groups and individuals including the LGBTQIA+ (Lesbian, Gay, Bisexual, Transgender, Queer, Intersex, Asexual), black, and Muslim communities. A graduate of Louisiana State University with a degree in history, Imani’s studies focused on the reconstruction of the United States. Her mentor, Sadie Roberts-Joseph, who was a Community Activist and the founder of the Baton Rouge Odell S. Williams Now & Then Museum of African-American History, had often said the phrase, “Culture is the glue that holds a people together. Take a step back in time and leap into your future.” Imani did just that, took a step back in time. Imani’s studies and her mentor are just a couple of the inspirations that inspired her to write Making Our Way Home. Her family’s rich history with the Great Migration inspired her as well, and she includes it at the beginning and end of her book.

Black history is often forgotten, misinterpreted, or told from a limited perspective in textbooks, but not in Imani’s. By writing this book, Imani wanted people to understand that black history is a big part of American history. “We’ve been an active part of the story,” she stated. When you read this book, you get a glimpse into parts of American history you would not think that black Americans played a role in everything from art to culture to music. Some of the histories told in Imani’s Making Our Way Home could not be found in the everyday American middle or high school textbooks; that is what makes her book so important to readers of every age.

As an aspiring author, I look up to Blair for being an author and historian who is not only a woman but a woman of color. We live in a society where women like Blair are rarely viewed as authors and historians because they do not “look the part,” Skin color, ethnicity, and sexuality are huge indicators of what historians and authors are supposed to look like. Blair breaks those stereotypes. They do not stop her from writing and telling the history she believes needs to be told. “I don’t let the surprise other people express to me get me down; I channel that frustration to make me work harder.” One can learn a lot from Blair. Her passion for advocacy and teaching important history to readers all over the world encourages readers to find their own passion and tell stories that need to be told. I have learned a lot from you, Blair. Thank you!