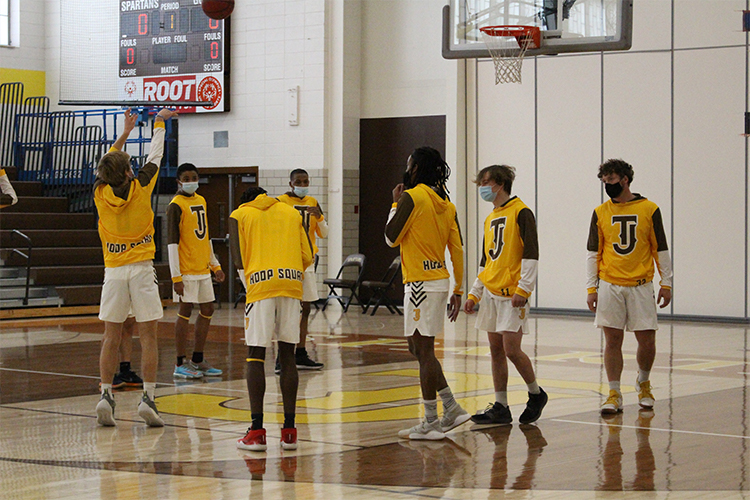 Despite the abnormal school year, the TJ Boys’ Basketball team was able to play another season.

It is no secret that COVID-19 has affected everything. It has halted every aspect of a normal school year, from classes to clubs to sports. Everything TJ-related was put on hold. Luckily, with the right amount of precautions and effort, TJ’s Boys’ Basketball team was able to play another season, giving senior players and the whole team the opportunity to play after a long break. The team was able to accomplish an amazing record: 8-2, which is the best record the team has had in 19 years.

This season for Boys’ Basketball was obviously different from the rest. With COVID-19 restrictions, all players and coaches had to wear masks. Having masks on at all times is extremely important, but it can also take a toll on any player and team. Grant Laman, the head coach of the team, commented on the masked up season, “Every single practice, every single minute of practice, and every game, the team had to play with masks. Coaches had to wear masks. It’s kind of hard to play and coach with masks.” The team had to put in more work this season in order to compensate for being masked up. It is much harder to play and communicate while staying safe from COVID, but the team did a great job following the guidelines.

Another major change this season was that only players and coaches were allowed to go to games. It is TJ tradition to go and show support, but of course, the pandemic had to get in the way. In other years, students would go to these games and cheer the team on. Senior Ryan Moe stated, “Of course I wish the season would be different. I dreamed of playing in front of fans for my senior year so not having that certainly wasn’t ideal, but I did get used to the different feel this season had.” Not having fans to cheer the team on was disappointing. Many students would go to all the games if they could. Who would not want to leave their house to watch the team play? Fortunately, there was still a way to watch some of the games. TJ students were able to watch the games live from TJ’s YouTube channel, which was run by TJ Athletic Director Anne Rice.

With such a unique year, most players were nervous and excited to be back. The energy the team presented was one of a kind. With most players being back at school for the first time since quarantine, the team was just ready to play and see their teammates. This strong return allowed the Boys’ Basketball team to have one of their best seasons, beating almost everyone in the league.

Besides all the restrictions and guidelines this season had, the team played an amazing season. TJ’s Boys’ Basketball team was able to make it to the first round of playoffs, being 24th seeded out of the 32 teams. Unfortunately, the team lost to the ninth seeded team, Pueblo, with a score of 79-70. Officially, the team finished with a 8-7 season but won almost all of their league games, setting their best DPS record. Laman lastly stated, “We took our team photo and had to wear a mask, which is significant for the year we played in masks.”