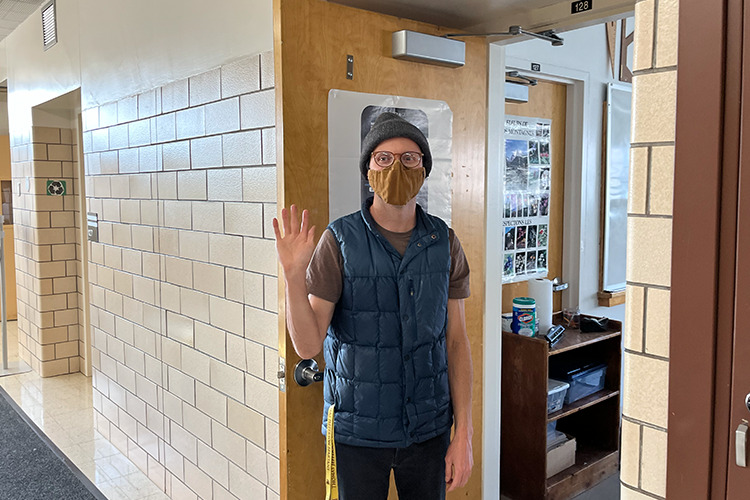 Students enjoy the commitment and laughs Nick Pratarelli puts into his teaching. photo by Shana Saint-Phard

If you ask a high school student what they think is the most difficult math class in high school, the majority will say AP Calculus without a second thought. This is also seen as one of the most strenuous classes to teach because there are new ideas constantly being expressed. However, with the guidance of Nick Pratarelli, math class is an enjoyable experience with lots of opportunities for students.

Becoming a teacher requires loving a topic and having the ability and willingness to share ideas with young curious minds. As a high school student, math was not something that Pratarelli could see as his future career. However, since his main curiosity began with the sciences such as physics and chemistry, math classes were a part of his daily schedule. As a result, he developed an enjoyment for the subject, and although calculus is the hardest form of mathematics, he held an appreciation for understanding the difficult material and being able to pass it on to other students. Being able to comprehend difficult math and share that understanding with others came naturally to Pratarelli, which sparked an interest in teaching math. Despite having little experience teaching, there was an opportunity for him to teach one of the most intimidating audiences, college students, and that was a challenge he readily accepted. Around 2009, Pratarelli was excelling in sharing his knowledge on math material with like-minded students which made him think about becoming a teacher.

A high school teaching opportunity opened up for Pratarelli during 2016 in the math department at TJ, and it has been a journey since then. Springing into the school year as a long-term substitute teacher, it was the opposite of a walk in the park; however, he did not back down from the obstacle and had a successful first year at Thomas Jefferson High School. Pratarelli’s passion for the subject helped him step up to the demanding nature of teaching high school students, full-time. As of now, he teaches five classes which include an Integrated Math 2 course, AP Calculus BC course, and College Algebra course. This schedule provides a very diverse input of students at different levels which is something Pratarelli enjoys because “an aspect of being a teacher is being able to learn from your students.” This was especially important to him because of the sudden change from teaching college students to high school students. The world of high school is completely different than that of college, and so taking in information from those he is teaching helped him adapt to the stress, and this belief led him to where he is today.

When most people think of AP Calculus BC, the level of difficulty throws them off, but Pratarelli finds it to be no problem as “teaching calculus is pretty straightforward because you can place ideas and opportunities into student’s heads for them to apply.” This is also a part of why he chose to teach math. There are other aspects of being a teacher that does not involve the subject at hand, and that is a student’s curiosity. He finds that in all of his classes there are opportunities for students to learn about themselves and be curious about math, as well as their future. These relationships with students are important to Pratarelli because they help him become a better teacher and most importantly, they help students build a better understanding of the subject.

Outside of room 128, Pratarelli is a father, as he recently had a daughter whom he loves to spend time with. During his free time, you will always see him sharing smiles with his daughter and occasionally gardening. He also enjoys bike rides and will bike to work on some days.

Nick Pratarelli has been an insightful and vital addition to TJ because his constant passion for math and ability to apply information makes him a delightful teacher to have, and the person you want in the teaching position of a very demanding course such as AP Calculus BC.