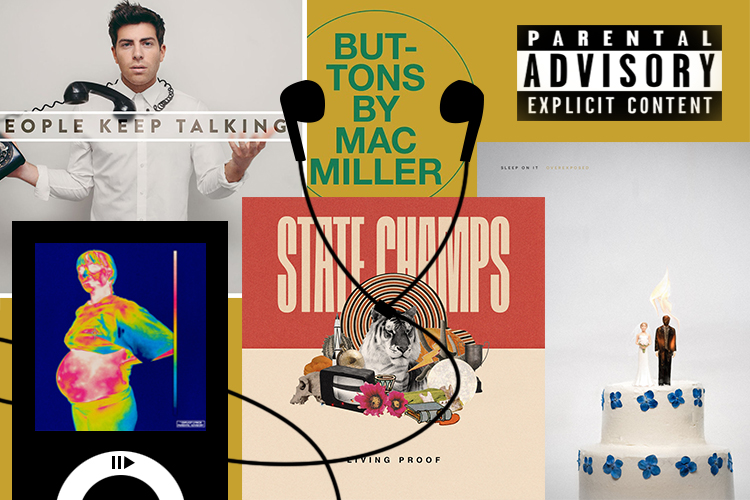 Music is often used to connect with the listeners through themes and memories connected to the songs. graphic by AJ Domagala

People often make playlists to their life, so I decided to make a playlist to summarize my junior year.

While my junior year of high school is coming to an end, I had many songs that hit close to home and made plenty of memories with them playing in the background. These songs can have some explicit language so listen at your own risk, but I highly recommend giving them a chance and maybe making some memories of your own.

State Champs is a pop-punk band from Albany, New York, who released their third studio album entitled Living Proof in June of 2018. Off of this album, “Mine Is Gold” is a song surrounding the topic of betrayal, doubt from peers, and learning to let go. Through the heavy bassline and powerful lyrics, you gain a sense of pride and self respect. The chorus has a strong, influential message that is relatable for anyone regardless of age. It discusses going to the places you are meant to go and being bound for greatness.

Rap collective, BROCKHAMPTON, put out their fourth studio album titled Iridescence, soon topping billboard charts and taking the number one spot. The song “DISTRICT” off the album, shines a light on the topic of materialism and dissatisfaction with one’s surrounding. The line, “Money walk and money talk, but money no make comfortable,” focuses on materialism and its wasteful pursuit.

The song “Buttons” discusses Miller’s daily routine, as he pretends everything is okay, despite facing an internal crisis. Miller’s return to the music industry after a two year hiatus began with “Buttons” and was followed by the 2016 release of “The Divine Feminine”. His lyric, “ There’s a world gone crazy outside, but let’s pretend that it’s alright,” depicts a society that acts solely out of denial. It is easy for listeners to relate to this song because it mainly focuses on the internal struggles many people face on a daily basis.

“Numbers” is a song about luck and discusses how the chance of finding true happiness is one-in-a-million. Along with the slow pop beat, the chorus is uplifting, singing about staying hopeful in rough times. The chorus lyrics are “We’re scratching the paper, no it’s never paid off, but my number will come.” In this song, Hoodie is seen comparing his luck to a lottery ticket, which by definition are unlikely to win. This song is perfect for times where you feel down on luck but want to remain hopeful.

Sleep On It is a five piece pop-punk band originating from Chicago, Illinois. The song “Fireworks,” off of the band’s debut album, also features singer Derek Discanio, who is the lead singer of State Champs. It is a song about not giving up and changing for the better, even if nobody notices. In the bridge of the song, a powerful line states, “Kept myself awake, just to see how it felt to be strung out, and I can say I’ve changed.” This line demonstrates the pain that change brings along with the personal struggle to achieve it. The chorus and overall beat makes this song uplifting and perfect for the summertime.