Memoirs of a Twin 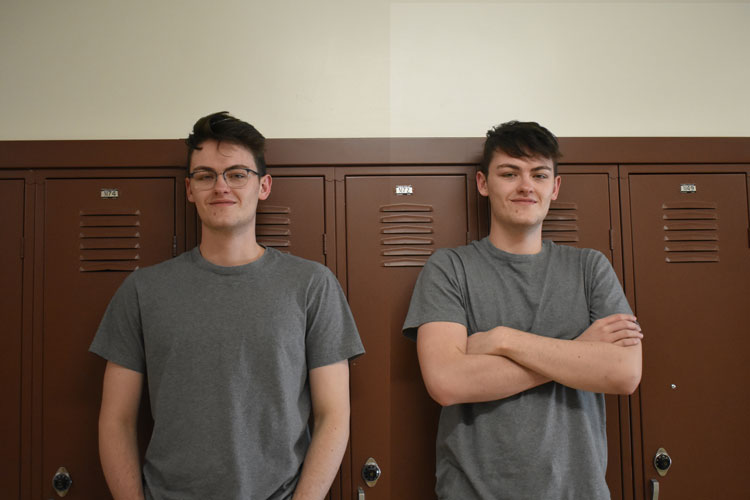 Twins are very accustomed to being misidentified. photo by Baxter Stein

The seemingly complex life of a twin is not all that complicated but there are more than a few things that everyone should know.

What is it like being a twin? How does it feel having a copy of yourself living and breathing right next to you? Well, pretty normal if you were to ask me. Growing up as a twin there are a slew of questions that you are constantly subjected to in social interactions. Oftentimes the person posing the question acknowledges that it is probably something that the twin has been asked before, but usually still crave an insightful answer, despite already understanding that they are being irksome. In this essay I intend to address any questions that one may have for a twin regarding the logistics of their day-to-day life so they hopefully do not have to repeat the same thing over and over again.

To start, people always ask, or sometimes want to guess, whether a set twins is identical or fraternal and oftentimes they do not know what either of those words means. A fraternal set of twins is one that they was conceived separately in the womb by two different egg cells and two different sperm cells. This means that they can be of the opposite sex and have variation in their genetic traits, such as hair and eye color. On the other hand, identical twins are from the same sperm and egg cell; when the two cells meet, as in any conception, they form a zygote which begins splitting into more and more cells and eventually develops into a being. In the case of identical twins, the zygote splits at some point and separates from the other cells, developing an entirely separate being while remaining genetically identical to the original zygote. Among the many incorrect definitions I have heard throughout my years as a twin, my favorite definition of fraternal twins had to be that both were male because they could both join fraternities when they went to college.

More often than not, someone may not know whether they are a fraternal or identical twin because it is not certain until a genetic test has been performed. This means that no matter how similar they may look to their twin, you cannot say they are one or the other conclusively. This does not mean that they are dumb or oblivious, it just means that they do not want to pay good money just to answer this one question that bears no sizeable impact on their life.

Another point of contention for twins can be the word itself, “twin.” I cannot count the amount of times in my own life where I have been referred to as “twin” instead of my own name. When you do not know someone’s name who you see regularly, you do not refer to them as “dude” or “bro” because when they catch on to the fact that you can not remember their name it makes them feel insignificant. If you do not know what name to call someone who is a twin, ask them what it is or at least guess. If you guess, you have a fifty-fifty shot at getting it right. Plus, calling them by their sibling’s name is far less demeaning than calling them “twin” and is something to which they are more than accustomed.

Last, but certainly not least, twins cannot feel each other’s emotions or pain. Although it may seem like there has to be some sort of psychic connection between two twins, there is no way that one can physically or emotionally experience another’s pain. There have been many times where I have had someone pinch or hit either my brother or me hoping to get a reaction out of the other. Pinching or hitting someone is never an enjoyable experience and it just makes you look like a fool.

With all of that being said, do not feel bad for making any of these statements or actions in the past. Obviously whoever you directed them at is not going to hold a grudge against you for doing something that plenty of other people have done before, but it does become annoying. Just know that for them, the experience you are so fascinated by is their life, not a display to be analyzed or prodded.