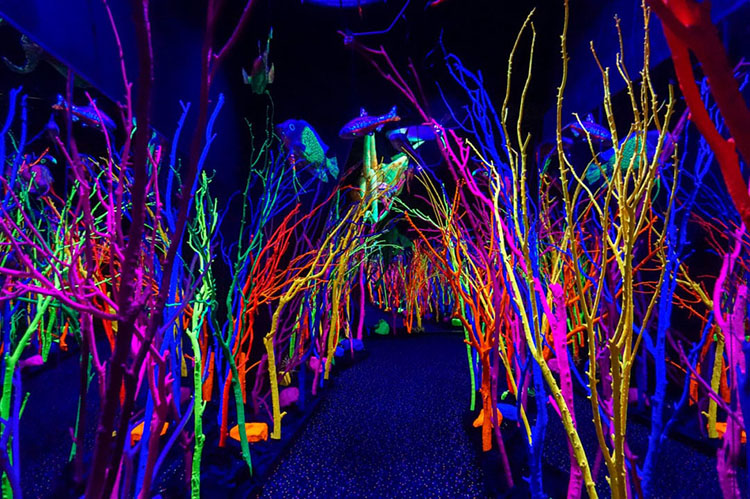 A glimpse into a neon ocean installation in the Santa Fe building. photo by Sanna Boman

The anticipation for the Denver Meow Wolf opening has people holding their breath.

People enjoy being wowed and surprised; it’s a part of human nature, there is something so fascinating about the unexpected that draws people’s attention. That crave of the unknown and the little something that pulls people into experiences they’ve never had before might finally be fulfilled. In the year 2021, the Meow Wolf entertainment group will be setting up shop here in Denver.

Meow Wolf was established in 2008 in Santa Fe, New Mexico, as an art collective in which they pride themselves on their diversity in art media, spanning from painting to engineering. The group is comprised of over 400 artists and employees who work to help create different settings in each installation. Since Meow Wolf began there has been a sense of awe around their work. Their first permanent installation, House of Eternal Return launched in March of 2016 and received the THEA Award (Themed Entertainment Association) for connected immersion. The corporation speaks of encouraging, “…otherness, weirdness, challenging norms, radical inclusion, and the power of creativity to change the world.” Meow Wolf is not only an artist collective but also a public benefit corporation working to help encourage local artists, improve the environment, and support the local community.

The experience of entering a Meow Wolf building is one that is unforgettable. Senior Geronimo Romero-Campbell, who visited the Santa Fe Meow Wolf installation this past summer, explained, “It was crazy to take in everything.” He continued on awestruck and unsure what to think when looking back on it. “I’m still confused and don’t quite understand the story but I remember everything that happened.” Campbell described the demonstration as a “sensory overload” but truly enjoyed “exploring all the different rooms” and finding new sections within the building. Campbell is not the only one who has been left in amazement from the Santa Fe exhibit. Thomas Jefferson graduate, James Schonewise, visited the display a couple of years ago with little knowledge of what was in store. Walking through the double doors of Meow Wolf, Schonewise was immediately filled with curiosity. “My first instinct as someone who does a lot of escape rooms is to tug on things and sure enough, there’s just this secret door,” commented Schonewise. He reflected on the building as a mystery to be solved, always looking for new rooms and clues. Each room provided a different piece of the story and everyone took something different from them. “Even though all of the parts of the exhibit are radically different from each other, none of it is unconnected. Everything feels cohesive as you walk through it,” explained Schonewise.

Even with the Santa Fe exhibits availability many are gearing up to go and visit the exhibit opening up in Colorado. With little to go off of, there are little to no expectations on what Meow Wolf might bring, but there is excitement nevertheless. “I feel like it will fit with people in Denver,” said Campbell, “I can only imagine what it’s going to be filled with and what the story’s going to be.” Not everyone can make their way over to New Mexico, however, those who do should absolutely witness the Meow Wolf experience in Santa Fe. Those who are unable to will not have to wait too long to witness one right in their backyard. As Schonewise left he knew that he would need to participate in another Meow Wolf exhibit. There was excitement in being able to, “walk away knowing [he was] getting a sequel that’s very accessible this time around.”

The thrill for the Denver opening in 2021 continues, but it’s difficult to keep from wanting the opening night to come sooner. Thankfully Meow Wolf is holding a few promotional events to build publicity, the most recent one will be coming up in November. The Meow Wolf Dark Palace event will be open from November 22 to the 24th at the National Western Complex. It is a three-day concert in an art-filled building that is being called a “Dance Obscura” with a line up of 26 musicians. Tickets range from $30-50 dollars so if there’s anyone who is looking to fill a night in November, this event would be one not to miss. Otherwise, Colorado is left to wait until 2021 for the building to be completed and the chance to witness something completely out of the ordinary.