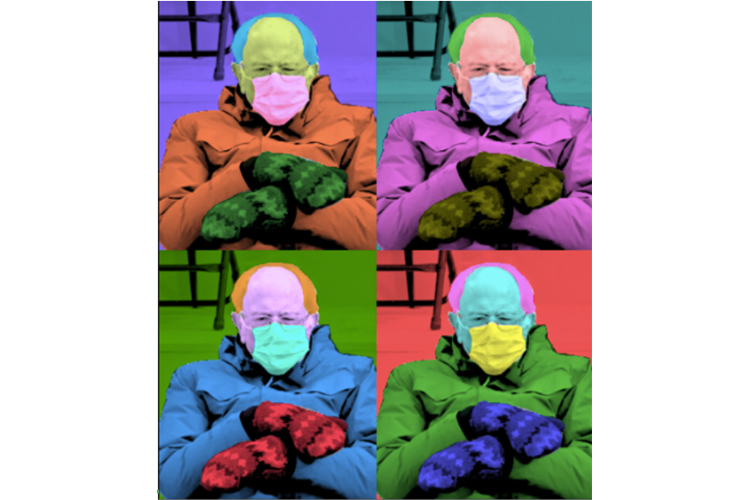 A meme single-handedly became the forefront for charity and awareness.

To say that January 20th, 2021, was a memorable day would be the understatement of the century. With the 46th President Joseph R. Biden Jr. and the first female Vice President Kamala Harris of Jamaican and Indian descent being sworn in, many people in the country got something more than what they bargained for. It was no surprise to see Vermont Senator Bernie Sanders attend the inauguration appropriately dressed for the occasion by having worn a mask while social distancing.

Photojournalist Brendan Smialowski from Agence France-Presse would be the person to thank for the historic picture of the Vermont Senator sitting in a folding chair, legs crossed and bundled in a cozy looking parka and knit wool gloves. Only a few hours had passed before the picture sparked a widespread share of riveting memes, some of which included Sanders edited into multiple album covers, famous stills from movies and TV shows, and various cities across the United States. People were obsessing over the olive green Burton parka and the show-stopping recycled wool gloves. The backstory to the gloves are that they came from an elementary school teacher from Vermont. Jen Ellis, the school teacher, made wool mittens out of recycled plastic that were lined with fleece on the side as a hobby. The pair of warm and intricately designed mittens were gifted to Sanders by Ellis.

Once people learned the origin of the mittens, Ellis was flooded with numerous messages and inquiries on multiple pairs of mittens. She was not prepared for this attention to say the least, as the mitten-making was a small side project. The overwhelming response was not planned, but Ellis and Sanders had a few ideas on how to deal with the growing attention. Ellis made a few more pairs of her unique mittens, and they were auctioned off for a few charities in Vermont. Charities included Passion 4 Paws Vermont, Outright Vermont, and a college savings account for her daughter. Between all three of the charities, she managed to raise 12 thousand dollars. However, Ellis was not the only one to use this funny and wholesome image to raise awareness. Senator Sanders put the image of himself with his legs and arms crossed on shirts, sweatshirts and stickers on his website the day following the inauguration. Everything sold out within half an hour. Due to demand, he added even more merchandise over the weekend and by Monday morning everything was sold yet again. All in all, the Vermont senator raised $1.8 million dollars. According to an article by AP News, Sanders expressed, “But even this amount of money is no substitute for action by Congress, and I will be doing everything I can in Washington to make sure working people in Vermont and across the country get the relief they need in the middle of the worst crisis we’ve faced since the Great Depression.” The incredible $1.8 million that was raised went to various charities to support the state of Vermont such as Meals on Wheels Vermont.

Vermont was not the only state to benefit from the hilarious picture of Senator Sanders. A woman by the name of Beatrice Pacheco, who lives in San Antonio, Texas, created a quilt of Sanders and his now forever iconic mittens. This self-taught quilter made this artwork to be auctioned off, and in return, all the proceeds were donated to the San Antonio Food Bank. She had listed it on eBay; however, the bidding has now been closed, and the quilt was sold for a total of $148.50. Even though the “meme” was not able to raise $1.8 million for every state, it did raise a lot of people’s spirits. While the picture had been taken during the U.S. Presidential Inauguration, it reached people worldwide. It reached people like 16-year-old Bruno Kuenzel from Hamburg, Germany. Upon seeing the growing love for the 79-year-old congressman, Kuenzel expressed that he found the picture to be “very sweet, very wholesome.” When asked how mainstream it was over in the country he replied, “The meme was even utilized in corporate ads and was used to the point [that] it was just annoying.”

Now whether or not other states or countries have gained a benefit from the lighthearted picture, there is no denying that this picture has connected many people through tough times. Whether or not someone knows what is happening in politics, they can look at the laughable image and feel a sense of contentment.