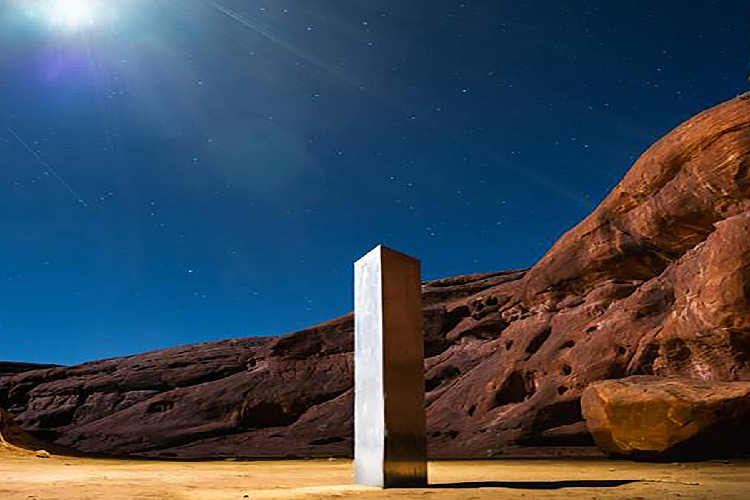 The mysterious appearances of metallic, triangular prismatic shaped monoliths have been reported internationally, sparking a nerve-racking ending to 2020.

In a year filled with petrifying surprises, it seems fitting that a mysterious, seemingly extraterrestrial, monolith would appear and shake the planet to its core. The first monolith appeared in northern San Juan County, Utah, in a canyon composed of red sandstone. This majestic prism over the red canyon looked like an image from a movie set. While the creators of this original monolith remain unknown, it stood unlawfully for over four years in the canyon before being discovered by state biologists during a helicopter survey of the area.

The knowledge of the Utah monolith began when a ten second video of the monolith went viral on TikTok. The newly trending #monolith skyrocketed in early December of 2020, when videos of new monoliths and conspiracy theories became increasingly ubiquitous throughout TikTok and most other social media platforms. After sending the media into a chaos of conspiracies, ranging from the monolith being a piece of modern art to an ‘alien evolutionary device,’ the monolith was removed on November 27th, 2020, by four local residents in Utah. They held this monolith in their possession before turning it in to the Bureau of Land Management, where it has remained ever since. Four days after the removal of the Utah monolith, a new monolith was erected in Romania, on December 1st, 2020. Since then, over 180 monoliths have been found throughout the globe, including one in Boulder, Colorado.

One of the few known facts about the monoliths is solely regarding their appearance. The monoliths have been described as triangular prisms made of sheer metal sheets, standing at about 9.8 feet tall. This original monolith presents an overwhelming similarity to the monolith featured in 2001: A Space Odyssey. In this film, the large triangular prism made of some dark metal was discovered by humans traveling throughout space. After the discovery of the original monolith in this movie, thousands of other monoliths are later discovered through the succeeding films, including 2010: Odyssey Two. It is hypothesized in this story that the extraterrestrial beings that created these monoliths used them for intergalactic travel. Although it is highly unlikely that an extraterrestrial being traveled down to Earth to erect these monoliths, it certainly begs the question as to why they were created, considering their otherworldly appearance.

In most of these monolith cases, many artists have come forward and admitted to their creations, all of whom stated the Utah monolith was their inspiration. Additionally, some businesses have utilized the surge of popularity towards monoliths for their own promotions and advertisements. Some even believe that the monoliths were created by Netflix to promote the upcoming new season of Black Mirror, a science fiction TV show that uses fictional stories to demonstrate the impacts of technology. No matter the reasoning behind the creation of these ethereal structures, humans are currently coexisting with the monoliths as they pose no threat to society. That being said, the monoliths sparked a lot of creativity for harmless conspiracies through social media.