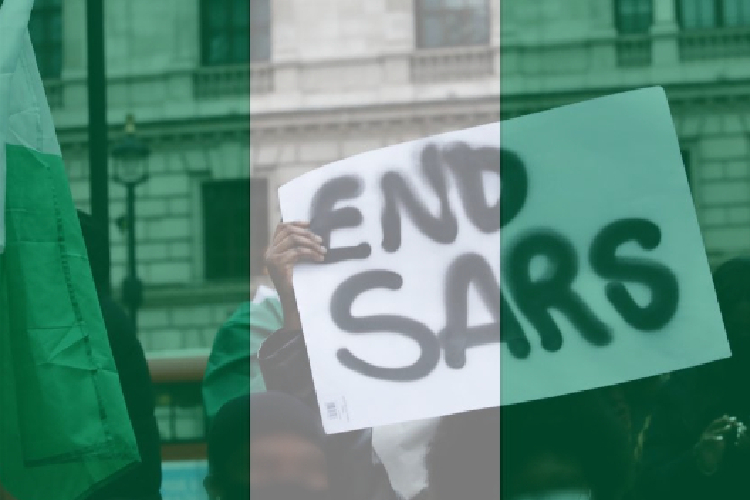 A photo capturing one of the signs during a #endSARS protests in Nigeria. photo courtesy of CBS News

Nigeria’s young population revives a movement in order to demand an end to police brutality.

On October 20th, a peaceful demonstration against police brutality in the Lekki district of Lagos was interrupted by the crackle of gunfire as Nigerian security forces fired aimlessly into the crowd. This was a major escalation of the unrest and tension felt across Nigeria as the atrocious acts committed by members of the Special Anti-Robbery Squad (SARS) surfaced. At least 12 people died in this incident, and some of the bodies seemed to have been removed in order to prevent documentation; the government has denied that any Nigerian security forces were present. However, a protestor named Obianuju Catherine Udeh, a disc jockey who goes by DJ Switch, was on the scene and live streamed on Instagram as she counted the number of casualties and documented this tragic incident. Before her live stream ended she stated, “The whole place is blocked; there are soldiers everywhere and they came in guns blazing. Are they going to shoot all of us? The only weapon we have is the Nigerian flag.” This quote encompasses the resilience, the strength, and the determination that exists within the people of Nigeria to stand against injustice.

For the people of Nigeria, excessive force and abuse of power have long been the norm since the 19th century, when British colonizers treated the people and land as resources to be stripped and depleted. Even after Nigeria gained independence, there was a civil war and a series of military dictatorships until 1999, when Nigeria shifted into a democracy. However, this was not an end to violence as government corruption, violent insurgents, murders, armed robberies, burglaries, and more crimes were prevalent in areas with high rates of poverty, illiteracy, unemployment, and more. In an effort to protect civilians, the Nigerian Police was established in 1820 and was merged with other regional police forces in 1930 to form the country’s first law enforcement agency—the Nigerian Police Force (NPF). Much later on, a Nigerian police unit was created and called SARS.

SARS was created in an effort to combat violent crimes. In a time when violent crime was prevalent, they initially found some success because they operated in plain clothes and used vehicles that couldn’t be connected to the government. However, this success was accompanied by multiple accusations against SARS officers for abusing their power and violating the human rights of detainees. The anonymity that once served the purpose of catching criminals now enabled a different group to commit a number of atrocities. In a report conducted by Amnesty International, they documented 82 cases of torture, ill-treatment, and extrajudicial execution by SARS between January 2017 and May 2020. In October 2018, 24-year-old Sunday Bang was accused and arrested on robbery charges by SARS officers. He was held in custody for five weeks without any access to his family or his lawyer and didn’t receive any medical attention for the bone fractures and other injures received during torture and other ill-treatment. This injustice sparked a youth-led movement calling for the end of SARS and police brutality in Nigeria. The people supporting this movement are demanding the release of arrested protestors, compensation for victims of violence, and the formation of an independent panel to investigate SARS. They also want to begin prosecuting the officers implicated in police misconduct, performing a physiological evaluation of all disbanded members of the SARS unit before redeployment, and increasing the police salary so they are fairly compensated for protecting the lives and properties of citizens in Nigeria.

This movement dates back to 2017 as Nigerian youth began to use #endSARS to share their experiences on violence and encounters with members of the SARS unit. However, this movement was revived on October 3rd, 2020 as a video surfaced showing what seemed to be members of the SARS unit allegedly killing an unarmed man. Enraged at this, Nigeria’s youth began to use #EndPoliceBrutality to call for police reform. This began to trend on Twitter and gain momentum across multiple social media platforms, attracting attention from people and celebrities from all over the world, including Kanye West, Beyonce, Odion Ighalo, Chance the Rapper, Trey Songz, and Jack Dorsey. As the youth began to organize protests and crowd the streets, more and more stories were surfacing. Journalist Gimba Kakanda shared his encounter with police officers as they injured him, smashed his phone, and slashed his tires. In a piece for Time, Kakanda stated, “I was saying my last prayers. I really thought my life was going to end.” Many have similar stories of the trauma they’ve experienced as the people who swore to protect them have abused the power they’ve been given. These stories add strength and resilience to the movement as Nigerians fight for their rights and the rights of others.

On October 12th, President Muhammadu Buhari addressed the SARS protest for the first time on TV, stating, “The disbanding of SARS is only the first step in our commitment to extensive police reforms in order to ensure that the primary duty of the police and other law enforcement agencies remains the protection of lives and livelihood of our people.” The next day, the Inspector General of Police announced that a new unit called the Special Weapons and Tactics Team (SWAT) would be filling the gap that the dissolved SARS unit had left. This has led many to believe that they will continue the crimes of the SARS unit, just under a new name. The Inspector General of Police also ordered members of the disbanded SARS unit to report to the capital of Nigeria, Abuja, for questioning and a psychological and medical examination. These were all implemented in order to address the demands of the protestors and protect their rights. However, uncertainty still remains as police reform has been attempted before but has never made any long-lasting changes. In 2017, President Buhari signed into law the Anti-Torture Act, which criminalized torture. Yet, in a piece by Time, Seun Bakare (from Amnesty International) claimed that no police officers have been charged under that act. Furthermore, in 2018, Nigerian Vice President Yemi Osinbajo ordered the Inspector General of Police, Ibrahim Idris, to reform SARS again, ban stop-and-search raids, and require officers to wear uniforms with their ID. Their attempts to implement police reform haven’t addressed the root of police brutality, as young Nigerians are still getting stopped and extorted for money as the police continue to abuse their power. The people of Nigeria want to see actual change and will continue protesting until it happens.