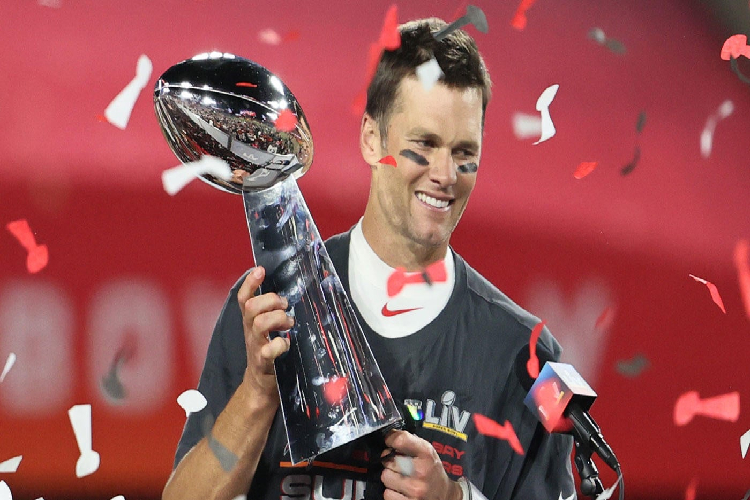 Tom Brady was all smiles during the postgame celebration after winning his seventh Super Bowl ring. photo by cbssports.com

This year’s NFL Playoffs consisted of unprecedented seasons from certain teams, epic battles between elite quarterbacks, and an all too familiar conclusion.

In a time where everything seems to be different and less exciting, some good old-fashioned National Football League (NFL) playoffs brought their usual thrilling games to the TV for all of America to see. The top 14 teams in the league entered the playoffs for the 2020 season, up from 12 from previous years, all with their eyes set on becoming the 55th Super Bowl Champions. The first round of the playoffs this year consisted of familiar faces, but also had several teams who were entering unfamiliar territory.

In the American Football Conference (AFC), quarterback Baker Mayfield led the Cleveland Browns in an upset victory over the Pittsburgh Steelers for their first playoff win since 1994. The Buffalo Bills, led by a young gunslinger named Josh Allen, beat quarterback legend Phillip Rivers and the Indianapolis Colts in a nail-biting game. Rivers later announced his retirement after 17 years in the NFL, and he will go down as one of the most passionate players ever, who could talk trash like none other. 2019 MVP Lamar Jackson won the first playoff game of his career as the Baltimore Ravens knocked off the Tennessee Titans. On the other side of the bracket, the National Football Conference (NFC) first round started off with Russel Wilson’s Seattle Seahawks losing to the Los Angeles Rams. Drew Brees and his well rounded New Orleans Saints team rolled past the Chicago Bears with ease. The Tampa Bay Buccaneers squeezed past the Washington Football Team in a much closer game than what was anticipated. After an action-packed weekend of football, eight teams remained.

The divisional round started on Saturday, January 16th, with the Packers beating the LA Rams and clinching the first seed. Quarterback Aaron Rodgers continued his near perfect season by slicing apart the defense like the meat counter at a New York deli. Later that night, the Ravens and the Bills faced off in a defensive battle in which the Bills won 17-3. The fans in Buffalo had been deprived of a playoff win for 30 long years, but were now headed to the AFC Championship Game with hope in their hearts. The next day of football began with quarterback Patrick Mahomes and the Kansas City Chiefs ending the Browns’ Cinderella story before it even began in a 22-17 victory. The final game of the second round was the most anticipated out of them all: the Buccaneers versus the Saints. Drew Brees and Tom Brady went at it for the first time in the postseason, and the game did not disappoint. Brady and his Bucs outlasted the Saints in what could have been the final game of Drew Brees’ prolific career. If he retires after this year, Brees will finish with the most career yards, touchdowns, and completions of any quarterback and will surely be a part of the Hall of Fame in years to come.

The Championship round was set with the Chiefs playing the Bills and the Bucs playing the Packers. On the AFC side, the Chiefs were clearly the better team and won 38-24. Patrick Mahomes was his usual self, throwing flashy passes for touchdowns, but the Chiefs receiving core made their quarterbacks’ job easy. The loss was a tough one for Buffalo, as they are a young team in their first AFC Championship game. Beating out the defending champs is always going to be a tough task, but the future of this Buffalo Bills team is bright, and their loyal fans will soon have something to celebrate. The NFC game was another matchup in which the spotlight was on the two quarterbacks leading their teams to battle. Aaron Rodgers gave an MVP effort throwing for nearly 350 yards and three touchdowns, but unfortunately for Packers fans, the team couldn’t hang on and lost 31-26. Despite Brady’s three thrown interceptions, the Buccaneers defense picked up the slack, punching Tampa Bay’s first Super Bowl ticket in 18 years.

The stage was set for Superbowl LV. The seasoned Tom Brady and his Tampa Bay Buccaneers squared off against the reigning champs: the Kansas City Chiefs and their young star quarterback Patrick Mahomes. Despite nothing being normal as of late, the NFL Playoffs ended in its usual manner: Tom Brady hoisting the Vince Lombardi trophy into the air with confetti raining down. Only this time, the confetti had a different color scheme, as it was Brady’s first year not playing for the New England Patriots in his career. The Buccaneers controlled the game from the get-go and gave Patrick Mahomes his biggest loss since his college career. After parting ways with the Patriots at the end of the 2019 season, many were doubtful about Brady’s ability to win somewhere else. Fans called him a product of his former coach, Bill Belichick, but this year proved that Brady was the system. Brady’s seventh ring gives him more Super Bowl wins than any franchise in history. His reign of dominance seems to be never-ending, as the 43-year-old assured America after winning the Super Bowl MVP by saying, “We’re coming back…you already know that!” The idea of famous #12 chasing an eighth ring in his mid 40s may seem far-fetched, but like the big dogs in Vegas will say, never bet against Brady.