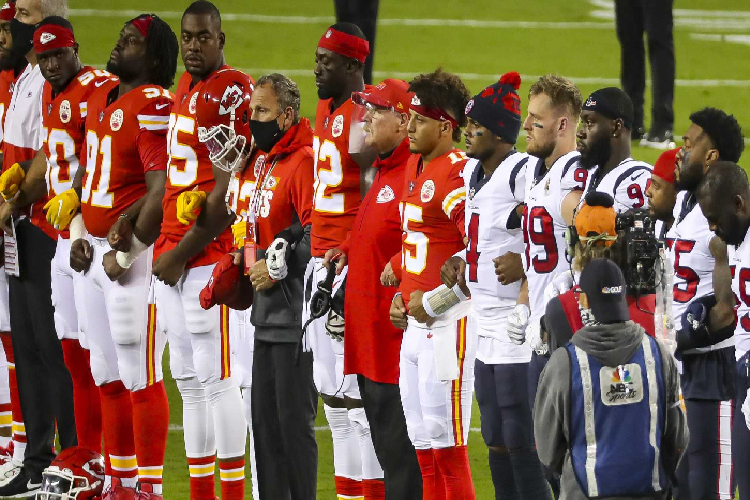 A moment of unity between the Chiefs and the Texans. photo courtesy of Brett Coomer

2020 is set to be one of the most entertaining NFL seasons of all time thanks to an extremely eventful off-season changing the tide of the NFL.

While the rest of the world continues to adjust to the turn of a decade, sports fans rejoice as a new National Football League (NFL) season begins. Player movement became the highlight of the 2020 off-season, causing many other important headlines to be overshadowed such as this season becoming the first season in NFL history to feature a 14-team-playoff format, which is two more teams than before. From this year on, each conference (NFC and AFC) will have three wild card games as opposed to two, and only the number one seed teams will get a first-round bye instead of the top two. In addition, one of the biggest sports betting markets in the world, Las Vegas, now has their very own professional sports team: the Las Vegas Raiders. The team, formerly known as the Oakland Raiders, has begun playing their very first season after officially relocating to Nevada. The Raiders won their first home game in the brand new, futuristic Allegiant Stadium, nicknamed the “Death Star,” with a score of 34-24 against the New Orleans Saints, hopefully paving the way for a new dynasty to arise in Las Vegas

One of the most controversial and widespread media topics to come out of the NFL offseason this year surrounded the team formerly known as the Washington Redskins, who have been a subject of great controversy in the NFL for years. The name ‘Redskin’ has long been deemed a racial slur against Native Americans, and the fact that it took until 2020 for the team to acknowledge this and change their name and logo is absurd. The team representing the country’s capital should in no way be portraying anything blatantly controversial. One of the biggest arguments against the Washington Football Team’s former mascot is that a professional team should in no way be allowed to have a racial slur as their name and appropriate the culture their country destroyed for profit and net gain, especially not for 88 years, in the same state that their national leaders reside. The decision to change the team’s name to the ‘Washington Football Team’ came following the unjustifiable murder of George Floyd as protests against racial injustice swept the United States. Eighty-seven league sponsors, including Nike, FedEx, and Pepsi, threatened to cut ties if the name was not changed, proving money really can make the biggest difference. It will be really interesting to see if the NFL uses this name change as an opportunity to change Washington’s mascot and branding to something that would bring light to and support the fight against racial injustice, as opposed to keeping the name as the ‘Washington Football Team’. Hopefully, the NFL uses this as an opportunity to do something good for a broken society.

Now, the NFL and NFL Players Association did not completely fail in bringing activism and protests to the league, but they still have a ton of work ahead of them. Like the NBA, who allowed players to wear statements of their choice on the back of their jerseys to draw attention towards societal issues, the NFL incorporated a similar ideology by allowing players to display social justice messages on the back of their helmets. While this is a huge step in the right direction for a league once deemed the “no-fun league” because of their strict guidelines and regulations on what players can and cannot do on the field, there are still restrictions on what players are allowed to do. They are limited to only certain names and messages specifically provided by the league. Many believe that the NFL should incorporate some more of the NBA’s leadership in terms of letting individual players and teams take charge in fighting racial injustice instead of creating such strict guidelines that restrict players’ voices. In addition to granting players the ability to display messages on their helmets, the NFL had also been allowing teams to decide whether or not they stay in the locker rooms or gather on the field during the national anthem, as well as letting teams band together and link arms for a moment of unity prior to kickoff. When asked about the moment of unity prior to the Chiefs versus Texans season kickoff game, former super bowl MVP and Chiefs quarterback Patrick Mahomes stated, “With everything going on in this country we wanted to show that we’re unified as a league, and we’re not going to let playing football distract us from what we’re doing and making change in this world… I feel like the Chiefs, the Texans, and the rest of the NFL [are] going to keep making a change in this world.”

Lastly, the most unexpected and challenging change to this NFL season comes from the coronavirus pandemic. Through the first three weeks, the league has been relatively COVID safe. Besides a few confusing decisions regarding fan admission, including the Cowboys allowing 20,000 fans into the stadium (breaking a multitude of social distancing laws) and Browns fans blatantly disregarding social distancing measures on live TV, the NFL has seemed relatively smart and positive regarding coronavirus concerns. That is until September 29th, where reports came out stating that three Tennessee Titans players and five team personnel members had tested positive for the virus following their game against the Minnesota Vikings. Both teams have suspended in-person activities to further assess the situation, and hopes are that the league is able to contain the spread as quickly and efficiently as possible. But, assuming this is the only real infection scare of the season, the biggest consequence of COVID-19 in the NFL has been the lack of fans. The majority of NFL teams have been set to play without fans, excluding ten teams who plan to allow fans to fill a small portion of the stadium’s capacity. Many people cannot help but wonder how the loss of fans will affect team performance. Throughout the beginning of the season, especially in weeks one and two, players seemed tired, lackluster, and unenthusiastic throughout their games. Fans have not seen the same spark in their teams as seen in seasons prior, and players are not able to soak in the energy of their fans when their strength depletes. Some still believe the loss of fans could be a good thing for team morale and chemistry. One of the biggest examples of how teams have adapted to the loss of fans came in week two during an exciting game between the new-look New England Patriots versus the Super Bowl contending Seattle Seahawks. Known for having one of the loudest crowds in the sport, even nicknaming their fans ‘The Twelfth Man’ because of how much their sound impacts the game, the Seattle Seahawks were the team arguably hit hardest by the pandemic. The game finished within inches, with the Seahawks making a goal-line stop on the final drive with the Patriots down five points with the go-ahead touchdown a yard away. Throughout the Patriots’ final drive, players on both sidelines were on their feet, jumping and yelling, cheering their teams on. It was really cool to see players taking the place of fans in giving their teammates energy to work off of. You never really see players that animated on the sidelines, so being able to see teammates hyping each other up should add to the entertainment immensely.

While the circumstances of this season are in no way ideal, one cannot deny how exciting and interesting it should be to see how the NFL will react to the ever-changing world around them. Many believe this season should be an asterisk season, meaning the season should not be considered as equal to the rest. This year’s super bowl champion will likely be viewed in higher regard than former seasons because of how difficult the circumstances currently are and how much more difficult they will continue to become. Nobody would have expected this new era to begin as it so far has, but all the hardship and differences will only strengthen this new generation.