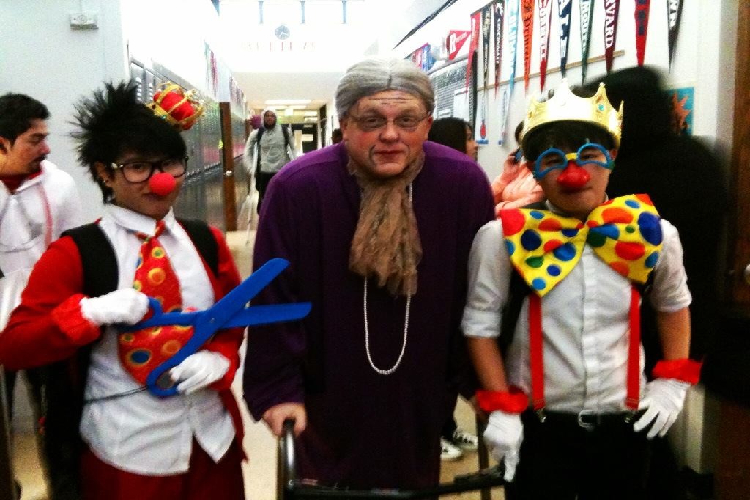 Strickland getting in the spirit of Halloween with his former students. photo courtesy of Brock Strickland

One of TJ’s new teachers is Brock Strickland, who is joining TJ’s math department.

Despite our current changing lifestyle, something that never changes are new additions to the Thomas Jefferson staff. New teachers are common in any school, and this year TJ has added several new staff members to all departments. One of our new additions to the math department is Brock Strickland. Any teacher that goes to a new school has a hard time adapting, but with the new online learning environment, it’s even harder. Strickland has been able to make the most out of this time and is very happy to be part of the TJ community.

Strickland grew up in a city called Towson, Maryland, which is located just outside of Baltimore. He then attended Towson University, one of the largest public universities in Maryland, graduating with a degree in Psychology. He realized that teaching was what he really wanted to do. Going to school for Psychology was the quickest way for Strickland to get a degree to go straight into substitute teaching. In 2011, he decided to move out to Colorado and is now living with his wife and new puppy.

Once Strickland got to Colorado, he taught at Montbello High School for three years until it closed. He said Montbello was a good atmosphere and he enjoyed his time at the school. He then bounced around at different schools such as Lincoln and Manuel High School and joined the Denver Public Schools math department. He soon then came in contact with TJ’s principal Michael Christoff and asked if there were any spots open for teaching in the math department. Luckily there was one, and Strickland was welcome to become a part of the TJ community. Strickland explained that one of the most important things of working at a school was the culture and atmosphere. He has found TJ’s culture and the staff and students throughout the school amazing. Even though this year he started online, he’s had a good connection with the other teachers and administrators in the math department as well.

One of the hardest parts that has come with online learning is connecting with the students. Maintaining the students’ attention has been difficult because of their ability to easily hide behind their screens. This makes it hard for teachers to get to know the students and have them interact with the lessons. Strickland tries his best to keep things normal in the online classrooms. “I try to make it as fun and entertaining as possible,” Strickland explained. Keeping learning normal while being online is difficult, but all the teachers are trying their best. Strickland went on to explain that on the last day of in-person school he was watching students get on the buses and go home while he was talking with his co-worker about how they couldn’t imagine starting the semester fully online. This was a change that no one expected and everyone hoped wouldn’t come true.

The differences in normal life this year were just as big as the ones made in school, but one of the things that didn’t change for Strickland was his love for sports. Hockey and football are Strickland’s two favorite sports to watch, especially going to live games. He is a big Philadelphia Eagles fan, even saying that he flew out to Philadelphia when they won the Super Bowl to watch the parade. The Washington Capitals are his top hockey team and after moving here he started supporting the Colorado Avalanche as well. When he moved out here, Avalanche game tickets were cheap and he admitted that he’d go to tons of games because of it; he didn’t even care if they weren’t playing well.

Sadly, because of COVID-19, he hasn’t been able to go to any live games but he’s been able to keep busy in new ways. Strickland said that he and his wife started gardening during the beginning of quarantine and now they spend a lot of their free time canning all sorts of things grown in their backyard. Strickland has also been keeping active during this time by hiking a lot with his new puppy. He’s been able to find new things he enjoys and adapt to the changes that have come with the new year. We’re super happy the Strickland has joined the TJ community and believe he’s a great addition to the school.