Nine is a Magic Number 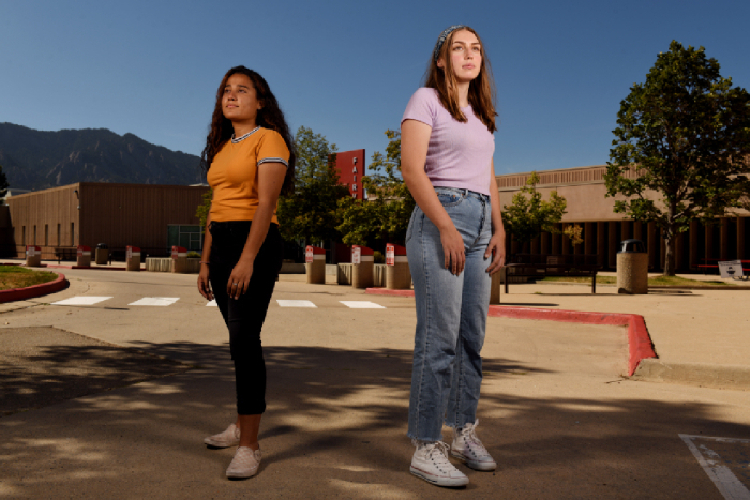 Beatriz Sanchez (left) and Sophie Dellinger (right) stand side by side, ready to help survivors of sexual assault with their new movement. photo courtesy of the Denver Post

A group of students work together to investigate the cause and effect of sexual violence within the Boulder Valley School District.

Statistics show that less than 20 percent of sexual assault and rape cases are reported. Boulder Valley School District (BVSD) Survivors is an organization that understands that heinous crimes will continue to occur and victims will not get the support they need if changes are not made. These changes need to begin with education. BVSD Survivors was formed after multiple girls came forward with sexual assault allegations against a senior at Fairview High School. As a result of these allegations, three students helped start this movement for the survivors of sexual assault and to fix the deep-rooted systemic problems within their school district. Two 2020 high school graduates and one junior at Fairview, Beatriz Sanchez, Sophie Dellinger, and Annika Spilde, put their passion for justice into this new organization in order to help support survivors.

When the group looked at the district’s policies, they found there was no Title IX coordinator, an individual who oversees sex discrimination complaints, as well as inconsistencies with the availability of resources, such as the absence of training for administrators and teachers. Although they saw major discrepancies, these students were able to find solutions for them. These women have met with their high school and district administration in an attempt to repair the district’s response to sexual violence. While they have successfully convinced the district to do the bare minimum, there is still more progress to be made.

Due to the COVID-19 shutdown and restrictions, the district has slowed the process of fixing these issues. BVSD reached out to the organization Moving to End Sexual Assault (MESA) prior to the pandemic. MESA was able to form a districtwide plan that includes 792 hours worth of educational presentations available to students, parents, and staff at these schools. Overall, this plan would cost $79,050 for the district. MESA has not yet heard back from BVSD since the pandemic began. This silence from the school district is deafening and indicates a priority shift to pandemic relief and virtual learning.

“We followed up with a meeting with our superintendent, Dr. Rob Anderson, which he has made a lot of promises that he has yet to keep, one of which is to hire a Title IX coordinator. I’m not going to entirely quote him on this, but [Dr. Anderson] said something about ‘just not having the funds,’ which as an affluent school district is just stupid,” said Sanchez. This pause in working to find solutions alongside their claim to not have the funding is frustrating for these students. For them, it shows that BVSD does not see sexual assault survivors as people who need funding as part of their support.

Title IX was added as part of the Education Amendments of 1972. Title IX states, “No person in the United States shall, on the basis of sex, be excluded from participation in, be denied the benefits of, or be subjected to discrimination under any education program or activity receiving Federal financial assistance.” However, Title IX does not just pertain to the prevention of discrimination based on sex. It was created for the overall protection of equal opportunities and access to the education system. The prevention, remedies, and overall addressing of sexual assault/violence are all covered under Title IX. An institution such as BVSD must comply with these policies, three of which the BVSD Survivors are focused on obtaining: a Title IX coordinator, a notice of non-discrimination, and a grievance procedure. Though the district already has a coordinator, she is not a full-time employee. District leaders have expressed that they do not have the funds to hire one at this point. Near the beginning of the support organization’s work, the district’s website had no grievance procedure, complaint form/procedure, or survivors’ bill of rights. The lack of these forms and documents made BVSD “out of compliance” with Title IX.  Over the summer, these forms were made available on the district’s website. However, the district’s Survivors’ Bill of Rights is still missing key points, and while this does not place them out of compliance, it does make it harder for survivors of sexual violence to access the resources they need.

The impacts of the lack of staff training and resources for survivors inevitably led to allegations being brought to light after the arrest of the senior in 2019. This lack of training made an impact once again in late August 2020, when a social worker at Fairview High School was put on trial for failing to report an accusation of sexual assault. The woman was ultimately acquitted. In terms of how the district handles reports, Spilde said, “I know people who have gone forward and who have reported it and have later regretted reporting it because it was handled so terribly.” The group also expressed that they felt the school was waiting for the students to “hop off the trend,” as if sexual assault was not a serious issue to BVSD or its students. When the accusations were initially released, many students came forward to try to help change the culture, but this group of students dissipated over time. “We are only in this district for four years and they don’t want to deal with it because it seems once I graduate it will just go away and they won’t have to make any of these policies changes, put the money in, and put in the effort,” said Spilde while discussing the administration’s reluctancy to enforce change.

The faultiness of the district’s Title IX was not the only reason for their irresponsibility. The school’s dynamic of athletes being favored is believed to be one of the reasons there was little action taken. The abundant promotion of the athletic program was demonstrated when BVSD reallocated money from “a Latino-based class to the student council so the football team could have fundraiser events,” Sanchez confirmed. The social hierarchy created by the school supported the increase of victim-blaming. “A lot of athletes at our school think they are untouchable and can get away with anything,” stated Dellinger. These ideas fuel the hush culture within the district.

With the recent sexual assault allegations associated with Denver Public Schools (DPS), the importance of understanding what students can do to prevent sexual violence is growing rapidly. These allegations led to a protest at South High School, where more than one hundred students came to show support for victims and share their own stories. This protest is just the beginning of a significant culture change within the DPS system.

According to Sanchez, the key to getting involved is “getting informed via knowyourix.com. [Students] need to know what they want and how the district is able to do it.” Understanding what rights a student has and what the district must comply with in order to protect those rights is crucial to fixing the system. When it comes to implementing change, Spilde says “unless you give them exactly what they’re asking for and you’re able to tell them what you want and take a lot of the work off of them, it means you’re just adding to their plate; they’re not that inclined to talk to you.” In regards to DPS, the district has a Title IX and a full time Title IX coordinator. However, the policies implemented by the district is just one part of the problem, the cultural and social responses from the student body continues to have a lasting impact.

Students need to have some responsibility; victim-blaming and hush culture is something prevalent in almost every high school in the nation. The stigma around being a victim of sexual assault or violence, especially in high school, is just another factor that makes it increasingly difficult for survivors to come forward with their stories. This is not a trend, a freak incident, nor is it a one-time situation. This is a systemic issue impacting millions of people that must be addressed by every district, every school, and every student.