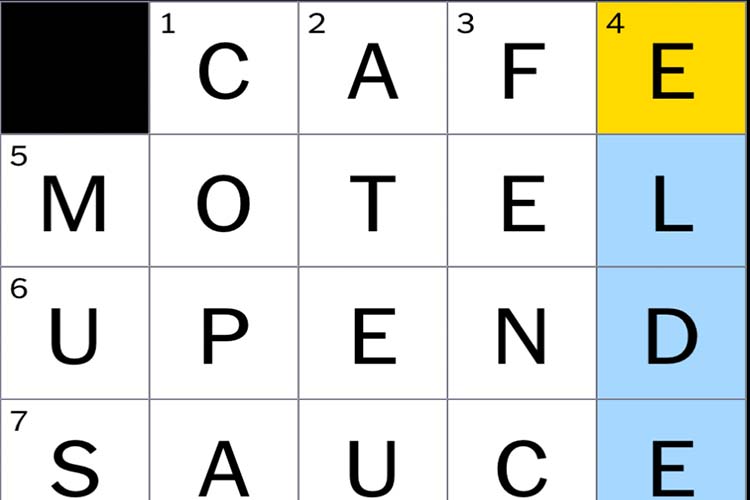 The mini-crossword is a great way to play the crossword for free. photo by Jessica Nesbit

The crossword puzzle has a long and complex history of entertaining the world.

Crossword puzzles are more than just filling in blank squares and hoping for the best. They can be incredibly complex works of art; the clever wordplay is usually spread across 225 squares to create images and reveal themes.

The history of crossword puzzles began on a fateful day in 1913 when a staff member of the “Fun” section at the New York World, Arthur Wynne, created the Word-Cross. The first word-cross was diamond-shaped with a hole in the middle rather than the square that is seen today. The word-cross was an immediate hit. The game soon spread to papers across America and Europe. Surprisingly, the New York Times did not publish crossword puzzles in their papers until much later. In fact, an editor of the NYT in 1924 called crosswords a “primitive sort of mental exercise.” It took until the second world war for the Times to publish its first crossword. The Times cited a need to lift American spirit during a bleak period as their main reason for publishing such a game. The popularity of crossword puzzles led to the documentary Wordplay to air in 2006. The documentary featured many crossword enthusiasts, such as Bill Clinton and Bob Dole. This top-rated documentary facilitated a resurgence of popularity, particularly among younger Americans. The newfound love of crosswords was further spread when smartphones became widely available. This allowed apps for on-the-go solving. A monthly subscription of $7.99 is required to access the crossword archive on the Times’ app; however, the mini-crossword is free to play.

Benefits to crossword puzzles are widely disputed. Examples of potential benefits include improved cognitive function, increased vocabulary, and slower memory decline in the elderly. However, according to a study published by the American Psychological Association, the effects of completing crossword puzzles on cognitive function are negligible. Even if the benefits of crossword puzzles do not extend to the realm of physical health, expanding vocabulary and recognizing patterns that are often associated with the puzzles are still impactful and should not be overlooked. The effort that goes into creating crossword puzzles is also incredible. The New York Times even wrote an article covering the different types of clues that crossword puzzles use. Who would have thought that the wording of a clue could be enough to fill out half of the puzzle?

Crossword puzzles are fun. The excitement that I feel when I see the New York Times’ Crossword App notification can quickly change my mood. The 30 seconds that I hopefully spend completing the daily mini crossword can change the course of my day. They also bring me closer to my friends and family. Senior Sam Post got into crosswords, looking for friendly competition among his friends. “I feel like with the crossword I find myself learning something. I have definitely learned a few new words. You have to look at things with a bigger picture sometimes.” When asked about the benefits of crossword puzzles that he has noticed, he states, “I don’t necessarily think my vocabulary has gotten a lot bigger but it gives me an appreciation for words.” I started becoming an avid crossword player over the summer of 2021. I went to the AppStore on my phone and downloaded the New York Times crossword app. Every day since then, I have been committed to completing the crossword. I think that you should be committed too!