Nooses Off: The Autumn Play 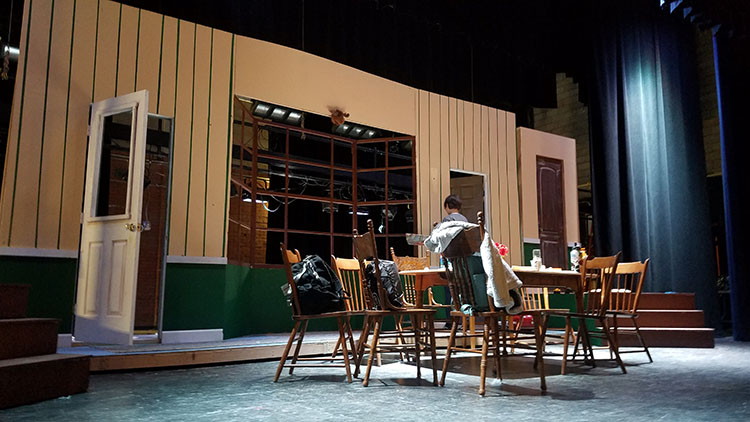 Atlas Zaina works on the set for the upcoming show. photo by Kaylee Held.

Thomas Jefferson High School’s Theater Club is busy preparing themselves for their first big play of the 2019-2020 school year, with a murder-mystery/comedy taking the stage.

Tambyr Reed, Thomas Jefferson’s Music Teacher, is excited to bring Nooses Off to light on November 12th, 13th, and 14th. The play chosen for this fall is written by Don Zolidis, an author who creates free scripts for auditions and educational purposes. Nooses Off is a high school adaptation of the 1982 play Noises Off, written by Michael Frayn. The plot follows an amateur theater company’s murder mystery play, which premieres on opening night, but the real mystery is whether the cast and crew can get through it all. It is no easy task, with the costume designer bent on revenge, actors occupied with showmances, a suitcase cast for the role of nine, and the stubborn playwright refusing to admit that Nine Little Indians owe Agatha Christie. “The play that it is based on, Noises Off, is ridiculously funny… even during the readings and during callbacks, Mr. Moss and I were cracking up,” Reed remarked. She has been hosting plays at Thomas Jefferson since 2013, after taking over for Michael Palmieri.

With so many people working behind the scenes and on stage in the upcoming production, it is essential to know who does what. The leadership team consists of Tambyr Reed as the director, English Teacher Andre Moss as the assistant director, Michael Palmieri as the drama teacher and coach, and AJ Domagala as the senior stage manager.  In total, there are just under 40 students in the production, be they actors, tech crew, or prop makers. The sixteen actors consist of Abby Mulligan, Elle Benson, Paige Mulligan, Nura Abdusalam, Marcus Burns, Joi Matthews, Macey Manzanares, Amy Wegewitz, Eli Leahy, Peter Bodin, CeCe Prime-Morales, Jadyn Wells, Juanita Williams, Jael Iyema, Maddy McClure, and Lucy Alden. The Production Crew lists AJ Domagala, Noah Leahy, Owen Monroe, Olivia Mazzullo, Cedar Miera, Dameon Bystrom, Rachel Teska, Paige Yates, Nathan Perl, Karl Eisenbarth, Atlas Zaina, Xander St. Germain, Kai Salmon, and Eric Oss. Multiple other kids ranging from freshmen to seniors help out in the studio by building wooden props, styling makeup or hair, managing the lights, and setting up the sound system. The cast and crew met daily from 3:00 p.m. to 6:00 p.m. in September, and will increase their practice time by an hour in October.

Peter Bodin, sophomore, stars as Arnold in the upcoming production. He has been doing theater since sixth grade. “It always has a really good community, and it’s a good way to entertain other people,” Bodin explained. “Getting to spend time with my friends is my favorite part.” This will be the first play he stars in that will be performed at TJ.

For anyone interested in enrolling in the Theater Club, the members are provided with snacks and “homework time” before practice to ensure that they are able to keep their grades up and stay in the rehearsal. Positions are available at the beginning of the year, and auditions usually open in late August. The actors, makeup crew, tech crew, and stage building teams always appreciate new faces. Not only is the atmosphere incredibly laid back and relaxed, but students are able to spend time with friends after school doing things they enjoy! For any inquiries or questions about the club, please contact Tambyr Reed. As for Nooses Off, tickets will cost $5 for students (with IDs) and $10 for everyone else. To buy tickets, please contact Reed, a cast or crew member. For updates and photos, visit the Theater Club’s Instagram at @tjhs.theater!