Office of the Former President 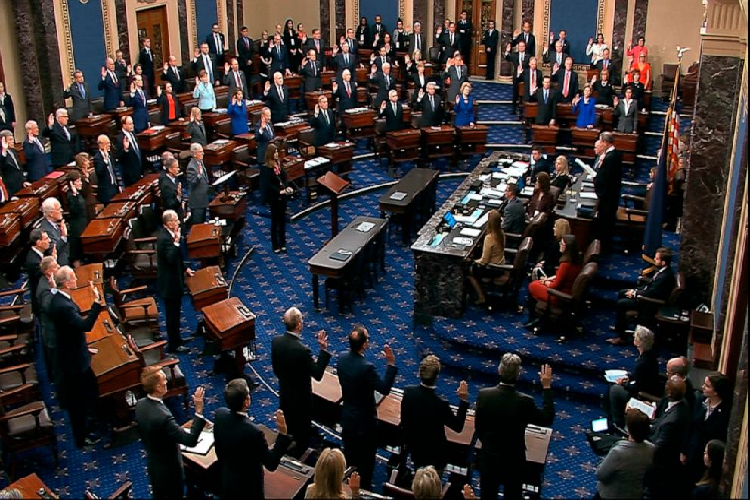 The 45th President of the United States, Donald J. Trump has proven to be a historic president in more ways than one.

Donald Trump is the only president in the history of the United States to be impeached twice, as well as the only president to have been impeached after his term ended. Congress’ ability to impeach a president is one of the many ways our democracy stays true to its people. The process of impeachment is extensive to ensure that it is in the best interest of the American majority. Article I, Section 2 of the Constitution gives the House of Representatives the sole power of impeachment and Article I, Section 3 of the Constitution gives the Senate the power to try all impeachments. In order for the president to be convicted, the Senate has to have two-thirds of all members in agreement. Only Andrew Johnson, Bill Clinton, and Donald Trump have been impeached, and the Senate convicted none of them. The process of impeachment has many steps to ensure that power is not limited to one section of government. While checks and balances are an important step to securing democracy, they can make it difficult for the polarized two-party system to affect change. This collision is apparent in the case of Donald Trump’s impeachments. Although Congress passed the article of impeachment twice, when taken to trial in the Senate, Trump was found innocent both times. The likelihood of Trump’s indictment was slight, due to the Republican majority in the Senate.

The first time the House of Representatives rolled out the articles of impeachment was in December of 2019. Trump was charged with abuse of power and obstruction of Congress, the causality of which was a phone call he had with Ukrainian President Volodymyr Zelensky. During the call, Trump congratulated Zelensky on his party’s victory in the parliamentary elections and Zelensky told Trump how much he admired Trump’s presidency. The two continued to talk about how the United States and Ukraine could serve as useful allies, which led to Trump asking Zelensky for a favor. This alarmed some of the White House staffers because Trump seemed to be asking for Ukraine’s assistance in finding dirt on Democratic presidential candidate Joe Biden. After the transcript was released, Trump insisted that the call was perfectly innocent. This phone call led to Trump’s first impeachment, which he was acquitted of in February of 2020.

Trump’s entire presidency was riddled with controversies, the most extreme of which occurred in his last month of holding office. On January 6th of 2021, the U.S. Capitol building was stormed by radical Trump supporters. They were fueled by Trump’s claims that the 2020 Presidential Election was fraudulent. The insurrection ended in five deaths and more than 140 injuries. After the chaos, Trump was impeached for a second time on the grounds of “incitement of insurrection.” The storming of the Capitol building was preceded by numerous claims from Trump, across several social media platforms, that the 2020 Presidential Election was won by Joe Biden through voter fraud. The former president made several futile attempts to overturn the election results, which led the House of Representatives to adopt one article of impeachment against him. The Senate trial resulted in a “not guilty” verdict. However, the results showed that not all Republican members of the Senate felt Trump was not guilty. In fact, seven Republican members found Trump guilty of “inciting an insurrection,” bringing the final vote to 57 guilty and 43 not guilty. With just ten more votes on the guilty side, Trump would have been the first president to be convicted of impeachment.

Trump’s entire presidency was eventful and kept the country on its toes for all four years. Historic in more ways than one, it begs the question: is our government still one that works for the people? The bipartisan design might be stopping the government from holding the best interest of the people at mind.