On to the Next Level 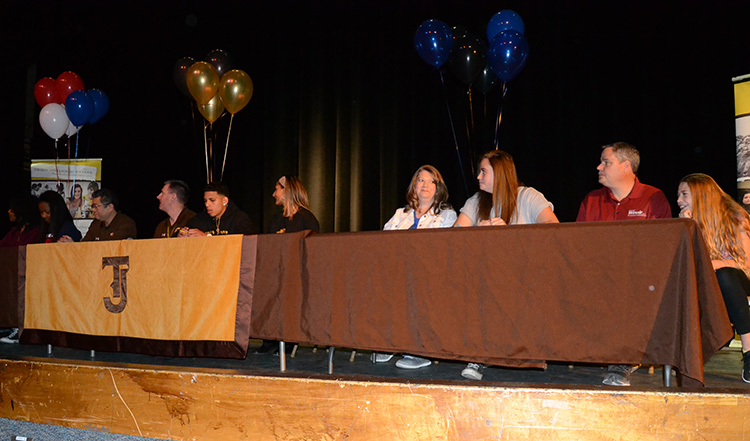 Students and their families celebrate moving to the next level on signing day. photo by Sasha Mesropov

Three senior Spartan athletes signed their letter of intent to play their respective sports at the collegiate level.

On April 15th, 2016, three senior Spartans signed their National Letter of Intent in order to continue playing the sports they love at the collegiate level. The first to sign was Jordan Graham, a star volleyball player who was a key member of the varsity team for four years. Graham committed to play at Lamar Community College in Lamar, Colorado. The second of the group was Henry Cooper, who committed to play at Nebraska Wesleyan University in Lincoln, Nebraska. Cooper spent all four years at the varsity level as well, improving significantly each season. The final signee of the day was Jurnee Farrell, who committed to play at the Division One level at Howard University located in the Nation’s capitol. Farrell, who spent her freshman year at East High School, transferred to TJ and made an immediate impact her sophomore year.

Graham has started for the varsity team for every game since her first as a freshman, and has been a star ever since. She specialized as a setter and has perfected her craft over the past years. “It took a lot of hard work. I had to practice hard not just during the season, but in the offseason as well for my club team,” said Graham. “The offseason is when I improved the most.” She finished fourth in the Denver Public League in hitting percentage, third in attack kills, and second in serving aces. Graham will be taking her talents to Lamar Community College in Lamar, Colorado, located about 200 miles southeast of Denver. “It just seemed like the right fit for me,” Graham continued. “I’m so blessed to be able to continue playing the sport I love.”

Like Graham, Cooper spent all four of his years at TJ on the varsity team and improved significantly each season. “I watched a lot of tape and learned on what I had to work on,” stated Cooper. “Whatever I felt like I could have been doing better in games, is what I focused on most in practice and during the off season.” Cooper is known as a lockdown perimeter defender and ultimately caught the eye of Nebraska Wesleyan head coach Dale Wellman. “They are getting a hard worker and someone who loves the game more than anything,” he continued. Cooper spent most of his days playing for the Colorado Miners, a club team that was co-founded by his father, Henry Cooper Sr. “My father has helped me so much. I don’t know where I would be without him.” Cooper also mentioned his brother Xavier, mother Lenez, coaches, teammates, and others as people who helped him along the way. “I have so many people to thank. I’m very blessed.” Cooper will be taking his talents and outstanding work ethic to Lincoln, Nebraska and will make a great addition to the Prairie Wolves.

Farrell, who spent her freshman year at East high school, rejuvenated her volleyball career by transferring to TJ. “It was a great decision,” stated Farrell. “TJ has a much better volleyball program and my teammates and coaches were very supportive of me here.” Farrell was a team captain along with fellow senior Graham and led the Spartans to an impressive 19-5 record. She played setter and finished second in assists in the Denver Public League and third in blocks. Farrell credits her club team, 303 Volleyball Academy, as a crucial part of her growth as a player. “If I didn’t play club, I probably wouldn’t be playing at the Division one level next year,” she said. “Being able to play year-round is huge. If I had the winters and summers off, I would get rusty.” Farrell thanks her parents, brother, coaches, teammates, and friends for always supporting her.

For Graham, Cooper, and Farrell, their best days are only ahead of them. They are tremendous athletes who excel in the classroom, which bodes well for college athletes. “I’m so grateful for TJ,” stated Graham. “I couldn’t imagine playing for any other school.” All athletes vow to represent TJ wherever they go. “Wherever I go, I’ll never forget my roots. I’ll always bleed brown and gold,” emphasized Cooper. These athletes have done so much for TJ, but TJ has done just as much for them. They will use the valuable experiences they gained as Spartans to allow them to reach new heights not only as athletes, but as hard-working individuals.