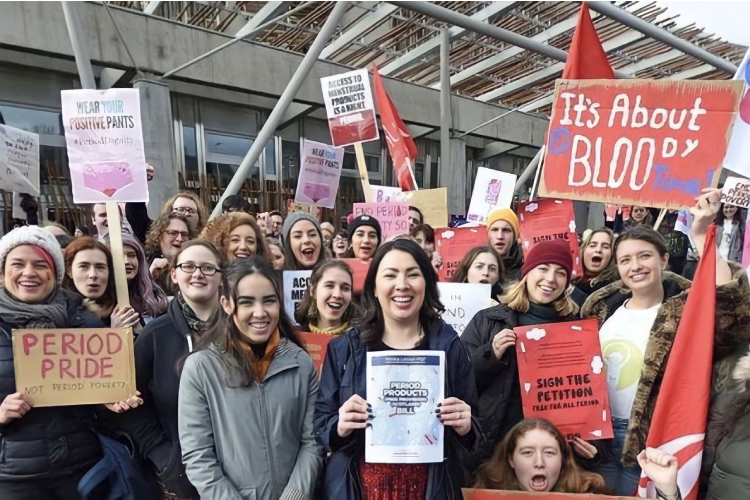 A photo of women pushing for the end of period poverty at a campaign. photo courtesy of The Daily Mail

A bill in Scotland was able to help women facing period poverty.

Globally, a minimum of 500 million women experience period poverty monthly. In Scotland, it is an issue 20% of women face. Period poverty is when women with low income are not able to afford or access menstrual products. Scotland has tried to put a stop to period poverty through free public access to period products. As Nadia Florence, a woman from Scotland, stated, “It feels as though we are beginning to discard taboo and invite change.”

Scotland Parliament passed the Period Products (Free Provision) Bill in November of 2020, and it became an act on January 21, 2021. The Parliament voted unanimously in favor of the bill. First, under the bill, the Scottish government must set up a comprehensive scheme that allows anyone who needs period products to get them free of charge; this scheme needs to be in operation two years post the bill being passed. Second, schools, colleges, and universities need to have a wide range of period products free and accessible in their bathrooms. Though in 2018, Scotland had already made these products free at all schools, this bill will protect that decision. Lastly, the Scottish government has the power to force other public establishments to provide free products. The bill also establishes that it is up to local authorities and school administrators to ensure these products are available to any and all who need them. Overall, the bill will cost the government about 8.7 million pounds or 12 million dollars by 2022. Though this seems to be a lot of money, it is estimated that at least 20% of women in Scotland will be taking advantage of this access.

This type of bill is significant to gender equality and the feminist movement. Menstruation is something many women deal with once a month. About half the women from 14-21 in Scotland stay home from work or school when on their period because of not being able to afford products or just generally feeling ashamed for having one. “I’ve heard awful stories of people who have periods having to miss education due to a natural part of their lives, just because they couldn’t afford products,” Florence said when discussing her experiences with the new bill. Having free access to period products will help end period poverty and help reduce the unneeded stigma around menstruation. When asked what she believed the benefits of this type of bill was, Florence stated, “The more ‘normal’ we present feminine hygiene, the more normal it will appear to introduce wider conversations of feminism.” This bill also opens a discussion about poverty and looks forward to more aid for those in poverty.

The implementation of bills like this is being pushed in developed countries worldwide. Feminist groups urge those who have the ability and money to create this bill to follow in Scotland’s footsteps. So how does this type of bill relate to the U.S.? The 64% of women who cannot afford period products in the U.S is more than triple the percentage of women in Scotland. A study showed that almost half of American women have had to choose between buying food and buying their menstrual products. This is a pressing issue in the U.S., especially with 34 states having taxes on tampons, labeling them “luxury items.” The same type of stigma in Scotland surrounds periods in the U.S as well, with 1 out of 5 girls not feeling comfortable buying period products and missing school because of their periods. In 2019, there was a bill introduced, the Menstrual Act for All, by Congresswoman Grace Meng. This bill would have ensured that public schools would get federal funding for menstrual products, incarcerated and homeless women would gain access to the products, and Medicaid would cover period products. However, the bill was directed to a subcommittee in May of 2019 and is still in the introduction phase. Considering the drastic need for period product accessibility in the U.S, it is crucial to look towards our allies, such as Scotland, for solutions.

The Period Products (Free Provision) bill is a step in the right direction for women and those in poverty in Scotland. Understanding the need for period product access for women is now being seen as something doable. Five hundred million women should not be left out of the consideration of their governments. Women cannot control whether or not they get their period, but the government can control whether they can access the products that will help them.