Perseverance Makes an Appearance on Mars 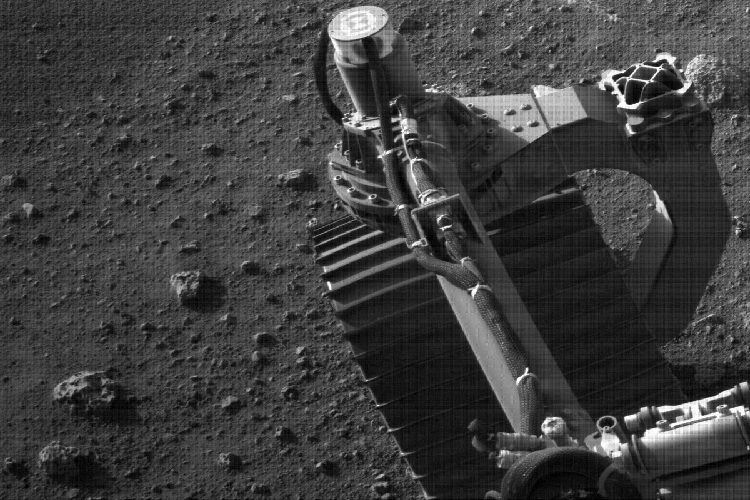 A photo taken by the Perseverance rover capturing the surface of Mars. photo courtesy of NASA

The Perseverance rover has reached the surface of Mars in search of ancient life.

On July 30th, 2020, the Mars rover Perseverance was launched from Cape Canaveral Air Force Station in Florida. It took seven months for mankind’s most sophisticated rover to make its journey to the Red Planet. It entered Mars’s thin atmosphere and underwent “seven minutes of terror” as it made a difficult landing on the planet’s surface, thus marking February 18th, 2021 a crucial date in Mars exploration. The rover landed on the Jezero Crater in the Isidis Planitia region, which was home to an ancient river delta that could now contain the remains of microbial life that could have lived in Jezero. The rover’s mission is to search for signs of ancient life, explore the Jezero Crater, collect samples of rock and regolith with hopes of returning to Earth, and demonstrate technology that would aid future missions. The Mars 2020 mission would allow humans to understand more about the surface of Mars and the evolution of the planet with hopes of one day answering the fundamental question of whether life exists or has previously existed beyond Earth.

To be able to determine whether or not humans are truly alone in the universe, scientists first look to the past for insight. The Perseverance rover has four goals all meant to help mankind take the next step in Mars exploration. The first goal is to try to answer a question that has been asked by millions across time, including Kenneth Williford, a deputy project scientist on the mission who wondered, “Was Mars ever a living planet?” The Perseverance rover can help answer this question, as it helps scientists study the surface of the red planet by collecting rock samples. These rock samples contain a record of how the environment was when it formed, thus allowing scientists to discover the geological processes and history of the planet. The second goal of the rover is to characterize the climate of Mars. By looking at the past climates of the planet, scientists can search for areas that could have once sustained life. The third goal is to understand the origin and evolution of Mars with the help of the rover, as it is equipped with the technology to search for rocks that formed in water. Dr. Williford elaborated on this search, stating in a New York Times article that scientists are also looking for “the elements, the minerals, the molecules, the organic molecules that are associated with life — all those things occurring together.” By being able to collect these materials, scientists are one step closer to the truth about Mars. The last goal is to prepare for human exploration, as the rover is testing technology that extracts oxygen from the planet’s atmosphere. By sending the rover with scientific equipment, scientists would be able to identify how the natural resources present on Mars can help sustain human life, and knowing the weather patterns would help future explorers predict the weather on Mars. All these goals are meant to bring mankind closer to answering fundamental questions about the universe. George Tahu, the National Aeronautics and Space Administration’s (NASA) Perseverance program executive, stated, “[This new technology will] gather science data in ways that weren’t possible before.”

Along with the Perseverance rover came Ingenuity, the first-ever helicopter to fly on another planet. The Ingenuity helicopter is a demonstration of new and advanced technology; therefore, it has no mission and does not carry any scientific equipment. Harvard Grip, Ingenuity’s chief pilot at NASA’s Jet Propulsion Laboratory (JPL) expanded on this by stating, “The Wright Brothers showed that powered flight in Earth’s atmosphere was possible, using an experimental aircraft; with Ingenuity, we’re trying to do the same for Mars.” This is a huge achievement for NASA and the world, for it is incredibly difficult to fly a helicopter on Mars due to its thin atmosphere, power requirements, and limited communications with scientists on Earth. Furthermore, the obstacles that Ingenuity faces are still not over; the helicopter must safely deploy to the surface from the Perseverance rover, keep warm throughout the extremely cold nights, keep itself charged by utilizing the solar panels on its roof, and maintain communications. Despite the many obstacles to come, Ingenuity’s engineering is ground-breaking and will take Mars exploration in a new direction.

The Mars 2020 mission will prove to be a crucial turning point in Mars exploration, with the hopes of one day humans inhabiting the red planet and learning about the origins of not only Mars but the origins of mankind.