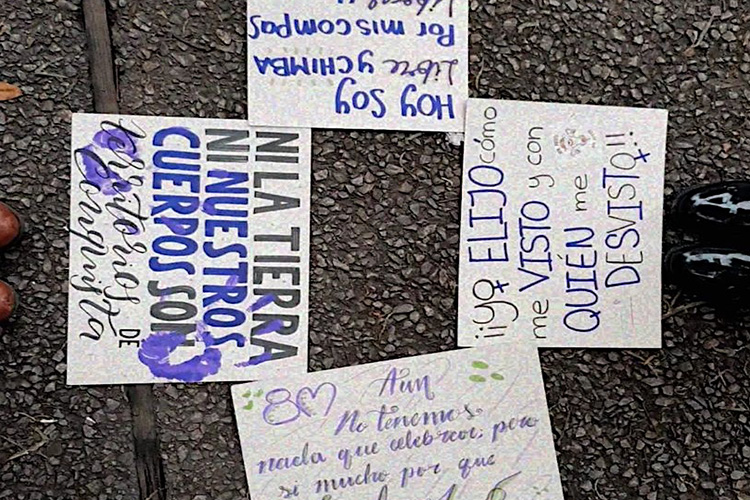 Colombia is the latest Latin American country in broadening access to abortion after banning and restrictive laws backlash in the United States. photo by Male Toscano

Abortion is still an active debate, but how much of it is an actual matter of agreement or disagreement?

Throughout history, pregnancy has been revered. It is the creation of life and hope for the future. A baby is sacred no matter the culture, species, or religion, however things are not always as simple or given as they should be. Babies and children are not always met with loving homes, fulfilled basic physical and emotional needs, health guarantees, and emotionally prepared parents.

According to the Adoption and Foster Care Analysis and Reporting System (AFCARS), developed by the Children’s Bureau in September 2020, there were 407,493 children in foster care, from whom only 57,881 were adopted. The four main reasons these children ended up in foster care were neglect, parental drug abuse, the caretaker’s inability to cope due to physical or mental illness, physical abuse, and inadequate housing.

The foster care system has been unable to provide the best conditions for all children. A study from the University of California highlights the heightened risk of mental and physical health problems children in the system face “ranging from learning disabilities, developmental delays, depression, behavioral issues, asthma and obesity.” The pandemic also brought out new issues as the National Broadcasting Company (NBC) news reported that “in Texas, children in foster care… reportedly contracted COVID-19 at nearly double the rate of the general population.” Kids were sent from foster placement after foster placement due to caregivers concerned with health risks, creating a new wave of instability in the children’s already chaotic lives.

Then, there are cases of abuse and death in the families where foster kids have been sent to. Families are deeply monitored and investigated before a kid is sent to these families, but follow-ups tend to be scarce. In the podcast, “Unsafe In Foster Care,” under Latino USA, journalist Deepa Fernandes investigates child deaths in adoptive homes in Los Angeles County. She focuses this two-part podcast documentary on Joseph Chacon, a young boy who died in the care of the foster care system, in the same foster family where a baby by the name Draco Ford had died before.

Pregnancy is a life-changing experience. A woman’s body and life are never the same after a baby-whether the dad is present or not. There are physical and emotional changes, like cravings, muscle and joint pain, inflammation, weight gain, general discomfort, and peripartum depressive disorder, or long-lasting health consequences like increased risk of cardiovascular disease, heart disease, diabetes and stroke for women with gestational diabetes, preeclampsia (a condition marked by high blood pressure, swelling and signs of damage to the kidney or liver), preterm delivery, and the possibility of death during birth. Around 6 to 18 percent of women with a C-section delivery will end up with chronic pain in their scar according to physical therapist Jennifer Wasserman who studies chronic pain after C-sections.

Pregnancy and parenting are difficult in the best of circumstances, but what happens when pregnancy is not desired?

“Reproductive rights exist because abortion exists. If abortion is not an option, then, do reproductive rights come to the question?” stated Bridget Couch, Restorative Justice Coordinator and sponsor of the Black Girls Rock Club at Thomas Jefferson High School. According to the Merriam-Webster dictionary, reproductive rights are a woman’s right to choose whether or not she will have a baby-whether she wants and considers herself prepared or capable of being a mother, but in today’s society, it is not such an easy decision.

“According to the Guttmacher Institute, a US-based reproductive health non-profit, the abortion rate is 37 per 1,000 people in countries that prohibit abortion altogether or allow it only in instances to save a woman’s life, and 34 per 1,000 people in countries that broadly allow for abortion, a difference that is not statistically significant,” explained Amnesty International, a global movement advocating for human rights around the world. Despite the fact that 6 out of 10 unintended pregnancies end in an induced abortion, according to the World Health Organization (WHO), the procedure is still widely controversial and banned in multiple places around the world. Almost 45% of abortions are unsafe and lead to maternal deaths, physical and mental health complications, and social and financial burdens for women, communities, and health systems. “Abortion is a topic that is always going to war with your morals and womanhood. After all, you are deciding whether to give life or take it, and thinking that you can simply decide that will never be an easy topic. Life is sacred,” Couch explained.

In the last year, the United States’ public health has taken a hit. After the Supreme Court agreed to hear a challenge to Mississippi’s 15-week abortion ban, the door opened to revise the 1973 Roe v. Wade court decision where the right to abortion under the 14th Amendment was constitutionally protected. Although this led to some states enacting policies to increase abortion access like California by covering abortion services in health plans and Colorado passing a law to protect abortion in the state, 23 other states passed new policies and laws to ban or restrict abortion completely. “Abortion rights are not a matter of agreeing whether you would do it or not. You are the only person who knows that and you will decide based on morals, religion, and circumstances. You might not agree with it like I do. But, someone else might need that option and they should have it,” Couch affirmed.

Although the United States has moved towards restricting abortion, many Latin American countries have moved in the opposite direction. Among them, Colombia’s Constitutional Court legalized abortion during the first 24 weeks of pregnancy last February. It is the first step towards more acces to abortion since its partial decriminalization in cases of rape, fetal malformation, and danger towards the woman’s health back in 2006. “I cannot tell you whether or not you should have that baby. Especially, when you might have been put in a situation where you didn’t have any say like rape or abuse. I might not agree with abortion because my morals [and] my Christianity do[es] not align with it, but I think for those who at least need the option, they need to have it,” Couch finalized.