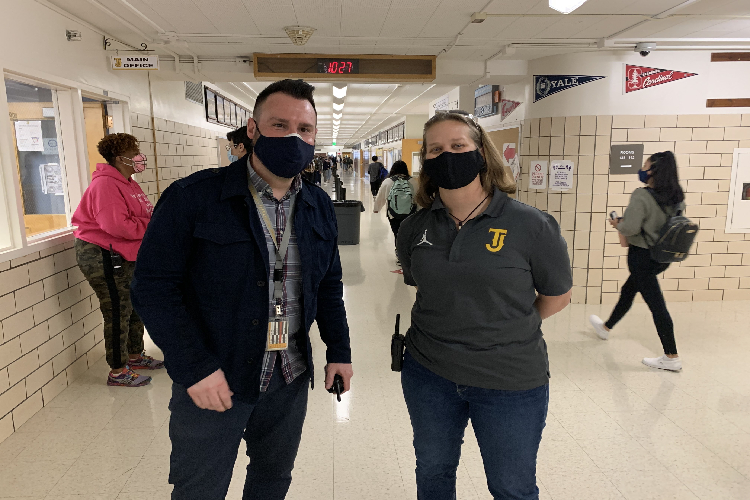 Caption Learn to Lead focuses on professional development and staff growth; both Michael Christoff and Paula Hammel have benefitted from participation in this program. photo by Nakya Castille

For the first two weeks of the second semester, Ms. Hammel was acting principal, doing her job as well as Mr. Christoff’s.

On January 5th, the first day students returned from winter break to start the second semester, Assistant Principal Paula Hammel worked as acting principal for two weeks. From January 5th to January 15th, Hammel was not only doing her job as assistant principal, but also the job of current Principal Michael Christoff. This was a positive yet challenging experience for Hammel, as it filled her plate with double the work, forcing her to learn new habits. Christoff was not on vacation during the time of this program; he was doing some behind-the-scenes work to help out TJ.

Hammel is a participant in Learn to Lead, a program that focuses on developing new skills and preparing staff members for a principal position. Hammel mainly learned new tactics to help with the overload of work, including a new organizational structure for her work. The new structure was based around the calendar and marking the upcoming things she had to get done. She also learned the importance of letting things go and accepting that there was only so much she could do at one time. Through watching Christoff attend to his duties at TJ, Hammel picked up on a few things to give her an advantage during the two week challenge. She explained, “I continue to learn school processes from Mr. Christoff. Much of this centers around collaboration and honoring the voices of those whom various decisions impact.”

During her time as the acting principal, Hammel had new duties and responsibilities, primarily around setting up the semester for in-person learning and allowing the school to get a running start on the second semester. Hammel helped to start the virtual semester, which is no easy task, by connecting with students, staff, and parents. The experience was very significant to her work at TJ because it allowed her to grow through a new position. With the new experience, Hammel explained, “I appreciate our staff immensely, as they gave me feedback to help guide decisions, spoke into their decisions to create a broader impact, and were so encouraging! I cannot say enough about how everyone at TJ is a team!”

Christoff was a part of the same program as an assistant principal under Susan Morris-Sherer. Six years ago, he was supposed to act as principal for the first two weeks of the second semester to train. Unfortunately, Morris-Sherer tore her rotator cuff, forcing her to get surgery, which led Christoff to be the acting principal for the entire month of January in 2014. Now, Morris-Sherer is currently a principal at McAuliffe Manual Middle School, so Christoff transitioned into the principal job at TJ after being in the program. Christoff detailed his experience from his time in Learn to Lead, saying, “For me it was a great experience; it gave me an idea of the sense of how much stuff there is to do and how much you have to keep track of.”

Christoff was planning on taking the two weeks at the beginning of January to visit different schools around the country to bring back ideas to help out TJ. The time was supposed to go to professional development. However, due to the pandemic, he stayed back and regularly checked in on Hammel and the staff. Although the program is meant for training staff for the job of principal, Hammel has no intentions of leaving TJ. Now that Hammel has grown even more in her job she will be able to make a larger impact for all Spartans.