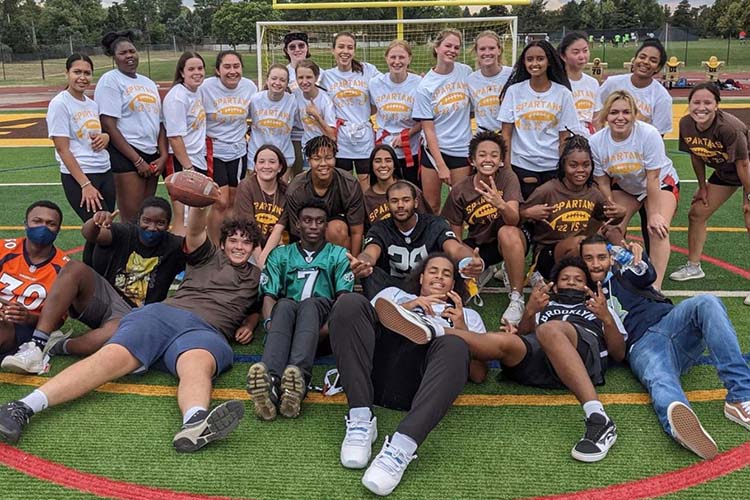 Juniors and seniors after the 2021 Powderpuff game, though some weren’t able to play. photo courtesy of Thomas Jefferson High School Instagram Page @tjspartans

For competitive reasons, some TJ sports did not allow their players to participate in Powderpuff.

Every year, Thomas Jefferson High School continues the tradition of the Powderpuff game. It is an opportunity for junior and senior girls to get down and dirty on the football field while being coached by football players from their respective classes. With the previous year of remote learning, students missed homecoming traditions, so they were more likely to take every opportunity to participate in them this year. The Powderpuff tradition, however, has a big fault: potential injuries.

To accommodate this, Thomas Jefferson volleyball coaches have historically held a policy against Powderpuff to ensure safety of their volleyball players. According to junior Laila Hilton, an outside hitter for varsity volleyball, “If I were to play, there is a possibility it could result in me getting injured or benched.” Under these circumstances, risking a sports career for a homecoming activity is not worth it. She continues, “As part of both leadership and the lady spartans volleyball team, I would have liked to participate in Powderpuff, but I understand why I wasn’t able to. I wouldn’t want to risk my season for that.¨

Along the same lines, flag football injuries, although rare, have been prevalent in the sports world. According to the National Library of Medicine, out of 114 flag football injuries among girls over a four year period, “The type of injury was closely distributed among sprains, fractures, contusions, and strains. Collisions, with other players and objects, resulted in 64% of these injuries.” Collisions could potentially create a risk for athletes despite the fact that flag football is a non-contact sport. On the other hand, these injuries were evaluated over a four year period, so it is less likely that an injury would occur during an annual homecoming game.

The head coach of the gymnastics team, Molly Sifers, however, took a different approach. She believes that part of the high school experience is participating in homecoming activities such as Powderpuff. Although there is an associated risk, Sifers states, “This year we did a year and a half of everything remote. This [was] the first homecoming for many kids and the second homecoming for a lot of kids, and we just wanted to make sure they had the opportunity to do any of the activities that interested them because it is a big part of the high school experience.”

Maggie Kennedy, head of the 2021 Powderpuff game, explained that in terms of injuries caused by Powderpuff at TJ, there have been “some turf burns, but nothing that is a serious injury.” Due to this, most students who partake in sports have not needed to cut their season short due to Powderpuff.

For elite sports players, the choice lies between the coach and the student. Athletes have to determine what is the greater sacrifice: a successful season in their sport, a possible college athletic career, or a football game during homecoming week after a year of remote schooling.